Housing in Athens Is Getting More Expensive, and SPLOST Aims to Fix That 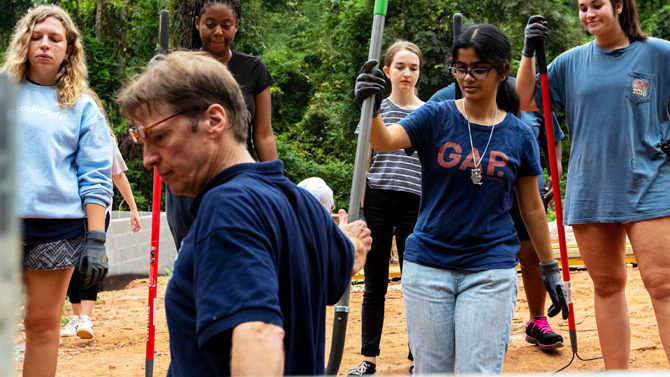 Between poverty and rising housing costs, the quantity and quality of housing for lower-income people is declining in Athens. The Athens-Clarke County government hopes to change this by putting $44.5 million towards affordable housing if the SPLOST 2020 referendum passes on Nov. 5.

What Is Affordable Housing?

The federal Department of Housing and Urban Development’s defines housing as affordable when a household can put 30% or less of its income towards housing. This varies from city to city.

Housing costs nationwide are increasing, and many people who work in what are considered middle class jobs can’t afford to buy homes, says Erin Barger, project manager at Envision Athens, a partnership among local institutions to create and implement a master plan for the community. She says that’s why the term “workforce housing” has entered the conversation.

According to Zillow.com, an online real estate database, the median home value is $184,500. Overall, Athens home values have gone up 6.3% over the past year. The median price of homes currently listed in Athens is $222,700.

With home prices so high, many residents are forced to rent. “The overall cost of housing has also increased rentals, and so affordable housing at a most basic level means an individual’s ability to securely and sustainably rent or own a home,” Barger says.

The median rent in Athens between 2013–2017 was $815 a month, according to 2018 Census estimates. Nationwide, 50% of renters are “housing burdened,” according to an analysis of Census data by Apartment List. That figure is 54% in Athens, and more than half of those are “severely burdened,” meaning they pay more than half their income for housing.

Locally, 44 percent of renters make less than $20,000 a year, according to an ACC workforce housing study. To put that in perspective, an individual who earns $20,000 can only set aside $500 a month for rent, following the 30% suggestion. “So if you’re cost burdened or housing stressed… that doesn’t leave any room for food, emergencies, savings, educational opportunities,” Fry says. “Even buying school clothes for your children to go to school becomes an issue.”

Why Is Athens Unaffordable?

Two common explanations as to why Athens is facing an affordability problem are the city’s longstanding poverty and the fact it’s a college town. To begin, there’s limited land where apartments and houses can be built.

“It’s a very difficult issue to tackle in a county that’s the smallest county in the state of Georgia… where almost 50 percent of its land is government or church,” Frye says. “That’s untaxable or unusable for residents.”

On top of a lack of land, the University of Georgia brings in college students with their parents’ checkbooks and credit cards. The ability of a college student to pay for housing is “very different than the rent payment ability of somebody who is working in the service industry,“ says Mayor Kelly Girtz. Rents at the downtown luxury student apartment building The Mark, for example, range from $840 a month for one bedroom in a four- or five-bedroom apartment to $1,475 for a one-bedroom. Adding to the problem, Girtz says, is the racialized poverty people have experienced in Athens for decades.

Since the University of Georgia and downtown are so centrally located, affordable housing is pushed outside, and only the affluent can afford to live in desirable in-town neighborhoods. But living in a central location is important for those who can’t afford a car and walk or rely on transit.

“Any real estate agent will tell you, anything within three miles of downtown, regardless of location, is super hot on the market,” Girtz says. “That means it’s challenging for someone who works near downtown and needs to find an affordable place, that maybe doesn’t have a vehicle or relies solely on public transportation.”

Affordable housing in Athens is unique in the sense that it’s scattered throughout the city, Girtz says. “Athens is very patchwork. You have affordable housing distributed from well past the mall on the Westside out to Winterville and everywhere in between,” Girtz said.

However, most affordable housing, including most public housing, is centralized in four high-poverty census tracts, he says, clustered around the Nellie B and Hancock Corridor communities. Those are the “epicenters of poverty” in the county, Girtz says.

What Can Be Done?

The biggest portion of funding comes from the federal government. Section 8 consists of vouchers for people to rent housing on the private market. Section 9 is the public housing funding that flows through the Athens Housing Authority.

Girtz says the most challenging affordable rental housing in terms of quality, maintenance and management are privately held properties like Bethel, “many of which have an out-of-town owner who collects those Section 8 vouchers from the federal government monthly, but doesn’t provide a whole lot of oversight, management or care on the properties themselves,” Girtz says.

This problem is why the county is stepping in. Girtz says the solution is public-private partnership.

The local government was one of the bigger players in displacement during Urban Renewal in the 1960s, when several African-American neighborhoods were razed, and that was partially what caused that situation Athens is facing now, Girtz says. It was called “slum clearance,” where black residents were uprooted and put in newly built projects. However, this “renewal” was more of a removal from their community.

“We’ve got to be a player in relieving some of these challenges today,” Girtz says.

Bethel was privately owned, but now the housing authority is stepping in and putting Section 9 funding into the complex, in addition to the $39 million in SPLOST funds, if it’s passed.

In addition, the mayor and commission asked the ACC Planning Department earlier this year to look into how the county can encourage private, for-profit developers to build affordable housing. Some ideas include providing free water and sewer hookups, building sidewalks or helping with stormwater costs.

“If you look at disinvestment, it’s going to happen when someone doesn’t have the means or the access to resources,” Girtz says. “When you can join people with resources with those without… you stabilize the ship instead of it sinking… like it’s sunk at Bethel Midtown, Athens Gardens, Clarke Gardens and Rolling Ridge, and others.”

The goal is to “push poverty rates down and home ownership rate up,” Girtz says. That’s why several of the players are turning towards job creation and increasing owner-occupied housing.

The ACC government also receives about $2 million annually from HUD, much of which is spent on building affordable single-family homes. ACC allocates those block grants to organizations like Habitat (which uses volunteer labor to keep costs down), the Athens Land Trust (which holds the land a house sits on in trust to keep it affordable) and the Athens Housing Authority (which uses federal tax credits to subsidize construction). Those houses are sold to people making 60–80% of Athens’ median income.

Density remains an issue, though, with residents often pushing back against projects that add density to neighborhoods. Frye has been pushing the mayor and commission to change its zoning laws so that smaller, less expensive homes can be built closer together. Last month, Habitat broke ground on two “kinda tiny” homes off Hawthorne Avenue that are less than 800 square feet.

“We really need to make data-driven decisions as a community on how to utilize those funds and try to step away from the concept of high density low income housing,” Frye says. “Those are failed experiments from the ’50s and the ’60s. We have several examples of that.”

More information on the SPLOST affordable housing project is available at accgov.com/splost.