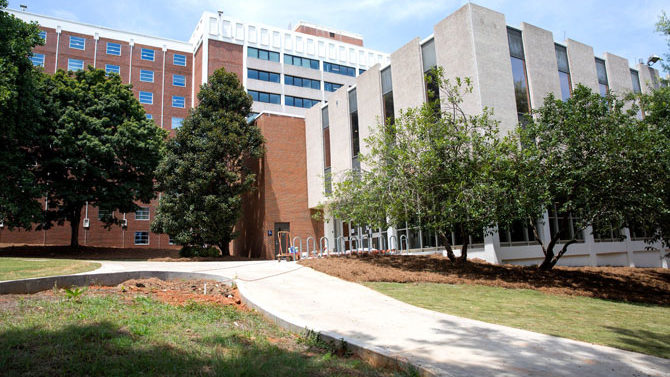 At least three times this semester, Jewish University of Georgia students have found anti-Semitic vandalism in their dorms.

Ariana Dinberg, a freshman, said the first incident happened in August. Dinberg said a poster with the letters of Sigma Delta Tau, the Jewish sorority on campus, was torn off her door. She said she reported the incident to her resident assistant.

“It already made me feel almost ashamed,” Dinberg told Flagpole. “But when this happened, I hated that people knew someone Jewish lived there based on my poster, and the reaction from whoever did this was immediate anti-Semitism.”

She said she chose to take down the poster instead of taping it back up so that another incident wouldn’t happen. However, Dinberg said the words “All Heil” with a swastika underneath were written on the white board outside her dorm in October. “I was shocked, but more hurt,” she said. “I know anti-Semitism has always existed around the world, but I also think it’s become more prevalent lately.”

Dinberg said she contacted the Equal Opportunity Office, University of Georgia Police Department and University Housing about the incident. According to the police report, there was no apparent connection between the August and October incidents. As of Oct. 15, Dinberg said EOO informed her that the university was unable to identify the person or people responsible.

Flagpole confirmed two reported cases where swastikas were drawn on doors of Jewish students’ rooms. Another UGA student reported she returned to her dorm room in Russell Hall on Nov. 9 to find a swastika drawn on laminated name tags on her door.

On Nov. 11, the student reported it to the Equal Opportunity Office, which advised her to file a report with UGA police. The Nov. 18 police report states that the symbol was drawn with a black dry erase marker on the student’s door. The victim told police that swastikas were drawn on other doors on her hall. “A total of 18 doors that could have potentially contained the drawings,” the report says. However, the symbols had been erased, so police were unable to confirm that.

Since the drawings were erased, police said there was no damage to property, and the incident did not warrant a criminal trespass investigation.

“We are aware of reports of offensive symbols written on the message boards on the doors of rooms in two residence halls on campus,” UGA communications director Greg Trevor said in a statement. “Whenever the university receives complaints of racist or discriminatory conduct, we refer such matters to our Equal Opportunity Office in accordance with applicable laws and policies.”

The anti-Semitic vandalism gained more attention after the Young Democrats of UGA posted a press release on Facebook documenting the incidents and condemning the acts. “We are a community which is stronger when we refuse to accept hate in any form and combat prejudice and xenophobia whenever it arrives on our campus,” according to the Young Dems’ statement.

Max Harris, a Jewish student at UGA who is a member of the Young Democrats and the Student Government Association, said he was comforted by the fact that students were alarmed about these actions on campus. But he was not shocked to hear it was happening at UGA. “I was very disappointed that national events that I see happening all the time made their way to UGA, because I know UGA to be a very welcoming place… But I was also jaded by it as well,” Harris said. “If you look at this from a global perspective, this wasn’t unique.”

Cas Mudde, an international affairs professor in the UGA School of Public and International Affairs, has spent the majority of his career researching political extremism, populism and far-right movements in Europe and the United States. Mudde said there has been anti-Semitic and racist vandalism on U.S. campuses across the country. Just this month, George Washington University, Arizona State University and Syracuse University have responded to anti-Semitic acts on campus.

Mudde said the reported incidents at UGA are “deeply disturbing, as they seem to target Jewish students by sending clearly anti-Semitic and thereby threatening messages.”

“The university should take these incidents very seriously, even if they look more like ‘pranks’ by fellow students than targeted actions by far-right organizations,” Mudde said. “UGA should not tolerate any type of bigoted vandalism, whether it is meant as a prank or political intimidation.”

Harris said it’s important to realize Jewish college students are only two generations from the victims of the Holocaust. “Our parents have a very close relationship with the Holocaust, in particular. We’re only one step away from discrimination at its worst form,” he said. “So, anything like this happening is very jarring.”

Moving forward, Harris said the Jewish community will continue to organize and apply pressure when necessary on people in leadership positions to act and protect minorities. “When we combat discrimination, we have to do it together,” he said.

Editor’s Note: This article originally ran on Grady Newsource, a newscast and digital publication staffed by Grady College of Journalism and Mass Communication students, for a class assignment.