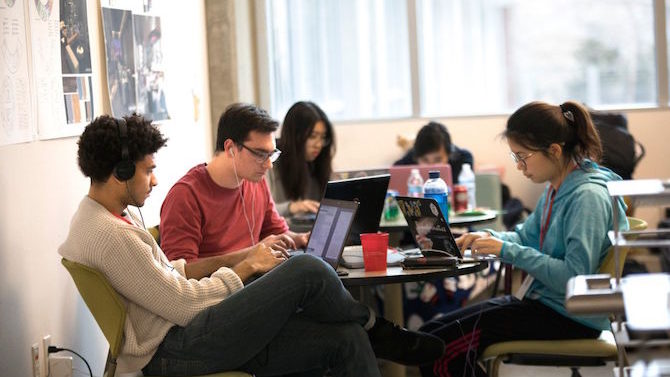 The University System of Georgia is raising the bar for the Class of 2023. Beginning this fall, all incoming freshmen are now advised to take 15 hours, instead of the previously advised 13 or less. In addition, students are no longer allowed to be undecided majors. This is all part of the USG’s “Momentum Year” initiative.

Several states have adopted components of the Momentum Year, such as requiring students to choose a focus area or take a certain number of hours, but USG Vice Chancellor for Communications Jen Ryan says this initiative is the first of its kind nationwide.

Since 2011, 21% more Georgia students are earning their degree, while enrollment numbers have only increased by 2%, USG Chancellor Steve Wrigley said at UGA’s Biennial Institute, a training session for state legislators, in November. “More students are graduating, and it’s costing [the state of Georgia] less,” he said.

In 2017, the attainment rate at the University of Georgia hit an all-time high, with 66% of UGA students earning their degrees within four years. For comparison, the average four-year graduation rate for SEC institutions is 45%. The USG wants to keep the trend going.

Wrigley noted that 50% of undecided majors nationally drop out before they select a major. Also, students who pass English and math in their first year are 10 times more likely to finish their degree.

These figures are reflected in two key policy changes this fall to keep students in a “productive academic mindset,” Ryan said.

Students are no longer allowed to be “true” undecided majors. Students now must choose a “focus area,” such as business, education, STEM, arts, humanities, health professions or social sciences. For example, if a student is interested in marketing but isn’t sure if marketing is the right major, that student could choose to focus on the broader category of business before declaring a major.

Students will also be required to take nine hours in that focus area their first semester. This will push students to stay on track and take classes that will count towards their degree, Ryan said.

Data provided by USG states that freshmen who take at least three courses, or nine credit hours, related to what they think they want to major in are 40% more likely to graduate than students who do not. “Engaging students on their potential majors from the outset will help improve performance, allow them to graduate earlier and with less debt, and help them find a good-paying job,” Ryan told Flagpole.

The other big change is “15 to Finish.” For years, college advisors have encouraged incoming freshmen to take 13 hours or less their first semester or two. Just three years ago, I was an incoming freshman who was advised to take a lighter load my first semester, even though I graduated with a 4.0 in high school. This gave freshmen a chance to get the hang of what college life was all about, and a safety net in case they fell into the trap of going to too many Thirsty Thursdays.

With the Momentum Year initiative, students are highly encouraged to take 15 hours a semester, or 30 hours per academic year, to stay on track. Recent studies conducted in other states have found that students who take at least 15 hours each semester their freshman year are likely to be more successful than their peers who choose to take less, Ryan said.

In the end, this plan comes down to efficiency. University officials expect it to be a win-win. More  students will be able to graduate on time, which will save money both for them and for the state.