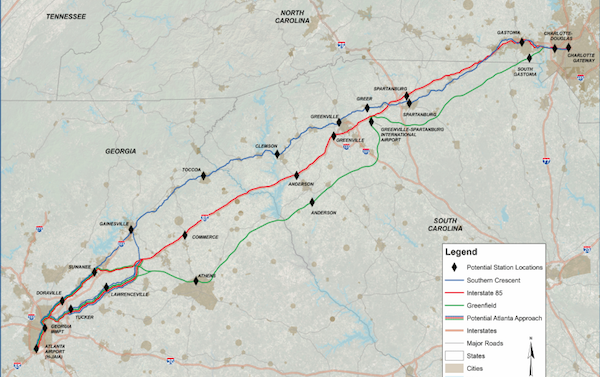 A map of the three proposed routes. The “greenfield alternative” through Athens is in green.

The Federal Railroad Administration and the Georgia Department of Transportation are currently taking public input on three proposed routes for high-speed rail between Atlanta and Charlotte, one of which would run through Athens.

The “greenfield corridor” through Athens offers the highest speeds—125 miles per hour for diesel or 220 mph for electric—as well as the highest potential ridership, carrying up to 6.3 million people in 2050.

Another route, along I-85, with the nearest stop in Commerce, would have similar speeds and ridership, but at a much higher cost of $13.3 billion to $16.4 billion, compared to $6.2 billion to $8.4 billion for the greenfield corridor.

The third alternative would run along the existing Silver Crescent track through Toccoa and Gainesville. It would be much cheaper at $2 billion to $2.3 billion to upgrade those tracks. But it would also top out at 79 mph for diesel and 110 mph for electric, and carry far fewer people, about 940,000 to 1.1 million in 2050.

Athens-Clarke County’s downtown Multimodal Transportation Center was built with the “Brain Train” to Atlanta in mind, but that train never materialized.

A public hearing has not been scheduled for Athens, but GDOT is holding one in Atlanta this evening. Others are scheduled for Greensville, SC on Wednesday and Charlotte on Thursday.

GDOT is also accepting comment online—here is a link to the form—as well as by mail. Address written comments to: