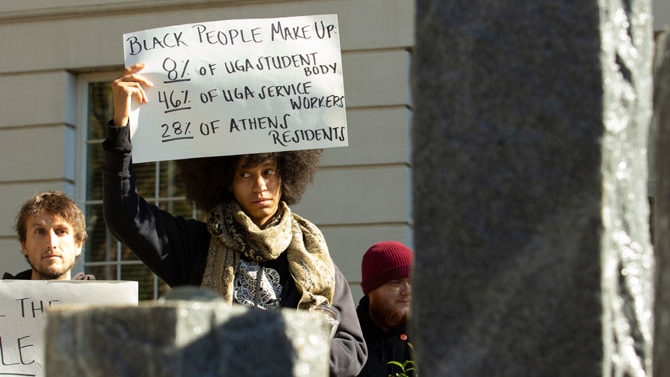 Pressure is mounting on the University of Georgia to formally acknowledge the history of slavery on campus.

The university’s Student Government Association passed a resolution in March urging the administration to dedicate the Chapel bell and a future monument on North Campus to enslaved individuals. The documentary Below Baldwin, about the discovery of slave remains underneath Baldwin Hall, premieres Mar. 31 at the Morton Theatre. And next month, the UGA Faculty Senate is expected to release a report on Baldwin Hall.

Still, the administration has been quiet since the dedication of a memorial at Baldwin to the approximately 105 individuals whose remains were discovered buried near the building during construction—a ceremony at which none of the speakers mentioned slavery.

“At some point, the university is going to have to respond,” says Joe Lavine, the director of Below Baldwin. “That’s not because of the film. That’s because the years of work that community organizers have put in, and the work faculty and students have put in.”

The film recounts a series of events that started in November 2015, when construction workers discovered human remains while working on an expansion of Baldwin Hall, which sits on top of an unmapped portion of Athens’ first cemetery on Jackson Street. While UGA initially identified them as white, subsequent dating and DNA testing revealed that most of the remains likely belonged to enslaved black people, who may have been ancestors of current Athens residents.

Some members of the local African-American community criticized UGA for not consulting with them, and felt that the remains should have been moved to one of Athens’ two historically black cemeteries. Nonetheless, UGA followed through on a recommendation from the state archaeologist to reinter the remains underneath a memorial at Oconee Hill Cemetery, and President Jere Morehead appointed a committee that recommended building another memorial at Baldwin Hall.

The film also highlights how the university’s legacy of slavery persists today, Lavine says. Athens currently has a 38 percent poverty rate, which disproportionately affects black residents, and UGA is by far the largest employer in Clarke County. While African Americans make up 5 percent of faculty and 7 percent of UGA administrators, they make up 44 percent of service and maintenance workers. Administrators make an average of $144,000 a year, while maintenance and service workers make $27,000 a year, according to Lavine.

“The employees that do not make a living wage or have health benefits, they are working for slave wages. So in a sense, it’s a kind of a slavery,” Linda Lloyd, executive director of the Athens Economic Justice Coalition, says in the film’s trailer.

Lavine started making Below Baldwin in January 2018, while taking a documentary production class at UGA. After graduating that May, he decided to continue the project.

“When I got a chance to speak with Fred Smith Sr., Linda Davis and others who were intimately connected with what happened, I was taken by the story and felt it was critical that I do what I can to amplify those voices and amplify all the community efforts that are taking place,” Lavine tells Flagpole.

As Lavine was putting the finishing touches on his film, the SGA voted on a resolution Mar. 5 urging UGA to build a monument on North Campus to all people who were enslaved on campus and to dedicate the Chapel bell to two enslaved men who were utilized as bell ringers. The resolution passed 32-3.

Jessica Douglas and other SGA senators suggested the university construct a permanent monument on North Campus in collaboration with black community members to serve as a permanent reminder of slaves’ “sacrifices, struggles and lasting contributions to the university.”

Thirteen people who were enslaved at the university have been identified: Dick Cary, Davy Hull, Billy Hull, Sam [Harris] Watkins, Bishop Lucius Henry Holsey, Lewis “Old Tub” of the Christy family, Louis of the Demosthenian Literary Society, and Alfred, Caroline, Elvir, Hanson, Louisa and Sophia of the Church family, according to the resolution.

Cary and Watkins are two of the known “bell ringers” who rang the Chapel bell for religious services, emergencies and class changes. The resolution suggests that the bell be dedicated to Cary and Watkins.

“This needs to be something students know about when they ring the Chapel bell and when they’re using that for pictures and tradition. We want to make sure that part of history is included at the Chapel bell,” Douglas says.

For Douglas, who introduced the SGA resolution, the memorials at Baldwin Hall and Oconee Hill Cemetery are not enough.

“There’s this conception that, because a memorial was placed at Baldwin Hall, that we’ve sort of checked the box, and that that’s all we really need to do,” Douglas says. “I want to continue the conversation and grappling with our legacy of slavery.”

The SGA resolution urged the university to be “a model within higher education for research and transparency” regarding the university’s history of slavery. A first step in doing that would be to join Universities Studying Slavery, a multi-institutional collaborative project based at the University of Virginia that works to contribute research about universities’ involvement in slavery.

Mokah Johnson, president of the Athens Anti-Discrimination Movement, says the university is simply not doing enough. “It feels like you’re pulling teeth just to get them to acknowledge the fact that there were slaves’ bones buried at Baldwin Hall,” she says.

Moving forward, Johnson says the university will have to be transparent and inclusive to show any effort to unify the community. “If the university wants to make more of an effort, they have to be more transparent, and they also have to be willing to have the voices at the table who have been advocating about this for quite some time,” she says.

Lavine agrees that UGA has not been transparent. “The university has done as much as they can do to disconnect what happened at Baldwin Hall from the university’s history of slavery and what that legacy means for the current political economy in Athens,” he says.

Lavine says it was difficult not only to get answers from the university administration, but from faculty members who had an interest in or were directly involved with the discovery. Many refused to speak on the record out of fear of pushback from the administration, he says.

Not so with Smith Sr., who was the first to suggest that the remains might belong to slaves, and later watched through a locked gate as those remains were unloaded in secret from a box truck at Oconee Hill Cemetery. He and Johnson want the university to devote more resources to finding out more about the individuals whose remains were uncovered and whether they have ties to the current Athens community.

“To me, what they did was so awful. They destroyed a burial ground in order to expand a building,” Smith says. “They’ve [made] an official decision on the subject, but they don’t want to have an earnest conversation about it.”

After Below Baldwin is screened Mar. 31, there will be a panel discussion among Smith, Davis, Lloyd, ACC Commissioner Mariah Parker and Wes Bellamy, a city councilman in Charlottesville, VA and University of Virginia political science professor. Bellamy wrote a book about Confederate monuments and led the effort to remove statues from Charlottesville. He also pushed a $4 million “equity plan” focused on marginalized communities through the city council.