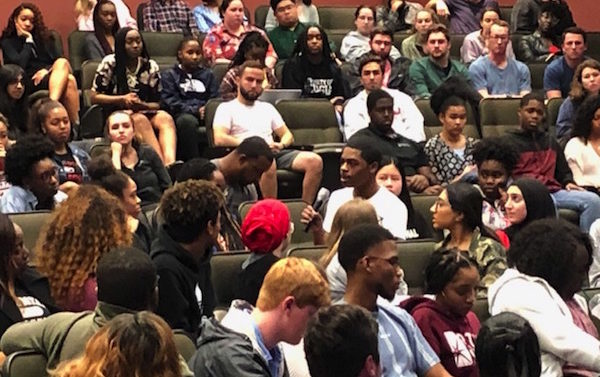 More than 200 University of Georgia students gathered at the Miller Learning Center Monday night to talk about a racist video that went viral over the weekend.

Black students who spoke at the “In Solidarity” event, organized by the Student Government Association and UGA chapter of the NAACP, said they were hurt but not surprised by the Snapchat video, which showed a white UGA fraternity member whipping another white student with a belt, telling him to “pick my cotton,” and using a racial slur. They also criticized the university administration’s response to the video.

Attendees nearly filled a 300-seat auditorium at the MLC. The event had to be moved from the Tate Center Intersection — a safe space founded after a series of racists posts on minority groups’ Facebook pages rocked the university in 2013 — because so many people turned out.

The purpose of the event was to allow students to express their feelings and give white students an opportunity to understand their perspective, according to Kaela Yamini, president of the UGA NAACP.

“Every year, every semester, I’ve seen something like this happen,” academic advisor Ricky Roberts said.

But few are reported. Black students and staffers described being second-guessed at their jobs, passed over for awards and sitting alone on a crowded bus — and constantly wondering if it’s because they’re black, adding to the normal stress of school and work.

“Fundamentally, this university has been built out of racism,” said Cameron Coleman, pointing to the slave remains discovered underneath Baldwin Hall and photos of white students in KKK gear and blackface in yearbooks as recently as the 1960s.

Senior Langston Leake said the video will likely color his memories of his time at UGA. The worst part, to him, was an off-camera student egging on the student with the belt to say the n-word.

“It’s the opposite of what we ask white people to do,” he said.

Coming from a nearly all-white high school, Leake said he’s used to being the only black person in the room, and there were times when someone said something questionable that he wished he’d pushed back on. Like several other speakers, he urged white people to call out racist statements amongst themselves.

Several students also predicted that the incident will discourage African Americans from applying to UGA, where only 9 percent of students are black. Some said they themselves caught grief from parents and friends for enrolling.

“I’m sure black student enrollment is going to plummet because of some racist video going around,” said Destin Mizelle, the SGA treasurer.

“I can’t talk to African Americans at my high school and tell them to come here, because stuff like this happens,” said a student who gave his name as Jordan. “I don’t even want to be here, honestly.”

While the national Tau Kappa Epsilon organization has expelled the four members involved in the video and suspended the UGA chapter, for many students, that’s not enough. Student Mark Norris criticized the “regurgitated statement” the administration puts out whenever an incident of racism occurs, and called for more concrete action.

The Equal Opportunity Office is investigating. Some speakers said the students involved in the video should be expelled from the university.

“If there are no consequences, it makes it easier for something like this to happen again,” said a freshman named Diamond.

Vice President for Student Affairs Victor Wilson attended the gathering, but a number of speakers said President Jere Morehead should have been there, too.

SGA President Ammishaddai Grand-Jean said he and other black student leaders met with Morehead in private earlier that day.

“He is aware. He is concerned,” Grand-Jean said. “He cares about what’s happening.”

But there’s a limit to what Morehead can do or say at the moment, given the ongoing EOO investigation, he said.

The SGA and NAACP devoted a portion of the meeting to identify steps to take next. Ideas included a commission or task force on racial issues, more collaboration between white and black Greek organizations, mandatory diversity and inclusion training or multicultural classes, and a greater focus on activism and social justice in the first-year curriculum and immersion programs.

Should I Date My Ex’s Friend?