Charlayne Hunter-Gault on Chess and Community, UGA Diversity and More 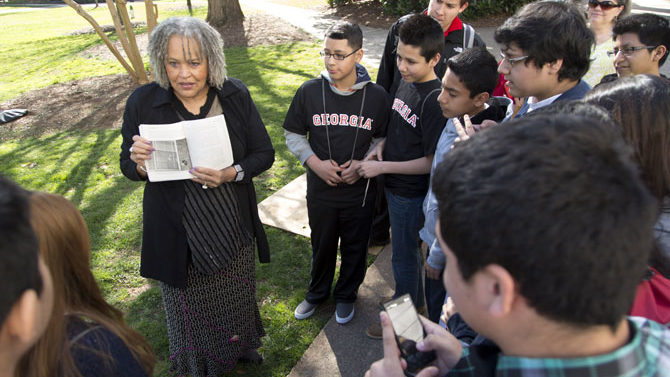 Charlayne Hunter-Gault will be forever known as one of the first two African Americans to attend the University of Georgia in 1961. But that was just the first step in a long and illustrious career as a journalist for The New York Times, CNN, PBS and other news outlets that’s taken her around the world, including stints as a bureau chief in South Africa.

Through it all, Hunter-Gault has stayed in touch with Athens, often returning to campus. On Saturday, Apr. 1, she’ll be the keynote speaker for Chess and Community’s fifth annual conference at the Georgia Center. (See chessandcommunity.com or The Calendar for more information.) The organization, founded by poet Lemuel “Life the Griot” LaRoche, mentors at-risk youth through the game of chess.

Hunter-Gault recently spoke to Flagpole about the conference and other issues facing the African American community in Athens and at UGA.

Flagpole: How did you get involved with Chess and Community? What made you want to keynote the conference this year?

Charlayne Hunter-Gault: I work part-time for the “PBS NewsHour,” and for the past year and few months now I’ve been doing a series of pieces on solutions to race called “Race Matters.” I had read about what Lemuel LaRoche was doing there in Athens, and it seemed a perfect thing because it’s a program that’s been very successful in working with young people of all races and genders, as well as police. So that drew me to it, and I did a brief chat with [LaRoche] on the phone and I was convinced this was a person I wanted to visit and see his program, which I did. We aired the piece a few weeks ago.

After that, he contacted me, because we really had a similar vision. I mean, I’m not a chess player, but I do believe that if we put our minds to it, and work hard at it, we can overcome racism and breakdown some of the stereotypes that exist in the minds of people and actually [exist] in reality. That’s what made me interested in coming back to meet the kids, because very few of the young people were there when I visited.

FP: Their chess-inspired motto is “Think before you move.” Why do you think that’s an important mission statement for young people?

CHG: Well I think that’s an important thing for all of us. To think about what you’re about to do before you actually do it… to give some thought to what your next step is going to be or what your next move is going to be. I totally embrace that. Although I’m not a chess player, I’m tempted now to learn it.

FP: What do you plan on sharing with the kids during your speech?

I want to share some of my own experiences and talk about what it is that has enabled me to travel the road that I have traveled, starting as a very young person, and the lessons I got from my parents and my village. Moving on to the University of Georgia, where I had a pretty trying entry. Then onto a life of journalism that has had its challenges… not challenges I’ve been able to overcome, but challenges that I’ve been able to meet, because many of the challenges I’m talking about are challenges of trying to tell people stories and to give voice to the voiceless. I just want to share a few things that might resonate with them, and I hope that I have an opportunity to learn from them, too.

CHG: I made my peace with the University of Georgia many years ago, and have always been there for them whenever they have called on me… But like many universities—public and private—there’s a lot of work to be done to not only live up to the mandate that they should have, which is to educate all young people who want to go there and qualify. But also, especially now, to prepare for the changing demographics that will occur in the next 30–40 years.

[The mandate] is not the only reason that universities should work harder to increase their diversity at every level, because that is a mandate that should’ve been followed over the years, just because it’s the right thing to do. Now there’s an urgency to it, because we’re going to have a completely different society in the next 30–50 years. It’s up to our institutions to prepare our students so that they can not only be good citizens, but that they can make a contribution. While I’m happy the university has come the distance it has come since Hamilton Holmes and I were there, it’s not just colleges and universities. In every layer of society, we have more work to do.

FP: What steps can UGA take to meet these changing demographics and a changing society?

CHG: I’m not going to tell [UGA] how to do their job, but as we talked earlier about the phrase “think before you act,” I think deep thinking needs to continue. I won’t say it hasn’t started, because I know people [at UGA] who have worked on diversity issues. We need to be conscious of where we’re going, and to involve people who have some ideas and who have some answers to these questions. I think it’d be important to listen to the students, also. They don’t have all the answers, to be sure, but nobody has all the answers.

I think the more we engage in discussion, sometimes they get difficult, but as long as we keep our eye on the prize, we can turn out good citizens who are prepared to make a contribution in their homes, in their communities, in their cities, states, countries and in the world. Martin Luther King Jr. talked about how we’re all wrapped in a single garment of destiny. The world has become a lot smaller because of the communications that we have today, and it’s going to get even smaller. We’re going to be able to see ourselves in other people, and we want other people to see us, so we are going to have to figure out ways in which we can make all of our lives better, and prepare for the coming generations.

FP: How familiar are you with the Baldwin Hall situation, with the reburial of the bodies found there? What are you thoughts?

CHG: When I was first asked about it, there hadn’t been any resolution, and there still is no resolution. [Editor’s note: Click here for an account of events after this interview was conducted.] But I think that the university is moving in the right direction, to involve people who are affected and others in making a plan that is agreeable to everybody. The other thing is, it’s not for me, all these miles away, to tell people how to run their affairs from a distance, but I am familiar with the issue.