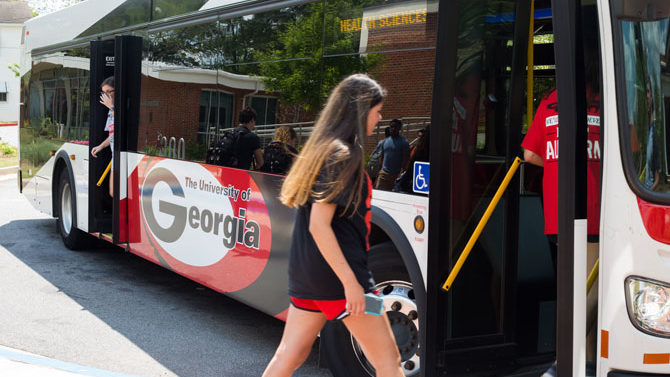 “At peak times of the day, Lumpkin Street is like a parking lot,” says Robert Holden, associate vice president in charge of the University of Georgia’s Auxiliary Services. Anyone driving, walking, biking or riding a bus “at peak times” can attest to the standstill traffic around campus—one of the problems Holden and Don Walter, director of UGA Transportation and Parking Services, are challenged with solving.

As demand for services has increased, the answer is usually to “add, add, add,” Holden says, but “UGA’s transportation fees have been frozen for several years, and the reality is they should’ve gone up to cover these expenses.” The $116 transportation fee that each UGA student pays is not enough to balance the estimated $300,000 deficit in the Parking and Transportation budget.

With the help of the both the incoming and outgoing UGA student governments, as well as engineering consultants from VHB, a clearer picture of what a streamlined, financially efficient campus transit system could look like is starting to emerge.

SGA has proposed that the five current night bus routes that run between 7 p.m.–6 a.m. could be condensed into two routes beginning in fall 2017. “Through our discussions with students, professors, faculty and staff, we found that the routes are too infrequent and not going where people are,” says Houston Gaines, the 2016 SGA president. The solutions they presented were not only the result of campus feedback, but ridership data and SGA representatives riding the night routes to identify problems, as well.

By condensing and simplifying the five “spaghetti routes,” as Walter puts it, to two, more buses could travel on each, reducing the wait time from 20 to 15 minutes. Operating service would be extended to 3 a.m. on Thursday, Friday and Saturday nights. Night Route 1 would replace the current Night East West and Night Family Housing routes. Night Route 2 would replace the Health Sciences and Milledge routes, running from the Normaltown campus down Prince and Milledge avenues, then back up through the main campus to downtown, and reversing direction after 11 p.m. The proposed maps can be viewed here.

Yet SGA agreed that students who rely on UGA buses at night should not be left high and dry, especially those who have already signed leases to apartments in the area, are without a car and are relying on those rides for the coming year. “There is a significant number of students wanting to maintain bus services to Riverbend, so we have to find at least a one-year solution,” Gaines says. “This is not a minor issue. There are students who need to get to and from campus after 7 p.m. This whole process is about listening to students.”

Of course, everything at this point is just a proposal. “We didn’t do a good job about telling people what was happening. What we put out was a draft. It wasn’t anything official,” Gaines says.

Yet the goal is still the same, even with a new group of SGA leaders taking over. Cameron Keen, the newly elected SGA president, says that while there may be “a little confusion about who is in charge during this transition period, we are working to make sure all students are heard and let them know we are listening.”

While Campus Transit’s job is to move students, faculty and staff within campus, not to and from off-campus residences, Holden agrees that UGA should not immediately stop services to Riverbend without providing proper notice. He says UGA is looking to have a discussion with Athens Transit about a partnership to provide service to the area. “We aren’t looking to leave people stranded,” he says.

SGA may be able to work with apartment complexes like those on Riverbend on providing a shuttle for students, Gaines says, but “we must find a solution that provides more frequent, better service that would be a significant improvement for all students.”

When evaluating the late-night routes, safety was a big concern for students, says Gaines. Keen ran for SGA president as a part of the “Ignite” ticket, whose platform was largely centered around increasing campus safety. So while the final plan for the proposed bus routes awaits approval from UGA Parking and Transportation, other changes are well on their way. High-resolution cameras will be installed on the inside and outside of buses, and lighting will be improved around campus and at under-lit bus stops. Walter, whose children attended UGA, says he also uses the buses, and is excited about extending its services because “buses are the safest form of transportation.”

Yet buses are not the only form of transportation on campus, and part of the larger vision of UGA Parking and Transportation is to provide alternative means for commuting to and from and within campus, Holden says. Last year, UGA received a grant for $10 million to purchase 19 electric buses that will replace the oldest buses currently running. Those new buses are expected on campus later this year, and as that money is released, Campus Transit already has plans for what to do with the rest. There are preliminary plans for a park-and-ride lot located outside of the Loop—administrators won’t give an exact location—where commuters could park and take a bus or the Greenway to campus. This would help push the number of cars out of campus, Holden says, and give cyclists and walkers a safe, accessible route to campus.

Bike racks are also going to be installed on UGA’s buses to help “fill the gaps” on campus without bike lanes, Holden says. Anything that helps eliminate the number of cars on campus will help make movement more efficient, he says.

Finally, as suggested in Athens’ downtown master plan, Holden says he could see the unused rail line through campus turning into passenger-carrying light rail to further decrease the number of cars on campus.

UGA Parking and Transportation expects final results and recommendations from its assessment with consultant VHB in June. An interactive map and form to identify transit issues and provide suggestions can be completed here.