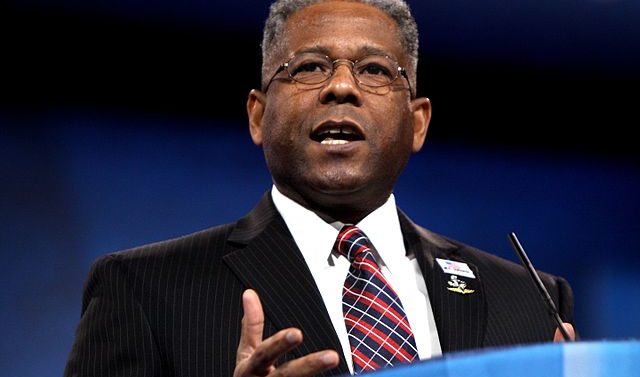 Former Florida congressman, tea party star and retired U.S. Army lieutenant colonel Allen West was at the University of Georgia on Tuesday to talk about “the war on radical Islam,” embracing President Trump’s travel ban from certain Muslim nations while criticizing U.S. foreign policy in the Middle East dating back to the 1970s.

West began by reading 1786 letter written by John Adams and Thomas Jefferson about the Barbary Pirates off North Africa to describe a long, contentious relationship between America and Islam.

This was part of a highly-rehearsed presentation, noted one student who said he has seen West speak before. West was “painting a picture of ‘us versus them’” by tracing the history of an entire religion back to terrorist group, the student said, and criticized him for seeming to lump all Muslims into the “extremist category.”

West disagreed—it’s they who paint this picture, he said. “I’m not making any of this up. We’ve been dealing with this since 1786.”

The solutions to defeating ISIS that West presented were at odds with the Obama Administration’s “past 8 years of foreign policy based on obfuscation, dismissal and denial” but neither did he explicitly endorse the Trump Administration’s military strategy. The current threat of ISIS, and the Obama administration’s refusal to recognize the threat of “Islamic jihadists, Islamic extremists, Islamic fascists or Islamists” is similar to the nation’s position pre-World War II, West said.

“We sat back and saw the atrocities and we continued trying to compromise and appease our enemies… The problem with the USA and western civilization is that we focus on one group here, one group here, and we end up playing an insidious game of Whac-a-Mole,” instead of focusing on this global “civilizational jihad,” he said.

West, like Trump, controversially advocated that the Muslim Brotherhood, a group that favors Islamic governance and renounced violence decades ago, “immediately be named a terrorist organization.” Yet following the Arab Spring in Egypt, it was the Muslim Brotherhood candidate Mohamed Morsi who won the 2012 election, only to be ousted by a military coup in 2013 that installed Abdel Fattah el-Sisi as president. El-Sisi is accused of numerous human rights violations, and on Monday became the first Egyptian president to visit the White House since 2009.

“We don’t need to go out and align ourselves with despots, dictators, theocrats and autocrats,” West said. But contradicting his own disdain for human rights violators, “It’s a good thing we have El Sisi here,” West said.

One student asked “how the U.S. can retain a moral high ground while holding hands with dictators and not embracing the rights of the people? What is the cost of being friends?” Well, the U.S. “hasn’t always picked the right guy,” West said, pointing fingers at President Jimmy Carter’s “terrible decision” to allow the Ayatollah Ruhollah Khomeini to return to Iran instead of backing the shah during the Iranian Revolution. “Did you know the only time a tornado ever hit the governor’s Mansion was when Jimmy Carter was governor?”

To defeat the global threat of ISIS, West echoed Trump’s effort to “deny them sanctuary… We have allowed the enemy to come in and blend in with the populace,” resulting in terror attacks, he said. Despite the total number of fatal terror attacks carried out by refugees in the U.S. standing at a grand total of zero, West said terrorists are making there way in through the refugee system, which the U.S. is allowing them to exploit because of political correctness.

“It is not a right to come into any country, it is a privilege,” he said. “And Guantanamo Bay should stay open.”

But West is far more wary of Russia than Trump, who has repeatedly praised President Vladimir Putin. Earlier this week, Iranian President Hassan Rouhani travelled to Moscow to meet with Putin. “Iran is the No. 1 state sponsor of terrorism, and now they’re sitting and meeting with Russia,” he said. “That’s no different than Hitler sitting down with Benito Mussolini. This is not a joke. We shouldn’t treat it as such.”

While West’s Twitter account is littered with the “Make America Great Again” hashtag, he took a swipe at President Trump—“You can’t do foreign policy on tweets. You must do it with resolve.”—before moving back to Trump’s defense. The investigations into the administration’s connections to Russia are a distraction, he said. “We should pay attention to what Russia’s really doing.”

West also criticized several administrations for their inability to think in long-term strategy, but in terms of election cycles. While the Iranian nuclear deal slows down their building of a nuclear weapon, it doesn’t prevent it altogether, he said. Similarly, in order to fight groups like ISIS, the U.S. has to stop the flow of money and resources toward their operation, he said. It was the nuclear agreement that lifted sanctions on Iran that has allowed deals such as Boeing’s recent deal with Iran to be possible.

“Our greed cannot become so great that we are blind to the consequences,” West said. “We cannot put the noose around our own neck.”

At the end, West said he is unsure he will be running for political office again, but that he will go “wherever God leads him.” However, after a question about supporting women’s rights in the Middle East turned into a criticism of the Women’s March, he finished with “Let me be president, and I’ll fix all of that!”

West’s speech was hosted by Young Americans for Freedom, a libertarian student organization at UGA