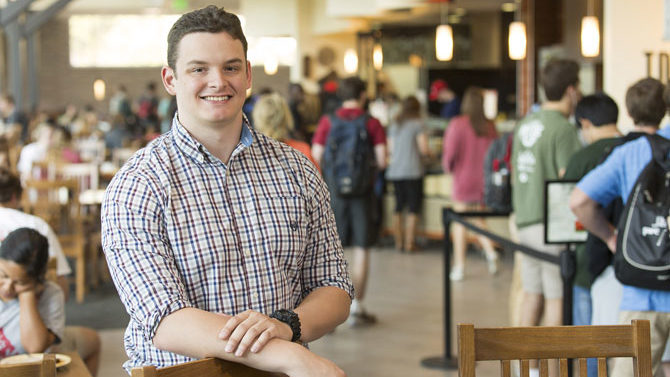 College students have always been cash-strapped, and with tuition and other expenses rising, the problem may be growing more acute. One in five students at UGA is not even getting enough to eat, according to data collected by the university.

Thousands of students are experiencing “food insecurity,” defined by the U.S. Department of Agriculture as a lack of “consistent access to adequate food… limited by a lack of money and other resources at times during the year.” A recent study by Hunger on Campus found that 48 percent of respondents reported experiencing food insecurity in the previous 30 days, including 22 percent with “very low levels of food security that qualify them as hungry.” One in 10 of the 46 million people served by Feeding America, a national network of food banks, is enrolled in college.

The students who are most at risk of experiencing food insecurity are those who have a “gap” between the financial aid they receive and UGA’s total cost of attendance, says Jan Barham, UGA’s associate dean of student affairs.

Over the past decade, college tuition has risen 63 percent—triple the rate of inflation, according to the Consumer Price Index. Textbook prices rose 88 percent, and housing costs increased 51 percent.

One cause of that “gap” is rising college costs. The Bureau of Labor Statistics released data revealing that college tuition alone increased by nearly 260 percent, compared to the nearly 120 percent increase in all consumer items from 1980–2014. In the past 10 years alone, from January 2006 to July 2016, the Consumer Price Index for college tuition and fees increased 63 percent, compared with an increase of 21 percent for all items. At UGA, the cost of attendance is up 26 percent, from $20,820 for an in-state student in 2011–2012 to $26,208 in 2016–2017, according to UGA Office of Student Financial Aid data.

Many UGA students receive scholarships, but not everyone keeps them. Only 22 percent of students receive scholarships covering all of their costs, according to U.S. News and World Report; the rest must pay something out of pocket, whether they can afford it or not. Often parents will foot the bill, “but sometimes parents lose jobs, and some students work two and three jobs to send money home to [their families] to raise their siblings,” Barnham says.The estimated 7,000 students who experience food insecurity at UGA are “some of the best and brightest at UGA. They just have financial restrictions,” Barnham says. “UGA is still one of the best affordable universities. We just have to think of how we can do more.”

To do that, UGA created the Financial Hardship Program, of which the Let the Big Dawg Eat food scholarship is only one small part, says Matthew Waller, assistant to Vice President of Student Affairs Victor Wilson. The LTBDE scholarship comes in the form of a seven-day, full-access meal plan to all of UGA’s dining halls.

The university awarded 46 food scholarships to the 373 students who applied in fall 2016, and another 27 in spring 2017. That is a significant increase since spring 2015, the first semester the scholarship was offered, when 16 students applied and only two meal-plan scholarships were funded. Funding comes solely from private donors, Barnham says, including a $900,000 contribution from UGA alumnus Jess Stokely last year.

“This year, we are offering more than 30 students meal plans, which is pretty significant, but still, when you look at the data we have… a lot of students are still concerned about financial issues,” Waller says. “What are their short-term, unexpected or more longer-term family situations, medical issues, things that really impact students’ ability to be successful on campus? Those are the things we’re trying to be comprehensive [about] in our approach. We aren’t going to solve every financial problem, but we want students to be aware of the resources.”

It wasn’t only the national trend of widespread food insecurity on college campuses that brought UGA’s attention to the problem, it was also students themselves. Barham says her division in the Office of the Dean of Students began hearing more stories about students choosing between buying books or food—also a trend found by Feeding America in 2014—and being unable to attend organization meetings because they were held inside dining halls, which cost at least $9 to enter. “Many students worried about scraping together the money or wouldn’t go to the meetings,” she says.

As a veteran, Kyle McReynolds, a business management major from Warner Robins, discovered the scholarship through the Student Veterans Resource Center, which operates under the Office of the Dean of Students. His biggest challenge before receiving the meal plan last academic year was not accessing food, but “finding a healthy source of food for a relatively low cost,” he says.

Consistent access to healthy, diverse eating options has “made an enormous impact in my everyday life financially,” McReynolds says. “I didn’t have to worry about the additional funds I would need to work for to pay for food. It truly took a large weight off my shoulders.”

With that weight gone, he has been able to re-focus his efforts on his academics. “I saw myself having time for the additional workload and readings, thus performing better on exams,” he says.

Food insecurity also poses a risk to students’ health. “There are significant health problems from eating only a can of corn every day,” Barham says. “We had a student pass out in class and go to the hospital. The doctor had to say, ‘Without a change in diet, you won’t be able to continue being a student.’”

Waller works “with students through the financial hardship piece, who are having some sort of emergent situation,” linking them to resources such as an emergency fund, short-term no-interest loans and on-campus employment. “We’ve gotten some grants to do an emergency fund so students can apply who may have a particular short-term hardshipâ€Š—â€Šif they had a medical issue or something with transportation or need help with booksâ€Š—â€Šthose are our typical things,” she says.

In addition to the food scholarship, a small food pantry in the Tate Center allows students, regardless of proof of need, to pick up several food items a day. Students can also work for campus dining halls and receive a free meal during their shifts. If students qualify for the Supplemental Nutrition Assistance Program (SNAP, also known as food stamps), they can use their benefits at the Athens Farmers Market, where SNAP dollars are doubled.

Until UGA can reach 100 percent of students in need, its work isn’t done, Barham says. “The story isn’t over yet,” he says. “Hunger is still out there, and it’s a reality for many of our students.”