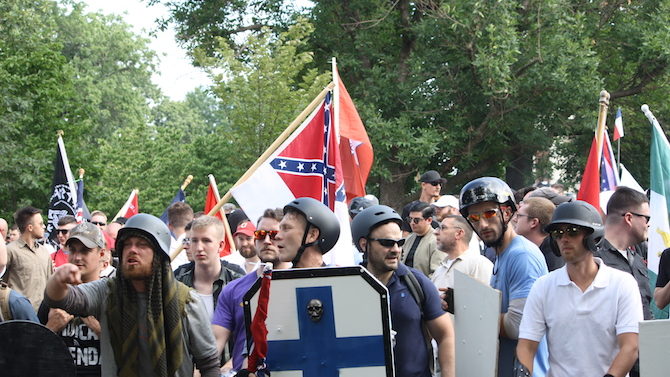 Local progressive groups have scheduled two events—one this evening and one tomorrow—related to the white supremacist riot in Charlottesville, VA last weekend.

A candelight vigil from 5:30–7 p.m. today at the Arch is billed by Athens for Everyone and the Athens Immigrant Rights Coalition as being both in solidary with Charlottesville and a call to action to defend undocumented immigrants and oppose the repeal of the Deferred Action for Childhood Arrivals program.

Wednesday at 6 p.m., the Athens Anti-Discrimination Movement will host a “community conversation” at the Athens-Clarke County Library about Charlottesville—including, specifically, whether Athens’ Confederate memorial on Broad Street should remain standing.

White supremacist anger at Charlottesville removing a statue of Robert E. Lee is what sparked Saturday’s violence. Monday, protesters pulled down a Confederate statue in Durham, NC. In Georgia, Democratic gubernatorial candidate Stacey Abrams has called for Lee, Jefferson Davis and Stonewall Jackson’s images to be erased from Stone Mountain.

State law prohibits any monument on state property (Broad Street is a state highway) from being altered or removed, and specifically protects Stone Mountain “as a tribute to the bravery and heroism of the citizens of this state who suffered and died in their cause.”