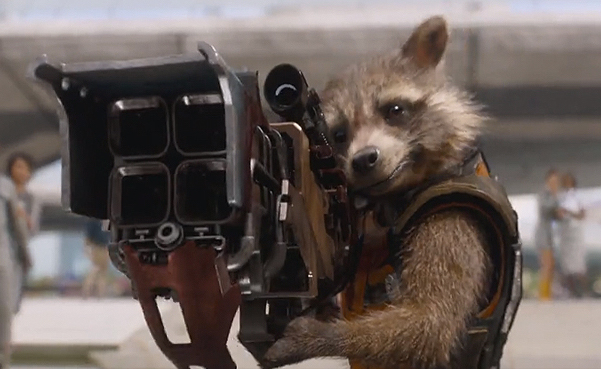 Rocket Raccoon is looking forward to bringing his giant space gun to the University of Georgia if HB 280 passes.

The Georgia Senate passed a slightly tweaked version of HB 280, the “campus carry” bill, this afternoon, setting up negotiations with the state House and Gov. Nathan Deal over the final version of the bill before the legislative session ends at midnight Thursday.

As with the past four efforts to push through campus-carry legislation, the bill would allow concealed-carry permit holders to bring their guns onto college campuses, with the exception of fraternity and sorority houses, dorms and athletic events.

The current version also includes exceptions for daycare facilities and areas where high-school students are participating in activities on campus.

Athens Sen. Frank Ginn (R-Danielsville) voted in favor of the bill. Senate Majority Leader Bill Cowsert (R-Athens) who allowed it through the Senate Judiciary Committee, which he chairs, last week, voted against it.

[Correction: Cowsert is vice chairman of the Judiciary Committee. We’ll update this post when we hear why he voted against HB 280.]

The AJC reports that the bill is likely to go to a conference committee between leaders in the House (where a version already passed) and Senate to hash out any differences, and negotiations have started with Deal’s office on a potential compromise the governor could sign.

Massive organized resistance to the bill in Athens last year may have helped convince Deal to veto it. This year there’s been at least one protest, but local opposition has been more subdued so far. Maybe folks are looking at Arkansas’ new law and saying, “Eh, it could be worse.”