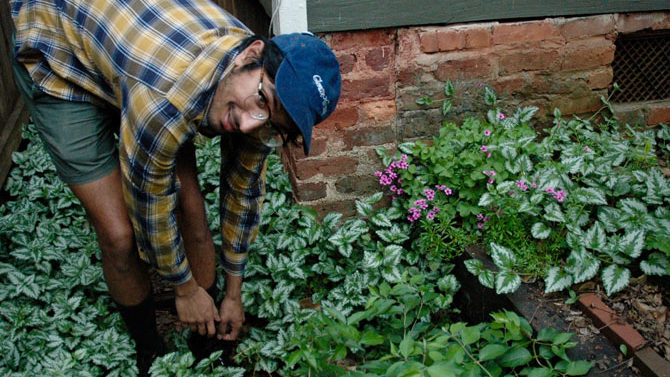 After dropping off the radar following 2014’s brilliant Genesis full-length, local psychedelic hip-hop producer murk daddy flex has returned with a triumphant new EP, Bring on the Major Leagues, which he will perform in its entirety Tuesday, Apr. 4 at the Athens Institute for Contemporary Art. Flagpole caught up with the man behind the murk, Terence Chiyezhan, for an interview.

Flagpole: Why the hiatus? Why the comeback?

Terence Chiyezhan: Last year I toured the East Coast, and have been playing a few shows locally since then that have incorporated multimedia and performance art with the help of the imagination and audiovisual talent of Michael Lauden. Due to the involved production required for these sets, I want to make sure what MDF contributes to each show is special. I don’t want to fall into an overly rehearsed routine, especially because the beats are not performed live. I don’t want to release any tracks unless they sound completely finished to me, and now I feel that the new songs I’ve been working on are ready for public consumption.

FP: What changed in terms of how you approached the new EP? Any difference in production, sampling methods, etc.?

TC: I tried to use a more objective ear with the help of feedback from friends when creating Bring on the Major Leagues. I’ve also been making an effort to use sampled drum breaks less. A lot of the go-to drum breaks I was using in previous releases already had so much groove and character that I didn’t have to alter them a lot to make something I thought sounded cool, and it was becoming a creative crutch.

As far as production techniques, I’ve become a big fan of low-pass filtering, which is removing the treble part from sounds. It’s a simple effect that dullens the crispness of a sound and produces a different timbre that I find appealing. In my new work, I’ve been using delays a lot more than reverb effects, which I’ve found add space and rhythmic interest.

FP: You draw from a lot of spheres, but murk daddy flex is rooted in hip hop. Since the project started, Athens hip hop has experienced a resurgence. Do you feel a particular kinship with that part of the scene?

TC: I do. It’s exciting to see people hyped on hip hop in Athens and hearing what’s coming out these days. That being said, I do feel slightly removed, since I’m not actively playing out a lot.

FP: You’ve contributed beats to projects by Lingua Franca and other local MCs. Do you enjoy that sort of collaborative/production work, or do you prefer that your music stands on its own?

TC: I love working with others; however, it rarely pans out as a collaborative effort. I sampled Anna Staddon, from my other project Saline, in Bring on the Major Leagues, and generally when I combine unlikely samples and vocal melodies with old beats it brings interesting, fresh elements to them that make them feel finished.

Artists like Mariah of Lingua Franca and Ricky Digits occasionally ask if they can rap over my beats, and I love hearing how they end up using them, so despite wanting my beats to be able to stand on their own as instrumentals, I don’t necessarily intend them to remain that way. I think I would enjoy having a more close collaborative relationship between hip-hop artists or other musicians who would like to record their stylings over my beats, so I invite anyone who would like to work together to reach out!

FP: What other plans/projects are in the works?

TC: I’m working on wrapping up an album of remixes, and I’m nearly finished with another full album of original beats, but it needs to be mixed first. After that I’ll probably go back into hiding for a while.