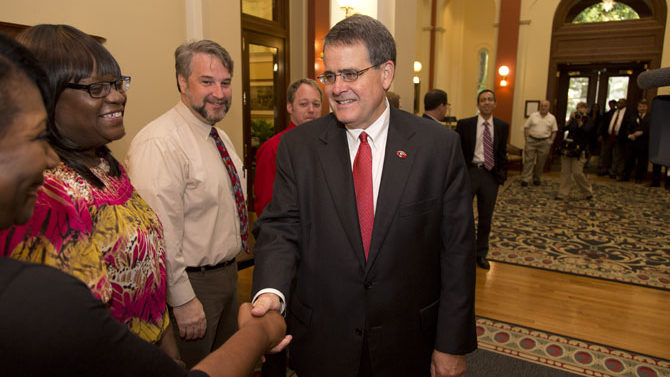 University of Georgia President Jere Morehead defended UGA’s actions on the discovery and reinterment of slave remains underneath Baldwin Hall in a letter to Flagpole today.

Morehead was responding to a letter delivered by local activists to his office on Wednesday demanding that the university acknowledge and address the legacy of slavery on campus.

Morehead began the letter by stating he was “not surprised by the wildly inaccurate claims” in the open letter signed by local activist groups and public officials.

“As President of this institution, I know the University has done what is right and has treated the remains of the individuals at Baldwin Hall with dignity and respect. I am troubled that many dedicated individuals—who represent a broad diversity of perspectives and backgrounds—have been maligned and personally attacked for doing their jobs in a responsible manner,” Morehead wrote.

Morehead defended the university’s decisions by stating that all steps in the process were based on the guidance of the State Archeological Office. He noted the university also hired an external archeologist and sponsored faculty research to study the individuals whose remains were discovered during construction.

In March 2017, the university held a memorial service for the community at Oconee Hill Cemetery and commemorated the gravesite with a granite marker. Morehead said the institution also provided funding to ensure maintenance. In November 2018, the university dedicated a new monument in front of Baldwin Hall that reads,“The University of Georgia recognizes the contributions of these and other enslaved individuals and honors their legacy.”

While I am disappointed, I am not surprised by the wildly inaccurate claims made in the letter submitted to my office yesterday by a small group of local activists. The University of Georgia handled the Baldwin Hall matter appropriately, and our response actually went far beyond what is required by the law.  However, it is clear that a few individuals, obviously driven by a personal agenda, continue to try to leverage this issue and expand it to promote their own causes.

Let me restate for the record that once the first remains were discovered on the construction site in November 2015, we immediately contacted the appropriate authorities. We followed the guidance of the State Archaeologist’s Office in every step of the process, including selection of Oconee Hill Cemetery as the site for reinternment. We hired an external archaeological consultant to perform the work in an appropriate manner, and we also sponsored faculty research to learn more about the individuals whose remains were discovered.

We held a respectful memorial service for the community in March 2017, during which a prominent federal judge and local minister provided heartfelt remarks of remembrance. We commemorated the gravesite with a granite marker and provided funding to ensure its perpetual maintenance.

In 2018, I commissioned a broad-based task force of community and campus leaders, led by Dr. Michelle Cook, UGA’s Vice Provost for Diversity and Inclusion and Strategic University Initiatives, to develop a memorial to further honor the individuals whose remains were discovered on the Baldwin Hall site. The 18 members of this task force carefully considered all aspects of the tribute. In November, we dedicated this beautiful new monument in front of Baldwin Hall with a granite marker which reads in part: “The University of Georgia recognizes the contributions of these and other enslaved individuals and honors their legacy.” Since its dedication, the memorial has served on numerous occasions as a gathering place for reflection and remembrance.

As President of this institution, I know the University has done what is right and has treated the remains of the individuals at Baldwin Hall with dignity and respect. I am troubled that many dedicated individuals—who represent a broad diversity of perspectives and backgrounds—have been maligned and personally attacked for doing their jobs in a responsible manner.

Despite what some might claim, our faculty are free to pursue research of their choosing and to seek external grants for support. The libelous claim in the letter that I would ever have said, “The University does enough for Black students,” is equally preposterous. I care deeply about the University of Georgia, our faculty, staff and students, and I remain committed to fostering a diverse and inclusive environment for every member of our community.

We are in the midst of a fundraising campaign to benefit the institution, and we are actively raising funds for scholarships that meet legal requirements. While we are not permitted to provide race-based undergraduate scholarships, we have created 400 need-based Georgia Commitment Scholarships over the last two years. These scholarships are transforming lives across the state by enabling students with significant financial need the opportunity to attend the University.

Going forward—with the support of our governing board, the University System of Georgia Board of Regents—I will remain focused on advancing the mission of this institution as I have done tirelessly for the last six years.