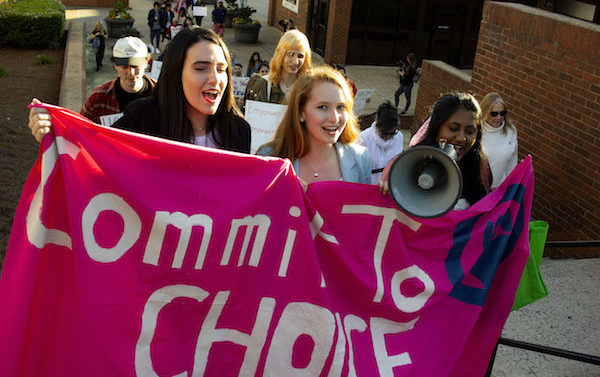 The Georgia House of Representatives could vote soon on what will be one of the strictest—if not the strictest—abortion laws in the country today.

Both Athens-area senators, Bill Cowsert (R-Athens) and Frank Ginn (R-Danielsville) voted in favor of the bill. Two Athens representatives, Republicans Houston Gaines and Marcus Wiedower, have stated they will vote to approve the bill as they did the first time around. Democrat Spencer Frye is the only Athens legislator expected to vote against it.

Senate tweaks to the bill mean the House must approve it again to send it on to Gov. Brian Kemp for his signature, but time is running out. Before Day 38 of the 40-day session, HB 481’s sponsor, Rep. Ed Setzler (R-Acworth), said the bill is three votes shy of passage.

Gaines and Weidower emailed a joint statement to Flagpole about their stance on HB 481 on Wednesday night:

“We are pro-life and ran as a pro-life candidates. Governor Kemp has made this issue a top priority, and we agree with him that we must promote the sanctity of human life. We have received hundreds of messages from constituents who have varying opinions from all sides of the political spectrum, and we respect the viewpoints of all of the people in our districts.”

A video of Gaines defending his stance on the bill has made the rounds on social media. The video shows a woman asking,“Do you personally think that six weeks is enough for a woman to even know that she’s pregnant?” Gaines responded, “Well, I mean, I’m not a woman.”

Men make up nearly 75 percent of the state’s General Assembly this legislative session.

“The fact that our representatives think they are better equipped to make the decision whether to or to not [terminate a pregnancy] is insulting,” said Caitlyn Gegen, an international affairs student and one of the organizers of the Commit to Choice protest, along with Anu Cheemarla and Rachel Smith.

On Wednesday, roughly 100 students and community members—both women and men—gathered for the protest at the University of Georgia Tate Center Plaza, demanding their legislators listen to their concerns over the bill.

Former state Reps. Deborah Gonzalez and Jonathan Wallace, both Democrats, spoke out against the bill at the rally.

“This is more than just about abortions. This is about keeping women oppressed,” Gonzalez said.

Currently, Georgia has the highest rate of maternal mortality rate in the country. More than half of Georgia’s 159 counties do not have a single obstetrician.

Gegen said representatives are instead turning their attention away from the state’s maternal healthcare crisis and putting their effort into overturning Roe v. Wade, the landmark decision issued in 1973 that decriminalized and permitted access to abortions. The GOP push to overturn the ruling comes after Justice Brett Kavanaugh’s appointment to the Supreme Court shifted its political makeup to the right.

The possibility of HB 481 pushing the state into a costly lawsuit is high. Groups such as the American Civil Liberty Union have already stated they will sue the state if the bill is signed into law.

“[HB 481] is an experiment of state’s rights, but we are not your guinea pigs. Our bodies are not your science fair projects,” Gegen told the crowd of protestors.

The Heartbeat Bill will have a major impact on college-age students. In 2015, the Center of Disease Control released a report stating roughly 40 percent of all abortions are sought by women between the ages of 15–24.

“In today’s political climate, it’s so easy to become apathetic just because the sheer amount of things going on. It’s easy to become desensitized and stop considering how you can impact politics,” Gegen told Flagpole. “So, I hope this protest shows people that their voices matter. That their representatives ought to listen to them. That they play a role in democracy.”

The protest ended with organizers encouraging protestors to contact their representatives.