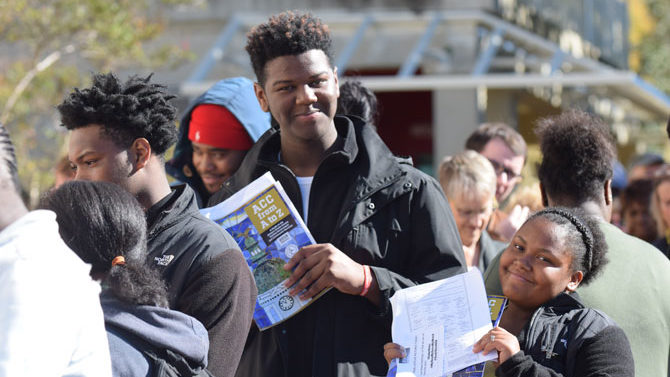 A group of 53 seniors from Cedar Shoals High School cast their ballots for the very first time while on a field trip to Athens City Hall and the Athens-Clarke County Board of Elections Oct. 24.

Jesse Evans, a civics teacher at Cedar Shoals and a member of the Board of Elections, organized the field trip so students could learn about the the importance of voting and getting involved in politics.

“I grew up in a home where politics, government, civic engagement were not even a thing,” Evans said. “A lot of my students have grown up in homes that are very apolitical, like mine was. If you don’t get it from home or from public education, then you’re less likely to have that civic engagement, that passion, the drive to be involved in the community, politics, student government and activism.”

Students first visited City Hall, where they had the chance to sit in the commission chamber and review sample ballots. Evans gave a brief description of each gubernatorial candidate and allowed students to have time to research candidates and amendments on the ballot.

Students also heard from Commissioner Mariah Parker and Commissioner-elect Tim Denson about why they decided to get involved in politics.

Parker spoke about how she originally jumped into politics during the 2008 presidential election, when Barack Obama was running. “I wasn’t old enough to vote back then, but I was really fired up and wanted to get involved somehow. I knew I couldn’t vote, but I knew I could get others to,” Parker said. She emphasized the power of canvassing and civic involvement opportunities.

Denson spoke about starting Athens for Everyone, running for mayor of Athens in 2014, and later running for—and winning—the Commission District 5 seat.

Robert Hiss, the assistant county manager, later spoke about the history of Athens-Clarke County, city-county unification in 1990, the structure of the county government and why local politics is relevant to students. But in particular, Hiss blew the students away with the fact that before the city was named Athens, it was called Cedar Shoals.

After visiting City Hall, the students walked next door to the Board of Elections, where they cast their ballots. Roughly 15 students needed photo identification and received voter ID cards.

But not everything ran as smoothly as planned. Evans said the voter registration status of more than 10 students was flagged as pending by Secretary of State Brian Kemp’s office. One student was initially turned away because of a discrepancy between information on the student’s voter registration form and other documents, thanks to Georgia’s controversial “exact match” policy, but Evans resolved the issue, and the student was able to vote.

Evans said he hopes to continue organizing this event and others like it. “This should be normal. This should not be unusual,” he said.“We need to make this a bigger priority. Not just in Athens, but nationwide.”

In the future, Evans hopes to take Cedar Shoals students to visit the courthouse, witness a trial and possibly even meet with local judges.

Evans said his mission is to take students to “the spaces where most people in our community aren’t going and getting them involved with government. Expanding the realm of probability for their involvement, career paths and trajectory in life.”

Here’s a video by Radwan Jammoul of WJAG-TV and Blueprint Magazine: