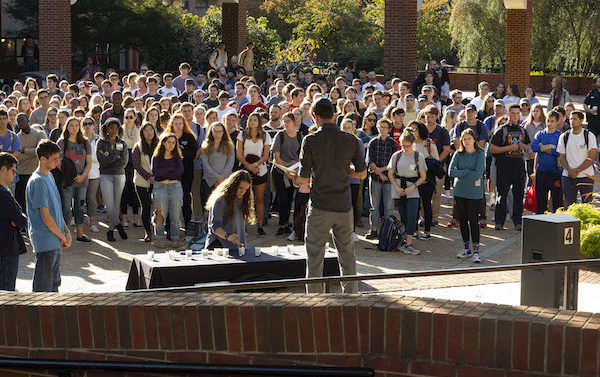 University of Georgia students and other Athens members gathered outside UGA’s Tate Student Center Tuesday afternoon to mourn the victims of the shooting at a Pittsburgh synagogue.

Eleven were left dead and six injured after the mass shooting at the Tree of Life synagogue on Saturday. The shooting is believed to be the deadliest attack on the Jewish community in the history of the US, according to the Anti-Defamation League.

Robert Gregory Bowers, 46, is charged with the shootings. Bowers has a history of neo-Nazi and anti-Semitic postings on social media.

The crowd stood silent at the beginning of the event as candles were lit while the names of the victims were read off: Joyce Fienberg, Rich Gottfried, Rose Mallinger, Jerry Rabinowitz, Cecil Rosenthal, David Rosenthal, Bernice Simon, Sylvan Simon, Daniel Stein, Melvin Wax and Irving Younger.

Speakers at the event highlighted the personal nature of these attacks, saying that the shooting was an attack not only on Jewish Americans, but all Americans.

The vigil was organized by UGA Hillel, Chabad and other community partners.