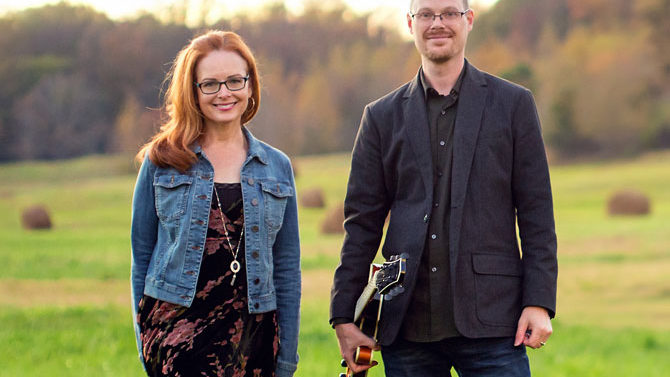 “There’s a common theme in meditation,” says Trey Wright, “that as you’re focusing on your breath, if you get distracted, begin again. I love that idea—that whatever happens, it’s OK. Just begin again.”

Celebrating the release of a new album, Begin Again, at Hendershot’s on Thursday, the Atlanta-based jazz guitarist and Kennesaw State University instructor is undergoing a process of exactly that, with his first album since Songs From Oak Avenue in 2015. He’s forging new artistic paths after a depressive episode that nearly ended his musical career and landed him in an outpatient mental health program. And he’s unafraid to speak about it.

Begin Again is a band effort, co-produced with drummer Marlon Patton, but in Athens Wright is set to perform in a duo with the album’s featured vocalist, Laura Coyle.

“I think I needed something radically different from what I was doing before,” says Wright of the duo project, which formed in 2017. “Laura was looking for a new way to approach what she was doing, as well. So, it just sort of grew. It’s been a game-changer for me. It’s one of the main reasons I’ve been able to find my way back into music.”

“Playing with Trey inspires me to imagine my voice fully as an instrument,” offers Coyle. “We always have new arrangements emerging and ideas we’re passing back and forth. In concert, we’ve developed the kind of telepathy that allows us to go in any direction, and it can really bring us closer to the audience.”

“We do anything from standards to Brazilian music,” Wright adds, “to some original solo guitar, blues, gospel or songs by our favorite songwriters, like Joni Mitchell, Paul Simon, Dolly Parton. I thought it would be interesting to approach a jazz show like you would approach a singer-songwriter show.”

For the gig, Wright has also enlisted fellow guitarist Dan Nettles, the leader of Athens’ own beyond-genre jazz unit Kenosha Kid, who will bring his own conceptual flavor to the Begin Again material. The partnership is poignant. Among the many things Wright and Nettles share in common is the devastation of losing their dear friend Carl Lindberg in 2015. Lindberg was a multitalented bassist and pillar of the Athens scene who, with Wright, co-founded the group Squat—a venture that lasted some 20 years and landed opening slots for Derek Trucks and Col. Bruce Hampton, among others.

“When you’re in a band with somebody, it’s like a family, with all the warts, all that stuff,” Wright says.

The loss of Lindberg contributed to Wright’s depression, and Nettles became a key confidant. On the new Kenosha Kid release, Missing Pieces, Nettles deals head-on with his own grief and turmoil, and the difficult but ultimately rewarding process of music-making occasioned by that dark period. “I thought it would be great to have Dan on this gig, not least because of all that,” Wright says.

On Begin Again, Wright does Lindberg the posthumous honor of covering “Looking at Each Other,” with Squat members Tommy Sommerville, Kevin Hyde and Darren Stanley reunited for the purpose. It’s a hovering, quasi-mystical bossa nova, sung by Coyle in Lindberg’s absence, with lyrics inspired by a Li Bai poem, stemming from Lindberg’s time spent in China as a tai chi disciple.

“In a way, the CD documents a lot of the projects I’ve been involved with,” Wright says. “Marlon was in Squat at various points. Sam Skelton is technically my boss at Kennesaw State, so that relationship is on there. I used to have a trio and quartet with Mace, so that’s on there, as well. It was fun to combine all these different worlds, and it made it more meaningful.”

Among the album’s three vocal features, Coyle is self-assured and magnetic on Mitchell’s “The Hissing of Summer Lawns,” with the tempo bumped up a bit and the jazz elements made more explicit. It’s one of several Mitchell numbers likely to be heard at Hendershot’s.

The title track is an outlier of sorts, a lilting steel-string acoustic invention with shifting meters that “started as a solo guitar piece, but never really felt complete until now,” Wright says. “I thought it would be fun to do with bass and drums. There are multiple guitars reinforcing the melody line, and by the end, there are a couple of mandolins on it, as well.”

Nearly two minutes in, there’s also a sustained and unusual pause—not something Wright expected to keep in the final mix. But Patton, as co-producer, opted to leave the entire pause intact. When the beat begins again, everything feels in place.