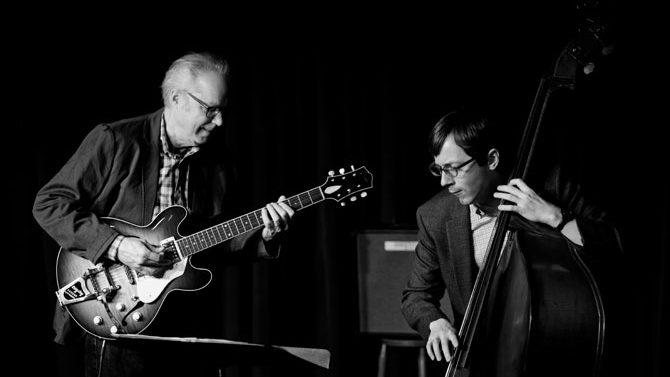 Sixty-seven-year-old Bill Frisell, one of the world’s most influential guitarists, recorded his live album Small Town in 2016 at the world’s most famous jazz club, the Village Vanguard in New York. When Frisell arrives to play Hendershot’s in a trio with bassist Thomas Morgan—his duo partner from Small Town—and drummer Rudy Royston, he’ll be in an actual small town, though one with a vaunted and outsize musical history. There’s little doubt his music will fall on receptive Athenian ears. “I played at Nuçi’s Space a few times and one other place, but it’s been quite a while,” the guitarist recalls.

Reached in Minneapolis during a tour with Charles Lloyd last month, Frisell had a lot to look forward to, including the release of his extraordinary solo-guitar album Music IS, released Mar. 16. “We’re going into the Vanguard again with Thomas and Rudy, and I’ll be playing in there for two weeks,” he says, “so by the time we get to Athens, there’s no telling what’s gonna be happening. But we’ll be warmed up, anyway.”

On Small Town, Frisell dives into an expansive musical sea, whether he’s swinging Lee Konitz’s post-bebop classic “Subconscious-Lee” or charting unexpected paths through the Carter Family staple “Wildwood Flower” and the Fats Domino hit “What a Party”—or, for that matter, the haunting, harmonically rich theme from Goldfinger. His originals mirror this eclecticism, as well. “We recorded two nights at the Vanguard,” he says, “so Small Town is just a snippet of that. There’ll be another volume coming out, I think next year.”

In the duo with Morgan, the instruments sing and tempos sway as the two masters listen intently and react. “In the early ’70s, I’d go see Jim Hall play duo with Ron Carter,” Frisell remembers, “so that’s like a blueprint for me—the ultimate guitar-bass thing.”

Adding Royston boosts the intensity, but it’s not so simple. “We’re all still using the same instincts; there’s just more going on,” Frisell says. “There’s this combination of sensitivity and incredible power at the same time. Rudy has never looked at one piece of paper playing with us. It’s unbelievable. I remember the very first time he played in my group, no rehearsal, we were playing ‘A Change Is Gonna Come,’ and I looked over and he was singing the words. It’s just so deep, his understanding of what’s going on.”

There’s a deep vein of Americana, old-time, folk and country influences in Frisell’s work, even as his jazz improviser’s sensibility colors every moment. “My mother’s side of the family has roots in West Virginia,” he says, “and when I first started traveling down there, the feeling I got hearing that sound, it was something. I grew up in Denver, and I guess you could say the wide-open spaces out West, cowboys and all that—maybe those images come to mind. But the reality is, I was growing up in a city. It was the ’50s, and it was like ‘Leave It to Beaver’ or ‘Father Knows Best.’ The pop music on the radio was so mixed up—to me, it was all just music that I liked.”

Morgan is 30 years Frisell’s junior and looks younger, but his authoritative sound and penetrating musical intelligence have landed him major sideman gigs with Craig Taborn, Jim Black, Tomasz Stanko, Samuel Blaser and a host of others. He appeared with Frisell on Paul Motian’s Windmills of Your Mind in 2011, the revered drummer-composer’s final session. With Royston and violist Eyvind Kang, he played on Frisell’s When You Wish Upon a Star in 2016. He also joined Frisell in Denver to record cornetist Ron Miles’ highly acclaimed I Am a Man the next year.

Speaking about “Wildwood Flower” and other rootsy material he’s discovered through Frisell, the bassist says, “Those tunes, they have interesting shapes. The phrases aren’t all symmetrical, and they come from the melody. It does make it interesting to improvise with.”

Eliciting fresh perspectives from himself and his bandmates is one of Frisell’s most enduring artistic strengths. Never stuck in one sonic space, he might pluck odd, celestial Telecaster chords or wail with maximum fuzz-tone (and stranger effects), or he might simply take your breath away unaccompanied on a 1940s Gibson J-45 acoustic, as on “The Pioneers” from Music IS. “The music is always in flux,” he explains. “It’s always moving.”