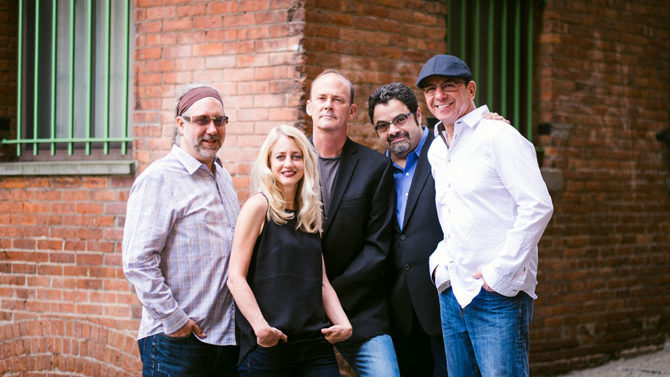 A week prior to a gig at New York’s illustrious Birdland, alto saxophonist David Bixler and his group Auction Project will appear in Athens Jan. 12, before heading to Savannah the next night. Known for their adventurous hybrid of jazz, Celtic and Afro-Cuban music, the quintet features Bixler alongside acclaimed pianist and four-time Grammy winner Arturo O’Farrill. O’Farrill is one of today’s leading bandleader-composers—a champion of musical hybridity and open cultural exchange.

Auction Project is “neither trendy nor conservative, neither fringe nor centrist,” says O’Farrill. “It’s unique and handcrafted, unlike any other project I’m involved with, and a privilege to be a part of. It’s a specialized group of people that can handle any musical demand that David’s crazy, brilliant mind is capable of putting in front of us.”

These appearances also mark a return to form for Bixler after he was partially sidelined by a family crisis. He and his wife, Auction Project violinist Heather Martin Bixler, spent several years laser-focused on the struggles of their son—the youngest of four children—who suffered a traumatic brain injury in infancy and began showing delayed complications at age 7.

“A lot of things needed to happen for us as a family—things that were vastly more important [than music],” Bixler says.

After a difficult period involving two surgeries, their son is stable and improving, attending high school at age 15. And Bixler is undergoing a renewed creative burst—not just with Auction Project, but also a brilliant new quartet; The Bixtet, a nine-piece with strings inspired by the poetry of Langston Hughes; and a podcast of musician-to-musician interviews, “Liner Notes.”

“Like jazz, Irish music is an oral tradition, and that’s how it’s passed on,” he says. “It’s really about ownership of the tune, about how you’re going to ornament the tune. The people who are masters have found many different ways to approach the material. A lot of it is in 6/8, as well, so that makes it a cool hookup with some of the Latin grooves.”

It was his wife’s growing immersion in Celtic music, and hearing it daily at home, that led Bixler to explore further and bring Auction Project into being.

“Heather is a Juilliard-trained concert violinist who fell in love with Irish fiddling and became a master at it,” says O’Farrill, noting his own Irish ancestry via his late father, the legendary Afro-Cuban jazz pioneer Chico O’Farrill. “It resonated with me, because my father and his people far back are from the county of Longford. There’s a lot of Irish in the O’Farrills still.”

For Bixler, who years ago had his own transformative experience playing in Chico’s Afro-Cuban Jazz Orchestra, it seemed imperative to recruit Arturo for his group.

A first official gig, for a public-school auction and benefit, gave the band its name; an eponymous debut for the Zoho label followed in 2010. Slink, a 2013 follow-up, featured two cameos by fusion guitar great Mike Stern, but ended up being the last Bixler effort before the hiatus. At Hendershot’s, the newly revived band will draw on these two releases, but also kick around new music for a third album still in the planning.

In the way they inhabit spaces between genres, Auction Project seems to further the legacy of Chico O’Farrill himself, whose artistry Arturo discusses with Bixler in an episode of “Liner Notes” from September 2018. Chico, the son muses, “was a knucklehead, because he would insist on writing 12-tone-row mambos.” He melded European musical conventions with Afro-folkloric forms and cutting-edge American jazz.

“Ethnically, geographically, artistically, culturally and aesthetically, he sat at the midst of many worlds,” O’Farrill concludes, adding, “One of the most heroic things you can do in life is not define yourself on a point… this nationality, that music, this instrument, that style.”

One could argue there’s a lot of Athens in that worldview—something for local folks to show up for and welcome with open arms.