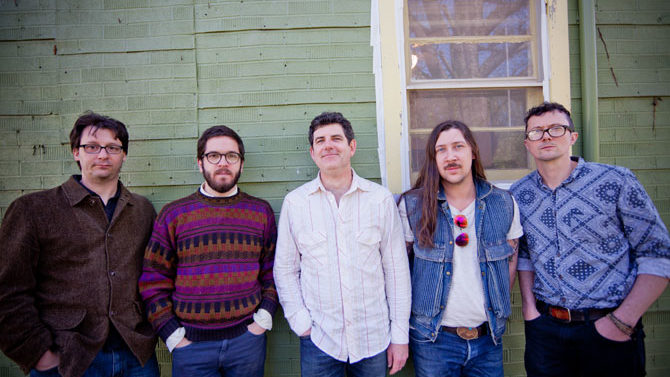 Much like the Thomas Pynchon reference that gave the band its name, Kenosha Kid is all about indeterminate form and meaning. Led by guitarist and Athens stalwart Dan Nettles, the group could have a rock-inspired power trio at the core and a jazz horn section on top. Or it could be the trio alone. Or it could be a quartet with second guitar. On the band’s new album, Outside Choices—the companion to 2015’s Inside Voices—we hear the incarnation with horns.

For the album release gig at Hendershot’s on Sept. 1, it’ll be the quartet with guitarist Rick Lollar, bassist Robby Handley and drummer Marlon Patton. “I’m not really quite sure what we’re gonna do,” Nettles says with a shrug. “But it’s gonna be awesome.”

As for how to categorize Kenosha Kid’s music, that’s also indeterminate. “If you love jazz, you’ll like it. If you hate jazz, you might like it,” Nettles quips. The harmonic richness and rhythmic involvement come from jazz, but the sonic particulars—electric bass, grooving drums, guitar amped in stereo with pedal effects—come from a number of places. Nettles might cite Black Sabbath, Johnny Cash, Sonny Sharrock and Elvin Jones as influences—perhaps on a single tune.

“The worst type of music for me is boring music,” Nettles says. “So, I guess if you’re sick of boring music, then this is for you.”

What Kenosha Kid lacks, as Nettles puts it, is a musical home, which can be liberating but also a career challenge. “We’ll play jam band gigs and then jazz club gigs, and both work out pretty well,” he says, “but getting either camp to write about it or program it without knowing us ahead of time is tricky.”

As for a physical home, Athens certainly suits a band this versatile and plays a role in nurturing it. Moreover, in the absence of a consistent local jazz community, Kenosha Kid has willed its own scene into being. The group is tenaciously local, but its music clears the very high bar established by jazz players in New York and elsewhere.

That explains the presence of three top-tier horn players on Inside Voices and Outside Choices. They hail from far afield: Trumpeter Jacob Wick is based in Mexico City, alto saxophonist Peter Van Huffel in Berlin, and tenor and baritone saxophonist Greg Sinibaldi in Seattle. They descended on Athens in 2014 to record both albums in one week, gigging every night at Hendershot’s former location as they went.

“It was kind of grueling, in a good way,” recalls Sinibaldi. “At the end of the last gig, it felt like we’d been together a month. You get to know each other pretty well.” Seeking that type of immersion again, Nettles is preparing to spend November of this year with Van Huffel in Berlin. He’s also set on luring the horns back to Athens: “It’ll happen, sooner or later.”

Nettles has earned their devotion. “Dan is a pretty major deal to me,” Wick says. “One thing that makes sense to me about Kenosha Kid [is that] it’s a family band. Dan leads rehearsals, plans tours and runs concerts in a way that encourages trust and camaraderie. Which, in turn, lends a flexibility to his music that only can happen when people trust each other. That’s been a lingering influence on me, where playing the music ‘right’ is about more than nailing a thorny rhythm or achieving some acrobatic line, but rather allowing for that unexpected moment where something truly special happens.”

Harnessing those moments became important enough to Nettles that he began posting Kenosha Kid’s live shows on Bandcamp. There were creative sparks in these uploads—“very unique events,” Nettles calls them—that typically prove elusive in the studio. Several good-quality YouTube clips supplement the band’s live public archive and show it at its most vital and risk-taking. There, you’ll notice Jason Huffer’s accompanying video projections, though Nettles has also gone with the tried-and-true mirror ball and fog machine on occasion.

In advance of Friday’s show, Nettles offers a preview of his live rig at his home in Normaltown. He steps on a loop pedal and triggers a saved pattern, a rich, resonant swirl of sounds that starts coursing through two old tube amps and fills the space. Later, he calls up new unmixed tracks that he recorded in Atlanta earlier this year with the two-guitar lineup, a batch of repertoire that won’t see release for some time but will be heard at Hendershot’s.

The digital information scrolls by on a very large wall-mounted monitor, as the layered cyclical rhythms and sonically ambiguous haze of the new music reveals itself. It’s melodic and structured but also open-ended, with the improvised element always ready to burst forth. On a wood table near the kitchen is a setlist—not just song titles, but also the forms of most of the songs mapped out in some fashion.

“I’ve been doing that on the new stuff, because we’ve changed things a lot,” Nettles explains. “I have to write the form to indicate what we’re expanding. It comes down to choices you’ll make when you’re performing: Am I going to push here or not? The shows have been a lot more sensitive to overall form and duration, too. There’s a flow, an idea for the whole thing, and moments in between where there’s question marks: ‘Grow something here.’”