Triumph of The Arcs 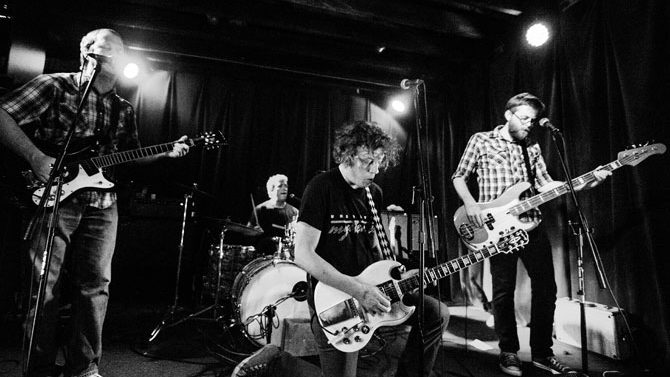 From the outside, it might seem like Molt, the first full-length from The Arcs, was troubled from the start. Thankfully for fans of Athens’ finest purveyors of power-pop, they’ll have plenty of reasons to celebrate the release of their new record when they play with Shehehe and Golden Eels this weekend at the Caledonia Lounge.

The band’s most recent challenge came when it received an unexpected message from the management and legal team of Black Keys guitarist Dan Auerbach. It seemed the Nashville-based rock star had decided to name his new project The Arcs.

Given that the Athens iteration of The Arcs—which features Kevin Lane on guitar and vocals, Brandon Reynolds on bass, Ben Spraker on guitar and Dave Gerow on drums—had existed since 2008, that communication certainly wasn’t expected. “Blindsided is an underestimation of it. It was a total surprise. It came out of nowhere,” Gerow says.

Lucky for those in the Athens contingent, negotiations between the two bands were as painless as possible. Both groups agreed to share the name and coexist, despite the inevitable search engine confusion.

“We are amicably existing. All legal matters are totally settled and nonexistent,” says Gerow. “It’s an interesting situation, but we’re not trying to operate under the radar. We were able to come to an agreement that everyone was satisfied with,” he says, adding, “They were extremely cool and very intent on not being the big rock-star jackasses who were trying to bully around the little guy.”

Although settling any potential legal matters with Auerbach was a relief, the band was more relieved to complete work on its latest record, which itself was no easy task. While even a band bankrolled by a major label might find itself struggling to complete a record due to financial concerns, everyday life was enough to make Molt a difficult production.

“It was a long process, because we had our computers dying and we didn’t have a stable space to have a studio setup,” says Gerow of the length between the album’s conception and release. In addition to coordinating the schedules of band members and their day jobs, Lane’s studio was primarily a mobile operation—the aptly named Express Lane Mobile Unit—which made recording especially difficult.

Given Lane’s history of engineering and performing in acts like The Possibilities, production duties naturally fell on his shoulders.

“We bought a computer as a group,” says Gerow. “But even though we had a lot of freedom with the recording process, we were having trouble finding a place to keep it set up and constant. So it was in a few different apartments, and then we found that it was hard to record in an apartment.”

The band had a stroke of good luck when Lane and his family moved into a house that was nearly perfect for turning into a recording studio. It gave The Arcs the opportunity to get to work and complete their record. “All of a sudden, we had access to a regular, stable studio,” says Gerow.

Molt features 10 tracks of solid power-pop sure to sate fans of bands like Big Star and The Posies. Songs like “Opening Band” feature enough rock crunch to offset The Arcs’ major-key melodies and quippy lyricism. “Nothing You Do” is the most bittersweet tune the band has put to tape, Teenage Fanclub on downers.

Despite the recording sessions being arduous and somewhat inconvenient, the band welcomes the opportunity to celebrate Molt’s official release. “Anytime a band can have a physical release that they can hold, that’s a victory in and of itself,” says Gerow.

Given the long road to release that they’ve had to endure, The Arcs are excited to generate some buzz while avoiding a high-profile lawsuit over their name. “We’ve got a fair amount of friends and have been lucky to play in some OK bands over the years,” says Gerow. “Of course, there could be three crickets and some tumbleweeds when we show up to play, but we’ll just have to see.”