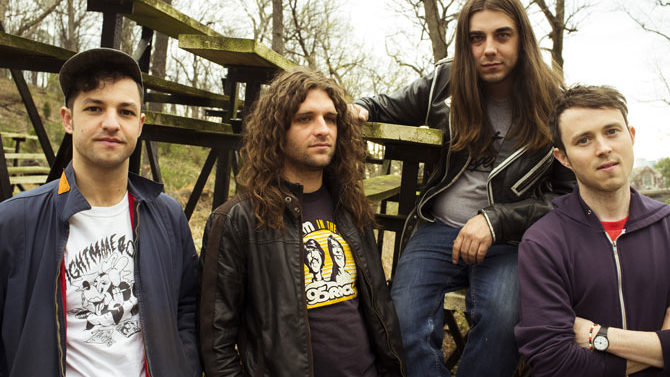 There are plenty of progressive, thoughtful bands from the South, but few have the fury of Lee Bains III & the Glory Fires. Following in the tradition of the Drive-By Truckers, who mused about the “duality of the Southern thing,” for the Glory Fires’ 2014 release, Dereconstructed, the band brought hellfire and guitars along with meditations on the Civil Rights Movement and how the South is implicated in American history, warts and all.

In anticipation of their follow-up of Dereconstructed (due later this year on Don Giovanni Records), Bains and company bring their ethically infused rock and roll fireworks to the Caledonia Lounge on Thursday, where they’ll be joined by Athens mainstays Five Eight and T. Hardy Morris.

Flagpole: How are you doing, despite the unfortunate circumstances of Trump being inaugurated?

FP: Dereconstructed managed to look back and reflect on the Civil Rights Movement, but also maintain a prescience that is so rare in popular music. Does the new material also take on the past in a way that informs the present?

LB: I think that, in this socio-political moment more than ever, memory is a crucial form of resistance. In the age of global capitalism, slashed education funding, the proliferation of media and rising fascism, deep and wide cultural memory runs counter to the systems that work to exploit and subjugate people. It’s hard to turn a blind eye to police killings of unarmed black folks when you’ve been immersed in the memory of lynchings as a means of enforcing segregation. It’s hard to shrug off the prison-industrial complex when you’ve been taught the way that racist laws against vagrancy and loitering worked with convict labor to keep slavery alive in the post-War South. It’s hard to shrug off Trump’s appeals to white-supremacism, xenophobia, cis-heterosexism, with a memory of Jim Crow, Japanese internment, Stonewall.

So, through exploring the particular, I aim to position my peculiar place and time in its broader place and time. My work is constantly challenged and inspired by artists and thinkers who do a much better job of that than I do. Faulkner said “The past isn’t dead. It’s not even past,” and Angela Davis warns about the dangers of selective, whitewashed memory. In an essay I was reading lately, she talked about her problem with the deification of MLK. She explained, of course, that he was worthy of great respect, admiration and remembering, but criticized the way in which he has been remembered in a way that erases what she saw and learned growing up in Birmingham in the ’60s: the multitudes of ordinary people who fought and fight white-supremacy; the centuries of movements that ensconced his work; the women and LGBTQ folks who struggled.

In a sense, remembering Martin Luther King in such a way allows us to believe, “That one man solved that one problem. There, easy enough! Let’s move right along!” Without striving for the fulness of memory, portrayals of a historic figure who fought white supremacy and American exceptionalism at every turn can actually feed into contemporary white supremacy and American exceptionalism!

FP: I’m wondering what you think about the relationship between memory and responsibility. American culture doesn’t seem to take as much responsibility for the past in comparison to our European counterparts, but it would seem that there’s some hope that might change.

LB: As a cis-het, Southern, white Christian dude, the sociopolitical aspects of memory are tied up for me in exactly that: responsibility. I grew up on a civil rights battleground—Birmingham, AL—and I think had some nascent recognition as a child of the dissonance between how white authorities remembered Jim Crow and the Civil Rights Movement, and how those periods were represented by older black folks and primary sources like newsreels and photographs.

As a cis-het, Southern, white Christian dude, I have the responsibility to learn about and understand my—and my people’s—role in these systems.

When I was in middle school, the Civil Rights District around Kelly Ingram Park was built. The park is powerfully designed, and alongside it is the 16th Street Baptist Church and a really well-curated civil-rights museum. One time in high school, I was walking through the park with my then-girlfriend, and we were looking at one of the statues depicting child protesters. As we stood there, an older black guy approached us, and started talking about Bull Connor and the police dogs and firehoses. He told us how he had been in the marches as a child, and pulled up his pants leg to show the scars that the dogs had left on him. He told us that he had grown up in the neighborhood, but that the housing his family had lived in had been torn down to make room for businesses. It wasn’t until late in the conversation, he explained that he was living in the park.

That’s just one story from one person, but it was and is so illustrative to me. Here we are in a park that stands as a monument to struggle, confronted with the fact that—through a man’s personal memory—the systems the folks frozen in these statues were fighting are as alive as ever. So, this is the crucial element to me. That, as a cis-het, Southern, white Christian dude, I have the responsibility to learn about and understand my—and my people’s—role in these systems, to listen to those folks who these systems most harm, to make amends in whatever way I can, and to resist those systems, as somebody for whom they were constructed and are maintained.

FP: How important is it that you’re a band that strongly identifies with being from the South, especially in a time like now?

LB: Reading Ta-Nehisi Coates’ Between the World and Me really got me thinking about how whiteness has worked over time, and how it is working in the present moment. The notion of whiteness has always gone hand in hand with colonialism and white supremacy, and its fuzzy parameters have shifted differently in different places and in different times, but always with the mission of protecting colonialism and white supremacy. Right now, what seems to be emerging is an erasure of ethnic and regional identities in whiteness, a point that Coates makes towards the end of the book—that, increasingly, “those who believe they are white” define themselves by whiteness…

Whiteness is what facilitates church-going, well-mannered, hard-working, rural Southern white people to vote for an irreligious, greedy, gaudy, rude, unscrupulous billionaire heir from New York City—something that would have been unthinkable even 25 years ago. So, the more that globalism expands, colonialism and white supremacy necessitate the further homogenization of whiteness, and that, in turn, allows for “those who believe they are white” to deny or forget their specific people’s sins.

If I’m allowed by whiteness to deny my Southerness, to say, “No, I’m not really a white Southerner. I’m just an American,” then it follows I can distance myself from George Wallace and Bull Connor, and instead adopt whatever heroes of racism-forgetting American exceptionalism are presented to me at the moment… If I do that, whiteness promises me that I can absolve myself of memory and responsibility in one fell swoop and, at the same time, participate in an ever-burgeoning sense of white identity that isn’t bound by any particular lands, and, thus has no particular neighbors.

Of course, that is a false promise. We can’t forget and deny and manipulate our way out of responsibility, out of sin. By identifying as Southern, we not only identify by our specific cultural identity and the responsibility that entails, but perhaps more importantly, we identify with a place that is home to many cultures, all of whom are related to one another in different ways. To be a better Southerner is to be a better steward of the South, a better neighbor, a better student of memory.

FP: There’s something politically liberating about breaking habits. What are you doing differently on this tour?

LB: We’re definitely taking more time in between songs to explain them and speak to the audience in order to give them more context and meaning behind where our songs are coming from. I think that’s more important than ever now. We’re also seeking bills that aren’t just made up of a bunch of white, straight dudes…

It’s really a cathartic, galvanizing, energizing experience to play shows. That’s a conversation that’s been ongoing for us: How do we better do that? If you have ideas, we’re all ears [laughs].

The Rich Are Worried About Job Losses and Rising Populism