Chris Shupe, the Athens King, Hangs Up the Costume After 40 Years 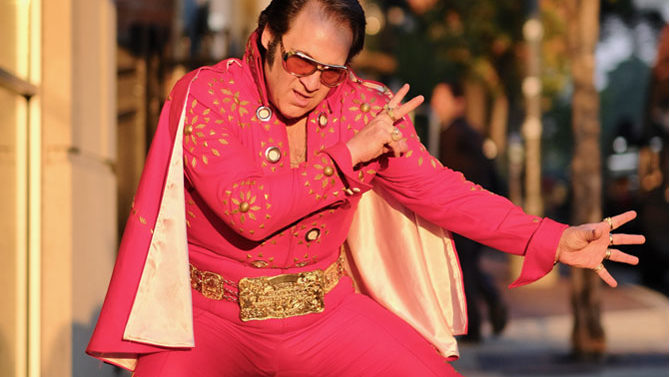 Elvis Presley may be long gone, but Chris Shupe will be the first to tell you that the King still manages to stop traffic every now and then. Years after he began paying tribute to the rock and roll hunk from Tupelo, MS, Shupe still gets a kick out of making the old ladies scream and shout.

This week, the Athens King, as Shupe has affectionately become known, will hang up the costume and cease crooning following his last public appearance. When he finally retires the replica Ray-Bans, Shupe will have 40 years of swinging his hips and pursing his lips under his belt (adorned with sequins, of course).

At the encouragement of his gospel-loving grandmother, Shupe began to mimic the moves of the heartthrob icon when he was 9 years old. “My grandmother would be in the next room, and I’d be doing Elvis. All of a sudden, she’d say, ‘Chris, you’ve got to turn that record down.’ I said, ‘Grandma, that’s not Elvis. That’s me.’”

After performing in school talent shows in his hometown of Oxford, GA, and other smaller events at the request of adults who adored his performances, Shupe noticed that others were taking him seriously.

“It became sort of a thing: ‘Oh, Chris knows how to do Elvis,’” he says. “I learned how to imitate not just his voice—which even as a kid I was pretty good at—but also the mannerisms and moves. The next thing I know, there’s a kid at school that can play drums. So, I’m 10 years old, and I’m doing Elvis with a live drummer, playing along with backing tracks.” 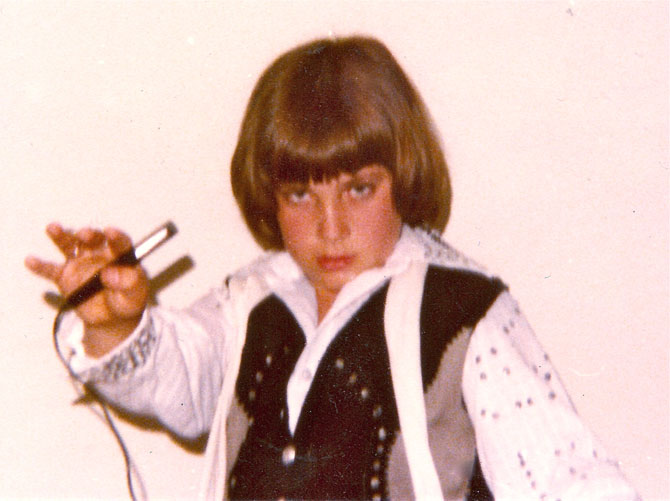 The Athens King at 10 years old.

While Shupe makes clear that paying tribute to late-era Presley is rewarding, he finds the circuit of King impersonators to be something of a cult. He says donning a customized costume and coloring his well-shaped sideburns is all in good fun; it’s the full-time impersonators that go as far as permanent body modifications that he finds a bit off-putting. “I really don’t think Elvis would have appreciated that,” Shupe says.

And Shupe doesn’t find the competitive element of impersonating especially appealing. In fact, the Athens King has found himself inspired by watching others hone their craft. “I like to watch other guys perform,” he says. “I can watch other guys and go, ‘Oh, that’s interesting. I might do that move myself.’”

Over his years performing, Shupe says he’s managed to balance the levity in his act with an honest appreciation for Presley. “I always say that it is a little like Chuckles the Clown, and there is some humor to the whole bit. And yet I consider myself a serious tribute artist. It’s not a joke to me,” he says.

Though he appreciates the entire arc of Elvis’ career, Shupe stays true to the artist’s Vegas era. His costume may be a different size, but it’s a period in the King’s career that Shupe finds particularly compelling.

To Shupe, Elvis’ stardom represents a moment in American popular culture where icons could be larger than life. He cites Muhammad Ali and Evel Knievel as two other giants who also captivated him as a young boy. Though he never spent one-on-one time with his hero, Shupe says he did catch a glimpse of the King during a visit to Graceland the year before Presley died. As Shupe recalls, Elvis cracked the window of his limousine to wave at a crowd of fans. However brief, the memory of the encounter has stayed with Shupe all these years.

While Shupe has done countless shows as the King with a karaoke machine in tow, he much prefers to have a polished group behind him. When it became clear that the act necessitated a live band, Shupe ditched the machine and began playing with Ed Connolly of Flood City Shootout and Joe Guerzo of the Vinyl Strangers in the 1990s. Andy Carlson, of the Normaltown Flyers, also accompanied Shupe during some of his early performances with a live band in Athens.

Playing with a band came natural to Shupe, who became acquainted with the Athens scene when he was a UGA student and football walk-on majoring in art history in the ’80s. These days, the TCB Band is comprised by locals Ryan Phillips on bass, Matt Donaldson on drums and Chris Hampton on guitar. This core is filled out by the Burning Love Brass, a four-piece horn section led by Martin Matheny, one of Shupe’s colleagues at WUGA 91.7 FM, where Shupe is program director.

Shupe’s personal history is as rich as the King’s career. Following a stint living in the Atlanta area, Shupe returned to Athens, where he began a career as a real estate agent. Following a dip in the housing market, Shupe found himself shifting gears again and began working part-time at WUGA before accepting his current position. “I guess you could say that I’ve had a really robust life. I haven’t really shied away from doing anything,” he says.

Despite years of sold-out shows, Shupe never quit his day jobs to go pro as a full-time entertainer. He flirted with the idea now and again, but he says he always wanted to have a life separate from the one he mimicked on stage. “I never wanted to be Elvis,” he stresses, before offering an insightful telling of the last few years before the hip-swaying singer passed away. It’s obvious that Shupe has studied the icon closely.

Shupe says his act would have become nothing without the local support he’s received over the years, often from unlikely sources. As he tells it, recurring business meals at Buffalo’s Cafe opened up an opportunity for him to perform at the restaurant. Although it’s not a typical performance space, Shupe says his willingness to handle ticketing and promotions for several years convinced the business that the relationship could be mutually beneficial.

To say his act has been a hit would be a bit of an understatement. Shupe points to 10 straight years of raucous shows at Buffalo’s as evidence that Elvis’ legacy is still very much intact. Shupe says the crowds are always varied; rabid Elvis fans from yesteryear get their kicks next to younger audiences that find Elvis perennially hip.

Shupe’s grandmother may have been the earliest fan of his act, but he’s quick to express his admiration for his wife and children, who have often been a part of the show, either assisting with the sale of merchandise or performing alongside.

“[My wife] thought it was kind of weird at first,” Shupe says. “Had she not been a girl with a good personality and a good sense of humor, we probably would’ve never gotten together anyway… She appreciated it, and grew to love it. It was never a career, so she never really married Elvis.”

And Shupe beams when he says his kids’ participation in his performances “rubbed off.” His son is a performing arts major at Limestone College in South Carolina, and his daughter was recently awarded “best actress” in a one-act competition.

Asked if he’s rehearsing anything special for his final performance as the Athens King, Shupe says he’s much more interested in the show going off without a hitch. “I’ll probably just be trying not to get too emotional about it,” Shupe says.

Though Shupe says he’ll likely be holding back tears during his final performance, he’s adamant that life will go on after the King. “I don’t want to just be the guy who does Elvis. I don’t want to be defined as the radio guy, or the UGA football walk-on, or the crazy Georgia fan. I don’t want to be any of that,” he says. “I want to be Chris Shupe.”