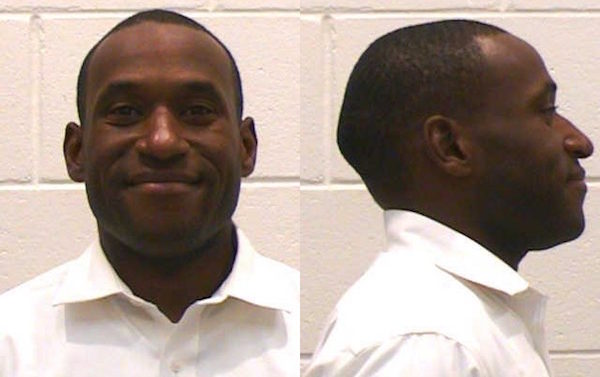 An itinerant preacher was arrested outside the Tate Student Center Tuesday and charged with elbowing a student in the face during a confrontation in front of about 200 onlookers.

The preacher, Ross M. Jackson, 33, “hit the student during a tense confrontation in which he and the student stood eye-to-eye, separated by a space of about one inch,” the Athens Banner-Herald reported.

The student, Keaton Law, told the Red & Black that he was upset that Jackson was calling students “sinners” and “whores.”

“This man came to our campus yesterday with a couple of his buddies claiming to be saints, and they were just preaching hate,” Law said. “And I don’t think that’s acceptable. We shouldn’t be subjected to that kind of verbal abuse all day.”

Law said since he only had one class today, he wanted to ensure the preachers were removed.

“I made it my mission. I said ‘I’m going to drown them out. I’m going to talk over them,'” he said. “Eventually it just became too much for him and he elbowed me in the face and it pushed me.”

“At that point he had broken the law,” he said. “And my mission was complete.”

UGA police who were monitoring the crowd witnesses Jackson elbow Law and arrested him.

Jackson—the founder of Revival Mission Ministries, an organization devoted to preaching on college campuses and street corners—told Grady Newsource that he believes race played a role in his arrest, the second of his preaching career.

“Totally unprofessional,” Jackson said, “They appeared to show an extreme low level of respect for me. And I obviously understand that that is partially because I am black.”

Jackson added that the situation may have been different if the roles had been switched.

Jackson was released from jail a couple hours after his arrest on a $1,500 bond.

Turns Out Kirby’s Not So Smart After All