Turns Out Kirby’s Not So Smart After All 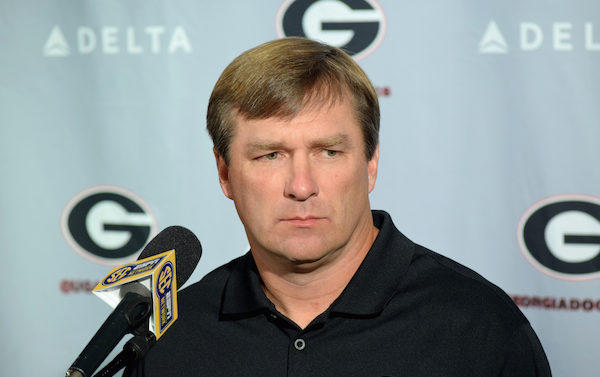 “Kirby Dumb” is the most childish, cheesy and just flat-out bad nickname I’ve heard in a long time. Unfortunately, more and more, it seems to fit UGA head coach Kirby Smart to a T.

The Bulldogs suffered a 17-16 upset at the hands of Vanderbilt (VANDERBILT!) Saturday in Athens, and I’m not mad at all… jk, I’m really mad. It was the worst Georgia loss I’ve seen in some years. And while the players played far from their best, this loss—like the narrow escape vs. Nicholls State and losses to Ole Miss and Tennessee—falls on the shoulders of Smart because of his questionable decisions and his team’s penchant for playing down to competition.

Smart was out-coached by Vandy head man Derek Mason. Let that sink in for a moment. Mason, who won his first SEC road game on Saturday, has been the laughingstock of the SEC since taking over for James Franklin, and Kirby and offensive coordinator Jim Chaney made him look like a genius. Twice in the fourth quarter, Mason called a timeout that made Smart and Chaney rethink their approach. Ultimately that led to the loss.

The first timeout came with six minutes left in the fourth quarter. Down one, Georgia had 4th-and-8 on the Vandy 41, and Smart kept his offense on the field ready to go for it. At the time, he sensed, along with everyone watching the game, that the Dawgs would have few more chances to get that close, because we barely got that close all afternoon, and he brought the offense onto the field. Mason called timeout, and Smart brought the punt unit on the other side. The timeout was enough to make Smart overthink his decision, so he decided to punt the game away. Point Mason.

The second timeout came on the next Georgia drive. Time was running out, and Georgia had to get in field goal range. The Dawgs got to 4th-and-1 back at the Vandy 41 with just a minute to go. Nick Chubb struggled all afternoon, rushing for only 40 yards, but when push comes to shove you give the ball to your best player, right?

Wrong. Georgia lined Chubb up at fullback and ran Isaiah McKenzie—not a tailback—into the halfback position. Mason saw the strange formation and rightly called a timeout. At this point, most coaches would think Vanderbilt saw what UGA was trying to do with the play, so you run a different one when you come back out. The Bulldogs came back to the line, Chubb at fullback, McKenzie at tailback. And wouldn’t you know, the Vanderbilt defense read it like a book. Smart and Chaney tried to be clever once again and it bit them, and all Georgia fans, in the ass. Point Mason. Win Vanderbilt.

That isn’t the most concerning thing, though. More concerning is the team’s seeming indifference to everything happening in the game. The players never looked ready for this game. Like they’ve done so many times this year, they played down to the competition. And that falls heavily on Smart’s shoulders for not having them ready to play.

Aside from 95-yard return to open the game that led to an early Vandy TD and the stops in the fourth quarter, Georgia was the better team. The talent gap was clear to anyone who watched. Smart just didn’t have his team ready to play every down, and Mason did. Being underprepared for a game once in a blue moon is expected, even of the best teams. But under Kirby, it’s been consistent. Not once this season has Georgia come out of the gates amped and ready to get after the opponent.

I’m still glad Mark Richt is gone, because I think we’d be in close to the same boat this season if he was coach. But Smart’s deficiencies so far lead me back to the argument that major programs should never hire assistants. You just have no idea what you’re going to get with them. Many times, it’s a guy who’s great at coaching a position or unit, but has no clue how to run a program. If I had my druthers, Justin Fuentes, Gary Patterson or Tom Herman would be coaching UGA right now, guys with a track record of success.

We’re stuck with Kirby, though. He has the pedigree to be a good coach. He has the time to improve and learn from his mistakes. Next season will be a much better barometer of him as a head coach. But his boneheaded decisions and the lack of preparedness in the team has me worried, and I’m afraid my biggest fear about this hire may be true: Instead of hiring the next Nick Saban, we hired the next Will Muschamp.

Athens Power Rankings for the Week of Oct. 17