Wil Maring and Others Play the North Georgia Folk Festival 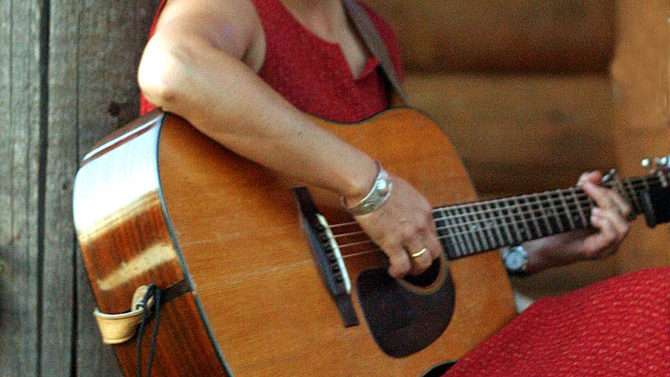 The Athens Folk Music and Dance Society will present the 32nd annual North Georgia Folk Festival, which celebrates all things folk, on Saturday, Oct. 8. People of all persuasions will gather at Sandy Creek Park to enjoy art, food, music and dance. The family-friendly festival provides activities for attendees of all ages, including children. There will be at least three hours of supervised kids’ activities, including crafts and the Rebecca Sunshine Band, a local children’s music group.

This year’s Folk Fest features 13 artists—10 on the main stage and three in the songwriter’s showcase. Jordan says he likes to have a wide variety of artists. With the talent hitting the stage this year, audiences will hear influences from bluegrass, classical, blues, ’60s folk, Americana and more.

As the Folk Fest has gained recognition and prestige over its first 31 years, it has drawn the attention of artists from all over the Southeast and even beyond. One such artist, Illinois-based Wil Maring, will be featured on the main stage this year. Maring has routed a Southeastern tour specifically around the festival.

In June, Maring met Jordan at a songwriting workshop she was teaching in Tennessee, and Jordan mentioned the Folk Fest. Maring said, “Oh, you do a festival! I’d love to come and play for it someday.” Jordan replied that it was a done deal.

Maring’s music is rooted in a love of traditional sounds. From the time her parents put her in classical guitar lessons, Maring knew her real passion was for folk and bluegrass. With this in mind, Maring says her guitar instructor taught her the basics of those genres on the sly. Maring went on to play in a bluegrass band, a jamboree band and even spent 10 years playing with a band in Germany. She says she is excited to head down South to be around like-minded musicians.

Maring says her music is “an opportunity to feel,” adding, “One song will make you a little sad, then the next song will get you out of your chair, then [there’s] a cowboy song, then a ‘look in the mirror’ song.” Partnering with Maring is Robert Bowlin, an award-winning bluegrass artist. Maring says Bowlin’s talent allows listeners to feel at a whole different level. These two “have songs where you’re looking into your future, and [it] helps you delve into your past.”

Other artists featured on the main stage this year include Athens’ own Hobohemians, a band whose sound is inspired by American music of the 1920s and ’30s. With its big-band feel, the group will have you feeling like you should be on a wide porch sipping a mint julep or jiving in a prohibition-era speakeasy.

Over in the songwriter’s showcase, which is headlined by Cortez Garza, you can hear former local Drew Kohl. Kohl got his first electric guitar for Christmas when he was 13 and switched to acoustic when he was 16, when he fell in love with folk. In college, Kohl played in a bluegrass band that took every opportunity to play, even playing street corners on Friday and Saturday nights. Now based in Nashville, Kohl returns to Athens for his first festival. Kohl’s second EP comes out Oct. 21.

These artists and many others will share their talents with festival-goers this weekend. So come on out, and, as Jordan says, enjoy this long-running event, which has “no agenda except to have a beautiful day.”