Gregory Frederick Documents the Athens Music Scene, One Show at a Time 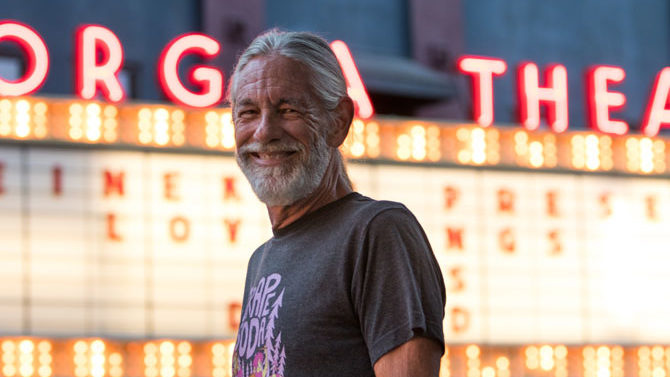 With the number of clubs, performance halls, bars, breweries, restaurants and other live-music hotspots in Athens—even the local library hosts concerts—you’re guaranteed to find at least one show to attend on any given night. And if you go, there’s a good chance you’ll run into Gregory Frederick there. Wherever “there” is.

In January 2014, Frederick, a former school teacher, realized the need for documentation of the current Athens music scene. He had an interest in photography, a steady hand, an iPhone and the time. “None of the stuff that was in the ’70s was archived well, and it needed to be done,” he says. “And the teacher in me said, ‘Hey, I’m retired. I can do this. Why not?’”

So, Frederick began what has become Athens, GA Live Music. He began regularly attending and documenting local shows, starting by taking videos on his phone. “I’ve treated it like a job—that you need to be out there. You had to show up. You had to do what needed to be done.” Frederick says he has shot as many as seven full sets in one night, and up to 21 consecutive nights in a row. “I felt like I was on tour,” he says.

Frederick is no Roger Deakins, and at first, his work focused more on the documentation aspect than on the quality. But Frederick admits that “quality counts,” and says he hopes to continue to improve.

But boy, does he document. Frederick normally posts videos on his Athens, GA Live Music YouTube channel within 24 hours of shooting them. He has posted over 8,400 videos on his page so far, and says he is happy to get 3,000 videos up in a year. On average, that’s more than three a day. This speaks both to the amount of music played in Athens—nightly, weekly, annually—and to Frederick’s willingness to get out there and record it.

Frederick’s project not only conveys the spirit of Athens music, it exudes uniquely Athenian qualities, such as the integration of musicians in the wider community. “I’m rubbing shoulders with people I’m seeing on stage the night before… and will see on stage the next night,” Frederick says. His documentation also speaks to the “proliferation of venues” in Athens. For Frederick, this “has made it an easy go-to. Both the number of venues and the proximity of venues.”

By attempting to communicate with at least one band member at every show to inform them of his recording, Frederick tries to make clear to performers that he respects their rights. Most artists are willing and, usually, excited to let him do his thing.

In addition, Frederick funds his entire project on his own. That includes cameras—he has improved on the iPhone—gas, parking, tickets and sometimes drinks. He assumes these costs most nights—for two and a half years now. Frederick even goes as far as refusing free entry to shows. “It’s been offered numerous times,” he says. “I sometimes take people up on it, but most of the time not.”

Frederick’s work has not gone unnoticed. The artists that he documents, venue owners, doormen and, most recently, the Athens Area Arts Council have taken note. On Aug. 1, the AAAC announced that it would award Frederick a $500 grant.

“Offering a grant to Gregory is our way of recognizing the countless hours he has put into supporting the local community,” says AAAC Grant Chair (and Flagpole Arts Editor) Jessica Smith. “His video archive is inarguably the most comprehensive and accessible record we have of the current music scene, and is significant not only in the way that it documents day-to-day happenings and captures performances that may have flown under everyone’s radar, but for its ability to present Athens to a worldwide audience.”

For Frederick, the grant acted as a validation of his work. “The grant has given me a bit of a boost, in the sense that people in the arts scene are truly valuing what I am doing and what I have done,” Frederick says. “It tells me that what I am doing is right.” The money has also given Frederick a chance to improve the quality of his work. Though he still pays for tickets and drinks, he looks forward to using the grant money to purchase a new microphone for better audio.

Though he works largely on his own, Frederick is eager to acknowledge his wife, local audio engineers and venues, people who worked to document the music scene before him and the UGA Music Business Program, among others, for helping him take his project this far. And with the rest of the Athens community, Frederick hopes simply to share his mantra: “Support live music; embrace the energy.”

Connect with Frederick at facebook.com/athensgalivemusic, and find his YouTube channel here.