Don Chambers Teams With Canopy for ‘Everything That Rises’ 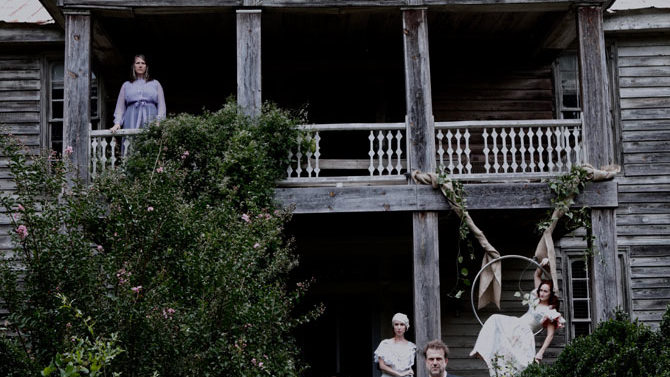 A waking dream: That perhaps most accurately describes what attendees of Canopy Studio’s “Everything That Rises” are in store for.

In Canopy’s new show, music and movement mold together to create a storytelling experience. “It won’t be like a play,” Mary Jessica Hammes, ETR’s scriptwriter and Repertory Company member, says. “It’s going to be a very [immersive] experience,” she says. “We wanted to get… the eerie, strange, surreal feelings.” Hammes describes the “Southern gothic aerial theater performance” as a “gritty, rock-and-roll mix of Flannery O’Connor and William Faulkner.”

Hammes and director Melissa Roberts have both been interested in Southern gothic long before this production came under way. Hammes, whose first tattoo has O’Connor connotations, says, “[Southern gothic] was a genre of writing that I’ve appreciated from a very young age… I [first] read Flannery O’Connor when I was in third grade.”

Roberts, who has wanted to do “something Southern gothic for over a year,” according to Hammes, approached Hammes just under a year ago and asked her to write “either a script or short story.” They wanted to give an update to the typical Southern gothic story, and decided to set their tale in the late ’70s or early ’80s.

While non-traditional in time and performance, the Canopy repertory members go even further in stepping outside of the norm. The set, designed by Timera Temple and Dave Dykes, is often incorporated into the acts. The performance of Anne Shaffer, a repertory member and the wife of John Barner, the show’s drummer, will incorporate “banging on various ladders and metal things,” Shaffer says. “When we first started brainstorming for the piece, we started thinking about ways we could actually use the equipment as an instrument.” By using taps on their shoes and even a little audience participation, percussion will be the main driving force in this act.

If your love for Southern gothic isn’t quite as extreme as your love of local music, this groundbreaking show will also appeal to you, as it features live music exclusively by Don Chambers and his band. When Roberts first had the idea for the show, Chambers’ music immediately came to mind. “He encapsulates this genre,” Roberts says. “He can tell those stories. He kind of has that essence about him.”

Roberts listened to Chambers’ entire catalog for a while, trying to figure out which songs were most fitting for the show. She narrowed it down to about three or four songs per act, then the performers chose which they thought best fit their own acts from that selection.

“The combination of movement, imagination and music… is a new territory for us to explore,” Chambers says. “We are creating a soundscape for them to move around in, a rhythm to react to. It’s a big ship with many people working to send the audience into a dreamworld.”

For fans of Chambers, this production is a chance to see his songs transformed and tucked within the confines of an overarching narrative. This “allows the songs to stretch out and be something they haven’t been before. You make all sorts of imaginative connections when you put a song in the context of a story,” Chambers says.

After getting to see some of the acts put together with his music, Chambers says, “It’s been surprising to see the choices and associations the aerialists have made—taking a song that is about one thing for me and making it about something different.” But Chambers likes it for his music “to move and breathe,” he says, and “Everything That Rises” provides many opportunities for that. “What I’m excited about is having a visual… something completely different,” he says. “To have dance and movement to respond [to the music].”

With “Everything That Rises,” Chambers and the aerialists are pushing boundaries, and they are excited. “The fact that I’ve never done anything like this before, it feels a bit like I’m stumbling around in the dark,” Chambers says. “But I like that.… it’ll make it a bit of an adventure.”