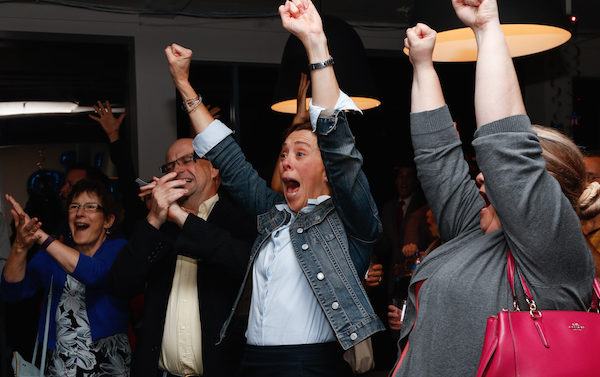 In District 117, Deborah Gonzalez overcame Republican opponent Houston Gaines’ $200,000 war chest and much-publicized support from Democratic Athens-Clarke County Mayor Nancy Denson—which led to the ACC Democratic Committee removing Denson from her post on the committee for violating its bylaws—defeating him 53 percent to 47 percent.

Some feared that Denson would influence Democrats to support Gaines, her former campaign manager, but the move may have sparked enthusiasm for Gonzalez’s candidacy among Athens Democrats. She won 66 percent of the vote in Clarke County, where turnout was 22 percent of registered voters, far exceeding expectations for an off-year special election.

“I always believed we could win,” said Gonzalez, a media and entertainment lawyer. “We’ve been canvassing for the past two weeks consecutively and getting really good feedback.”

Even Wallace expressed surprise at his margin of victory. “This is mind-blowing, but it’s a testament to the hard work of so many people,” he said.

The seats opened up when Gov. Nathan Deal named state Rep. Regina Quick (R-Athens) a Superior Court Judge and Rep. Chuck Williams (R-Watkinsville) head of the Georgia Forestry Commission in August. Both districts were drawn specifically to elect Republicans, to the point where Democrats didn’t even run candidates in 2012, 2014 or 2016, but Democrats viewed them as potential pickups because Donald Trump underperformed compared to typical GOP candidates.

“I think the takeway is we should always strive to have competition,” said House Minority Leader Bob Trammell, the newly elected head of the Democratic caucus, who attended Wallace’s election-night party. “We should contest districts like these where we haven’t had candidates, because voters are craving choice.”

T-SPLOST, a 1 percent local sales tax that will raise $105 million over five years for roads, bridges, sidewalks, trails, buses and bike lanes, passed by a 74–26 margin.