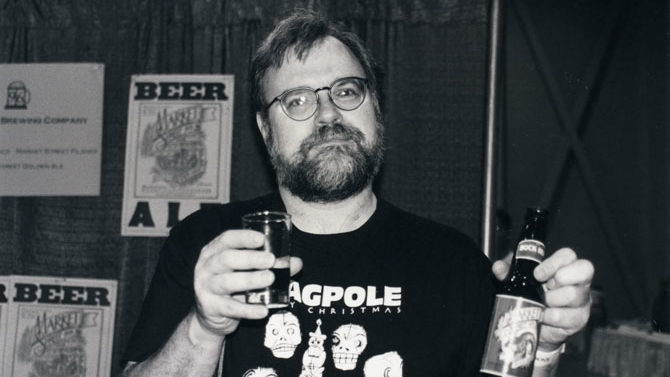 1987 In the beginning: “Vol. 1, No. 1 of Flagpole, a music rag, Colorbearer of Athens Alternative Music.” In that first issue, founder and editor-for-life (ha!) Jared Bailey explained that “Flagpole Magazine is a music magazine which will evolve to the needs of an ever-changing music scene. We are open to contributions of all kinds…”

The first issue didn’t have many contributors, just mostly pictures, cartoons and ads, including one showing the 40 Watt’s November calendar, with Love Tractor playing on the 12th and 13th and the Bar-B-Q Killers on the 20th. The 40 Watt was closed for Thanksgiving but reminded readers that R.E.M. was playing at the Fox during the holidays.

Here in its entirety is the only editorial piece in the first issue, written by local musician and club manager Bryan Cook:

“OK, so I can write anything I want, so here goes. Anybody who lives in Athens and is not registered to vote should register now! The only way to change the rules that the Prince Avenue Baptist Church pushes on the city is to elect some council members who are not intimidated by the so-called “Christian” wishes. How many times is the church going to bus elderly shut-ins to the polls whenever an alcohol-related issue comes up? If 18–21-year-olds voted, their opinions would carry more weight with the city fathers. Let’s all work together to change the fascist blue laws of Clarke County.

“On another topic, what does conformity offer people? Why must people dress uniformly along socioeconomic lines? Granted, there are exceptions (rich kids slumming it, rednecks in button-downs), but they are far outnumbered by the little Nazis who wear what they are told by the director of their social clubs. I think that is stupid.

Bryan set Flagpole pretty much on the editorial path it has followed during the ensuing 30 years, and, by the way, he also named Flagpole. 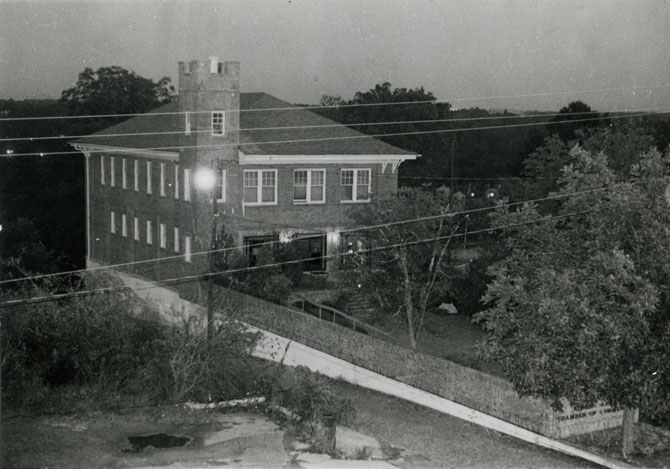 The Polshek architects said the firehall couldn’t be incorporated into the Classic Center.

1992 Flagpole turned five in 1992. We had an exhibit of over 50 Flagpole covers (a tenth of the total to that date) upstairs at the Globe, and the Monsters of Local Rock show was the attraction at Club Fred, followed by a birthday bash at the 40 Watt that headlined Sun Ra and The Year 2000 Approach Arkestra. That same night, Widespread Panic was playing at the Georgia Theatre, so maybe our birthday party was sparsely attended.

In the real world, elections were approaching, and Flagpole Editor Steve Crawford was urging everyone to attend the rally at the Tate Center to help Michael Stipe and vice-president wannabe Al Gore elect Bill Clinton and save the country from a second term of the Bush-Quayle administration that “seeks to divide us with fear and prejudice, take away our freedoms in the name of ‘justice,’ and further distance the poor from the wealthy as they mortgage the future for short-sighted greed.” The more things change, the more they remain the same, huh?

The Daily Groceries Co-op was opening next door to The Grit, and the number of unrelated persons who could live together in single-family neighborhoods was reduced from four to two, while Flagpole Publisher Dennis Greenia relentlessly slammed the Polshek design for the Classic Center, on which local government had already spent over $1 million. He warned that it would never work in Athens, and it didn’t. Dennis was also reminding readers that Sunday alcohol sales in restaurants would be on the November ballot.

Five Eight was playing at the 40 Watt, and the Georgia Theatre featured David Allan Coe with special guests Kinchafoonee Cowboys. 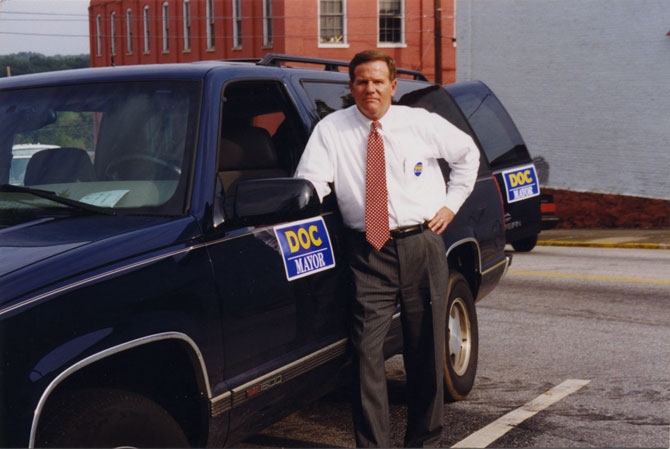 Doc Eldridge promised bike lanes on Prince Avenue when he ran for mayor, but not.

1997 The first 10 years! Big changes at Flagpole. Managing Editor/Bookkeeper/Office Manager/Proofreader/Web Manager Robin Littlefield left to return home to Dahlonega and thence eventually to Oregon to get a law degree. (She’s now practicing in Nashville.) Richard Fausset joined Flagpole as our all-knowing editor and yanked us forward in the breadth and depth of our coverage, going on circuitously to his present panopticon position as Southern bureau chief for The New York Times. Margaret Moore, who had directed distribution, moved in-house as classifieds and office manager. After a while, she became our longtime managing editor. And a guy named Russ Hallauer, who had been working the front desk (after assembling it) became an ad rep and later went on to fame and fortune as head of Ghostmeat Records with a day job managing the regional advertising operations of Comcast Corp.

Bob Dylan played the Classic Center, and the B-52s were in Stegeman Coliseum. (Our reviewer referred to them as “the aging B-52s.”) Looking back from the vantage of 1992, we quoted Vic Chesnutt reviewing R.E.M. at the Omni in 1989: “They make a roar like a two-story stereo, and people shake. You are terrified and ecstatic, twitching your head and squinting to see the boys a basketball court away doing it up like professionals. But then it occurs to you, the drums are too loud.”

In other news, an unarmed, “hog-tied” man died in police custody, but the D.A. cleared the police of wrongdoing. The city government’s finance department went through the Flagpole Music Directory and sent business-license notices to all the bands listed there. Doc Eldridge announced his candidacy for mayor—as a Democrat! Fausset interviewed an activist from New Orleans (Fausset’s hometown) about that city’s decision to rename schools named for slave owners, beginning with George Washington Elementary. The writer Terry Kay moved here to make Athens his home. Flagpole’s picks for 1997’s 10 top movies were The Full Monty, Waiting for Guffman, L.A. Confidential, Hype, Ulee’s Gold, The Ice Storm, Brassed Off, Children of the Revolution, Grosse Point Blank and As Good as It Gets. 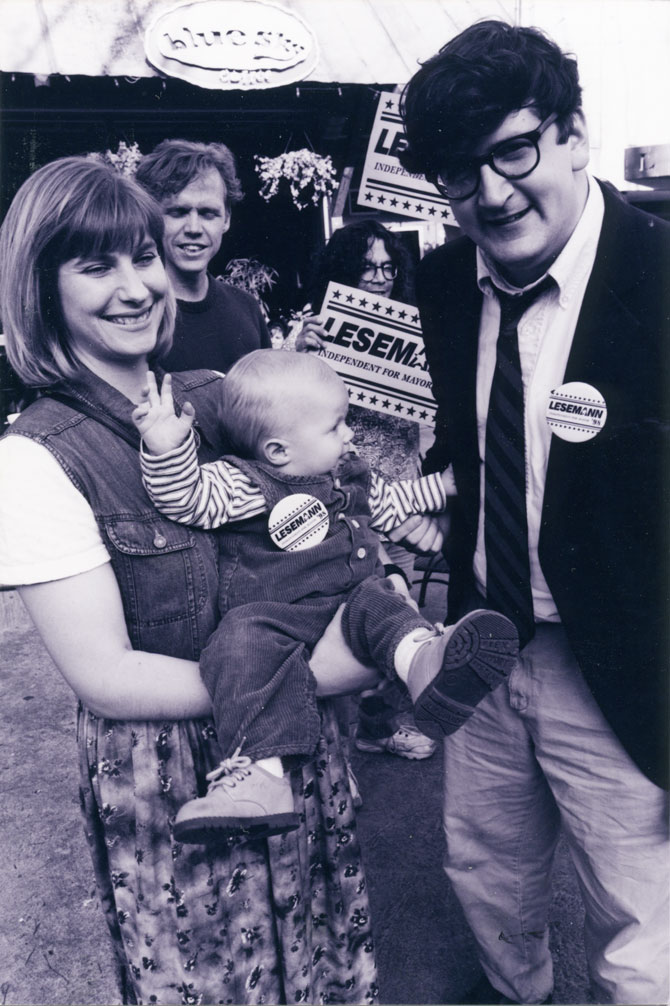 Ballard Lesemann might be in the U.S. Senate right now if it hadn’t been for his editor, Richard Fausset.

2002 In our 15th-anniversary issue, we looked back over the preceding five years at some topics that are still relevant. In 1998, a New Jersey-based urban planner summed up the results of a citizen participation process held here to determine how citizens want Athens-Clarke County to grow in the 21st Century. The top item: 79 percent of respondents wanted a city pattern that offered retail and community resources within walking distance of homes. So much for consultants.

Also in 1998, popular Flagpole Music Editor Ballard Lesemann announced his campaign for mayor in that year’s April Fool’s issue. It was supposed to be a joke, but Ballard came to like the idea and would have run, had Fausset not promised to fire Ballard and resign.

Five Points was threatened with an Eckerd’s drug store, which Flagpole opposed, saying, “That sprawling neighborhood radiating out from the intersection is a fragile part of the ecosystem that makes up Athens.” Now, we know more about that fragility, since the current trend among developers is just to tear the neighborhood down, house by house.

Again, looking back to 1998, Flagpole noted that mayoral candidate Eldridge came out for a biking/walking grid of connectivity. “A pilot project establishing a bike lane on Prince Avenue can be accomplished very easily and inexpensively and is something I have proposed that we do,” Doc promised. Nineteen years and counting on that one.

In 2000, Brad Aaron wrote about the demolition of the trestle system that 17 years later is finally being replaced by the Firefly Trail: “This much is known: In a closed-door meeting on July 5, the Athens-Clarke County Commission decided not to pursue the purchase of historic downtown rail trestles, clearing the way for their demolition. How it was allowed to happen—with no public input—is open to interpretation.”

In that anniversary issue, Allen’s had UGA vs. Ole Miss on the big screen; Big City Bread advertised a Thanksgiving menu; Copper Creek advertised “Athens’ only micro-brewed beers,” but Terrapin was already advertising for employees. The Herbie Hancock Quartet was coming to the Classic Center, Drivin’ N Cryin’ was headed for the 40 Watt, and at Boneshakers, DJ Isaac McCalla was “spinning groovy soundscapes for ‘Sweat’ night.” And all along through the years, William Orten Carlton was teaching Athens about good beer in the pages of Flagpole. 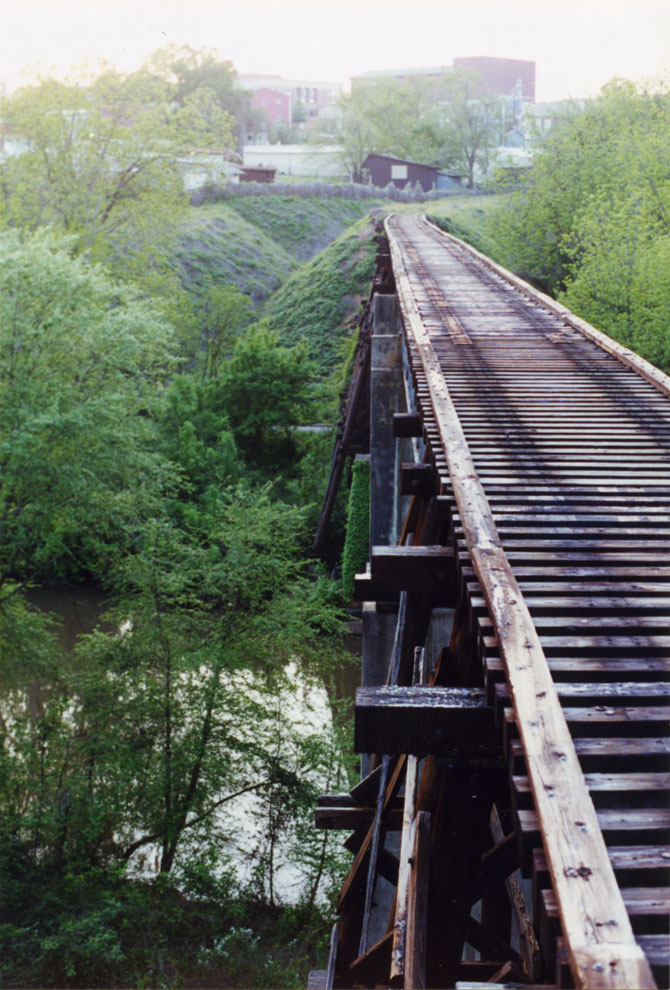 ACC missed the chance to buy this trestle over the North Oconee River and had to replace it 17 years later for the Firefly Trail.

2007 Our 20th-anniversary issue coincided with a long-running drought, and by November, the precipitation deficit for the year was approximately 16.6 inches. Even more ominously, Athens was on the short list as a site for the National Bio and Agro-Defense Facility—a giant Homeland Security installation to study deadly pathogens that might be used by terrorists. Skeptics called it the “Bio-Terror Lab,” and all the hell they raised, as reported and amplified in Flagpole, made the government rudely aware that the facility was not welcome here among a large part of the population. It eventually was awarded to a Kansas community that greeted it with open arms. All of those Kansans are now deceased. (Just kidding.)

At this point in Flagpole’s development, we were still near enough to the early days that staffers and former staffers had vivid memories of the struggles involved in birthing a new enterprise. Some of those who were in on the beginning wrote about those first years—the scarce resources, the long hours, the inadequate equipment, the cramped office space. At the same time, their memories also encompassed the camaraderie and creativity of working together and making it up as they went along and the satisfaction of getting another issue published and distributed. There were also the perks, like free tickets to shows and the opportunity to meet and interview musicians, writers, artists and politicians—realizing the access that accrues even to those who work for a homemade, made-up magazine. 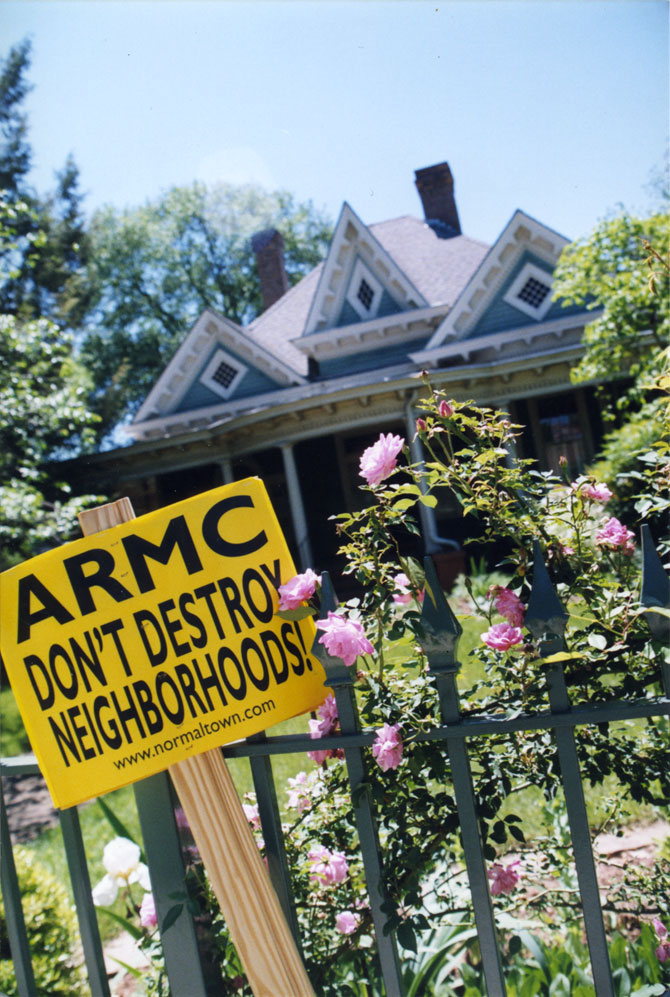 Flagpole has always been mixed up in local issues.

2012 As Flagpole turned 25, local government interest in fostering a mixed-use river district down the hill from the Classic Center came to a screeching halt when Atlanta’s Selig Enterprises bought an option on the Armstrong and Dobbs property. The government had already chickened out on the “Blue Heron” project, an ambitious idea for a high-tech incubator area with housing, restaurants and other amenities, including (gasp) an amphitheater. Selig couldn’t get it together in the face of citizen opposition fueled by the developer’s flirtation with Walmart, so the Armstrong and Dobbs property eventually morphed into The Mark. Meanwhile, the Classic Center and its hotel have proceeded to wall off downtown from the river, thus dooming forever the possibility of “LoDo,” or “lower downtown,” as a Flagpole editor tried to name it.

Cobbham was up in arms in opposition to a Sigma Chi fraternity house proposed for a vacant lot on north Milledge Avenue. So persuasive were our old Cobbham allies that the Sigma Chi alumni gave up on that parcel and instead bought the building on Foundry Street that housed Flagpole, necessitating this paper’s move to our present palatial digs on Prince Avenue.

In our 25th anniversary issue, original publishers Jared Bailey and Greenia described how Flagpole came into being, while Fausset, former city editors Ben Emanuel and Dave Marr, former distribution manager Lisa May and former music editors Hillary Meister, Jason Slatton and Michelle Gilzenrat Davis elucidated some of the developments in the growth of Flagpole. The gist of their reflections is that Flagpole grew in popularity and relevance by writing with passion and involvement about our town, taking sides and fighting for what we saw as best for Athens—politically, economically educationally and musically. But their discussions made clear that they never took themselves too seriously.

You can now access back issues of Flagpole through our partnership with the Digital Library of Georgia at gahistoricnewspapers.galileo.usg.edu.