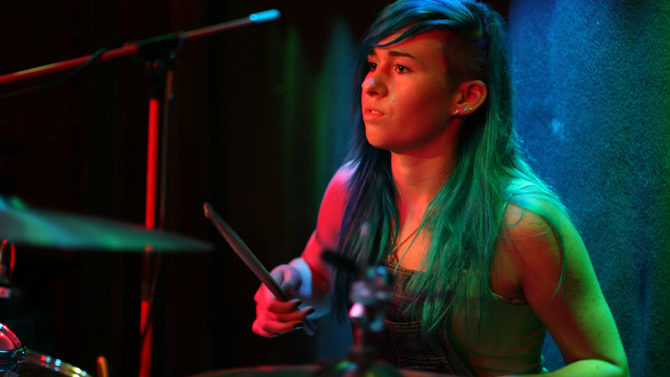 Over 10 countries and more than 20 states were represented at the 10th annual Girls Rock Camp Alliance Conference on a New Jersey farm during the first weekend of April, including this correspondent and two others from Athens, where the nonprofit Girls Rock Athens is expanding its reach to include adult women with a Ladies Rock Camp this weekend.

The Girls Rock Camp Alliance, per tradition, renamed the farm’s dorms, workshop and studio spaces and a dining hall in homage to female musicians. There were Aaliyah (Big) and Aaliyah (Small), Grace Jones, Bessie Smith and Dolly Parton. Members of the GRCA board of directors passed out zines, which served as a program for the weekend’s workshops, caucuses and solidarity working groups.

“We aren’t always in control of the world outside of this space, but we can decide what happens here,” a board member said. Attendees raised their hands and contributed to group agreements: “Assume best intentions,” “be open to critique” and “move up, move up,” urging talkative folks to listen and quieter people to speak more. (If you’re getting the impression that the three-day weekend is a brief Socialist utopia, you’re not wrong.)

The conference is an opportunity for camps to collaborate and refine their work as music instructors, leaders and activists. It also provides opportunities for participants to talk about how the conference and camps across the world can become ever more accessible to people of various backgrounds.

This year, GRCA offered workshops in seven categories, or tracks, such as “First Time’s the Charm: Rock Camp Will Change the World” (for new camps getting off the ground), “Core Track” (things like “Camp Finance 101” and “Building a Board”) and “Political Education” (social justice programming like “Breaking the School to Prison Pipeline”).

Another type of meeting, for folks with identities that are marginalized, were called caucuses. The seven caucuses were exclusive to folks of the identity delineated in the name of the caucus, and on the last dinner caucuses reported back to the conference about ways the alliance, conference and individual camps could advance their work in supporting oppressed peoples. Solidarity working groups, such as “White People Challenging Racism” and “Cisgender People Working for Trans Liberation,” were also scheduled throughout the weekend. These groups met to discuss how they could work in solidarity with people experiencing suppression, without co-opting conversations about struggles they do not face.

At mealtimes, attendees shared stories and information from the workshops they had taken. Some panels seemed to invoke universal responses. Everyone cried during “Music of the #BlackLivesMatter Movement.” “What Are You Doing Here? Black Women in Metal,” “Electronic Music Powered by Girls” (which taught participants to build a contact microphone) and “Developing Trans* Inclusive Language For Girls Rock Camp” seemed to be universally appreciated. Others received more mixed reviews. The necessarily decentralized nature of workshops sometimes created disorganized or circuitous conversation. On the whole, though, the focus and commitment of attendees made for effective work in identifying problems and proposing solutions.

On the last day, Girls Rock Athens attended “Southern Belles, Hell and Fostering Change.” Facilitated by Meeghan Kane, a board member of Girls Rock Columbia and teacher at Benedict College, the workshop addressed the unique challenges of our region.

The South “is politically, socially and culturally conservative, in general, and religion often plays a prominent role in the lives and communities of Southern women. We want to explore ways to build inroads in those communities,” the zine’s description of the workshop read. Some camps, nested in more deeply red communities than Athens, described feeling fear for campers due to their inclusive philosophy. In those communities, camps sometimes drill counselors and volunteers in lock-downs in case of a shooting.

Others expressed concern that explicitly inclusive language would ostracize the kids most desperately in need of an outlet for expression, whose parents might not allow them to attend. But everyone knew that a discriminatory environment would not foster the kind of empowerment such a child might need, anyway, and of course unacceptably excludes whole communities of people. An image of the South began to form in my head: a snake, eating its own tail.

Ladies Rock Athens, a camp for women and folks outside the gender binary, is May 13–15 at Athens School of Music. Tuition is $200 or $150 if you sign up with a friend, and registration is open until all spaces are filled. No musical experience is necessary, and all proceeds go towards materials, space rental and scholarships for youth campers in August.