Even With Supreme Court Ruling, Abortion Access Is Challenging 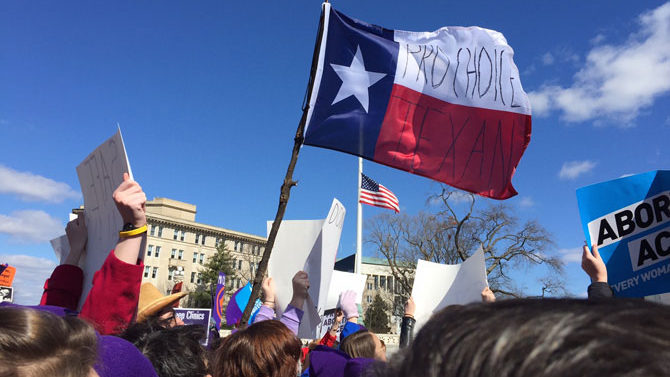 When I first pitched this story to Flagpole, I wanted to share the meaning and impact of the Supreme Court’s ruling against Texas abortion-clinic restrictions in Whole Woman’s Health v. Hellerstedt last week. A ruling in favor would have shuttered more than half of Texas’ abortion clinics, and an avalanche of similar laws was sure to follow in other red states. This case was the most important for reproductive health, rights and justice since Roe v. Wade, and abortion funders like Georgia’s Magnolia Fund and Access Reproductive Care Southeast toasted champagne flutes when we heard the news.

Then my mother called and told me that my grandmother will die sometime between the eve of this writing and two weeks from now.

I was and am jubilant over our recent victory. But, now, saying goodbye to my Nana—who owned between three and 20 cats every year of her life until now; who patronized Judy Chicago’s 1970s feminist art installation, “The Dinner Party”; who gave me ocean jasper when I got married and an amethyst when I got divorced—I am also furious.

My grandmother Nancy was 28 when abortion was decriminalized in this country. Thirteen years prior, the American Journal of Public Health estimated that the number of illegal abortions performed that year was between 200,000 and 1.2 million. If that range seems questionably wide, consider how unlikely anyone involved in a back-alley abortion would have been to volunteer this information, and how a lot of data was gleaned from emergency room records and the corpses left after botched procedures.

If you’re wondering how far we have (or haven’t) come today, consider that laws written under the guise of guarding women’s health (with no mention of other genders that seek the procedure) mean patients might be 500 miles away from a clinic. Now imagine you work for minimum wage and are a parent of three children weighing the cost of your procedure with keeping the lights on, missing work and finding child care. Imagine that you must consider forgoing post-operative antibiotics and painkillers to pay for a bus ticket, and that reaching out to your community is not possible because you will be seen as a murderer, a harlot, a lazy welfare queen. You call a hotline number that you find online so that a stranger can go with you, as you’re not allowed to leave the clinic alone, and no one in your neighborhood can know that you took your life into your own hands.

At the Magnolia Fund, we receive calls like this a lot. We serve Southerners traveling to Georgia for abortion care, so we’re hearing from folks in six different states. As restrictions ripple through Dixie, our call volume swells. In December of last year, it doubled. In May of this year, it tripled. This is the direct result of Targeted Restriction of Abortion Provider (TRAP) laws, which toy with which week after their last menstrual period a person may get an abortion, and require clinics to invest in exorbitantly expensive, medically unnecessary equipment and renovations for a procedure that is statistically safer than labor. Getting a caller to a doctor who’s allowed to help them requires drivers and escorts, last-minute hotel rooms, collaborating with funds in and out of state, assuaging callers that this choice is theirs and dismantling stigma that teaches people they are evil or will harm themselves by seeking the care they need.

Magnolia is an abortion fund, which is a common misnomer: Funds do a lot more than help pay for abortion. We are as concerned with helping people pay for the medical procedures they need as with dismantling the stigma and systemic barriers that make them difficult to access. This means celebrating our victories, and it also means acknowledging that counting it a victory is disappointing. Tripled calls from people trying to feed their children, finish school or simply survive who can’t afford safe, legal abortion does not represent steady improvement from when my grandmother witnessed Roe v Wade.

Magnolia Fund hosts a Reproductive Justice Happy Hour monthly. Our next meeting is Thursday, July 7 from 6:30–7:30 p.m. at Hi-Lo Lounge. Join us for conversation, collaboration and celebration of the ruling. You can also volunteer, donate or share news on TRAP laws and resources for your community with Magnolia Fund and Access Reproductive Care Southeast. Because, frankly, this is not the legacy my Nana should have to leave behind.

Thank you to Oriaku Njoku, co-founder and executive director of ARC-Southeast, whose insight was invaluable in the writing of this piece.

Prosper Hedges is a board member at the Magnolia Fund.