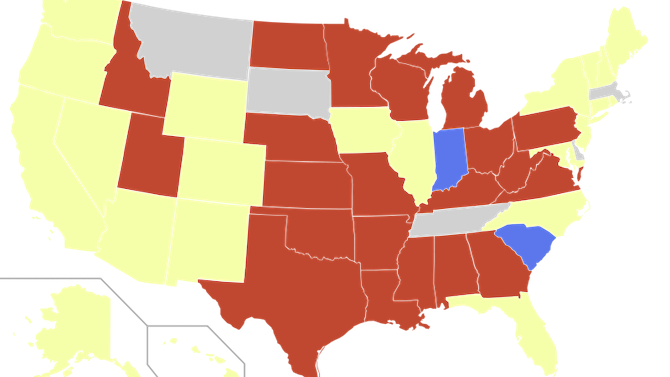 Tracking the Trump Administration’s attacks on reproductive health-care access and abortion feels like grabbing at quicksand. Anti-choice legislators are acting swiftly on the state and federal levels, and their tactics are shifting constantly.

Last month, Arkansas Gov. Asa Hutchinson signed into law a bill banning dilation and evacuation abortions, used in 95 percent of second-trimester procedures, effectively cutting off access after 14 weeks of gestation in his state. The law also includes an alarming clause that arms the spouse or parent of a person seeking an abortion with the ability to sue the abortion provider, including in cases of rape and incest, in order to prevent the procedure.

In January, Kentucky Gov. Matt Bevin signed both a 20-week abortion ban and a law requiring that people seeking abortions be presented with an ultrasound. In Texas, a federal judge only forestalled enforcement of a Texas rule mandating that fetal remains be buried or cremated with a legal injunction.

In Pennsylvania, the state Senate passed a 20-week abortion ban, with no exception for rape, incest or fetal anomalies (typically not detectable prior to 20 weeks). Democratic Gov. Tom Wolf is sure to veto the ban, but the measure’s passage through the formerly blue Pennsylvania Senate marks an emboldened anti-choice presence.

In Utah, a House Committee has voted to advance a bill that would require providers to tell patients that drug-induced abortions can be halted midway through the procedure, though the American Congress of Obstetricians and Gynecologists says there is no evidence backing this claim. Similar legislation has been introduced in North Carolina and Colorado (though it was resoundingly rejected by the latter).

Florida and Iowa are both considering legislation that would allow women to sue abortion providers not just for malpractice—a standard legal parameter for medical procedures—but for emotional duress. And in Oklahoma, legislators pre-filed about a dozen other bills restricting abortion access for the legislative session that began Feb. 6, including a horrifying “spousal consent” bill that would require the father of a fetus to approve an abortion before a patient could obtain one. Spousal consent was deemed unconstitutional in a 1976 U.S. Supreme Court case.

Lawmakers are failing to protect people that carry pregnancy to term, as well. In South Dakota, a bill that would have helped protect pregnant women from employment discrimination died in committee, while measures to restrict abortion, such as a ban on dilation and evacuation similar to the new Arkansas law, advanced in the House.

The types of restrictions vary, but their deceptively worded efforts to “protect women’s health” and contrastingly harmful effects are the same. Just last summer, the Supreme Court deemed such laws, known as Targeted Regulation of Abortion Providers or TRAP laws, unconstitutional and dangerous. TRAP laws, the ruling stated, place an undue burden on people seeking abortion, in many cases making the procedure so inaccessible as to be impossible to obtain. Almost 300 TRAP laws have been enacted since 2010.

On the federal level, Athens’ own Rep. Jody Hice has proposed an all-out abortion ban with the Sanctity of Human Life Act, declaring that legal personhood begins at conception. Similar bans have been proposed periodically for the past 20 years and never made it through the House. Perhaps more alarming is HB 7, an amendment that would make permanent the Hyde Amendment, which blocks federal funding of abortion and has been renewed annually every year since Roe v. Wade (1973). And to no one’s surprise and broad criticism, President Trump has reinstated the Mexico City Policy, also known as the global gag rule, which blocks federal funding for any global health organization that offers family planning that includes information about abortion.

Fortunately, abortion activists are as nimble as anti-choicers are dogged, and as creative as the opposition is one-track-minded.

Legislators in New York, Rhode Island, Illinois and Colorado have all moved to enact anti-trigger bans (“trigger ban” is a colloquial term for state laws that would automatically ban abortion in the event that Roe v. Wade were overturned) that would amend state constitutions to protect the legality of abortion.

Hawaii Sen. Karl Rhoads has introduced a bill that would allow nurse practitioners, not just licensed doctors, to perform abortions, and an Idaho judge overturned two bills banning telemedicine-supported abortions, which allow people to undergo medicine-induced abortion under the supervision of a doctor via Skype and facilitate access to the procedure for folks in rural areas.

Oregon lawmakers are at work on the Reproductive Health Equity Act, which would ensure free or affordable birth control in the event that the Affordable Care Act is repealed. The Reproductive Health Equity Act would extend to all Oregonians, regardless of immigration status. Immigrant communities are in a particularly tenuous position, and reproductive justice activists across the country are condemning nationwide raids on Central American families as a blight on reproductive freedom. Atlanta has been hit hardest by the increasing ICE raids, and the National Asian Pacific American Women’s Forum (NAPAWF) recently led a solidarity march through the city.

Federally, over 100 legislators have backed the EACH Woman Act, a direct counter to the Hyde Amendment. It protects funding for all pregnancy-related health care, including abortion.

As has been the case for decades, the majority of Americans support safe, legal abortion. Now it’s up to us to ensure that our representatives support legislation that upholds our collective desire for reproductive freedom.