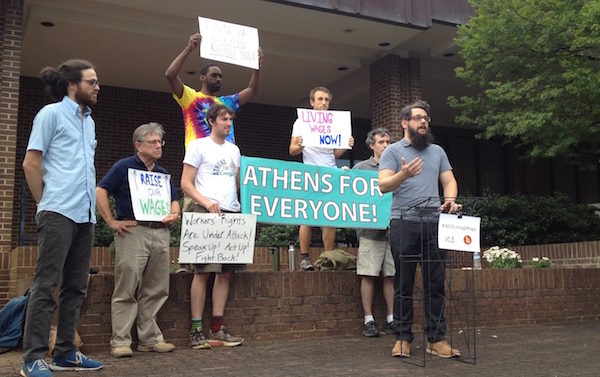 The progressive political group Athens for Everyone is urging the Athens-Clarke County Commission to fund a living wage of $10.16 an hour for all its employees, including part-time and temporary workers.

For years ACC has paid all of its full-time workers a living wage, but according to information obtained by Athens for Everyone through an open records request, 240 part-time and temp workers make less than $10.17 an hour.

“This is going to make a significant difference in their lives,” Drew Hooks, head of the group’s living wage committee, said at an event prior to the commission’s budget work session Tuesday evening.

Bumping up those 240 employees’ hourly wages to $10.16 would cost $78,000, according to A4E. Mayor Nancy Denson’s proposed budget already includes $1.8 million for across-the-board 2 percent raises, so the expense would be “a drop in the bucket,” group member Jesse Houle said.

Budget deliberations continue Thursday and possibly next week, and the commission will vote on the budget at its June 7 meeting. Public input will be taken prior to the commission’s agenda-setting meeting at 7 p.m. Tuesday, May 17 at City Hall.

Greg Davis, a member of the Athens Economic Justice Coalition, praised UGA for paying all of its full-time employees at least $23,000 a year, or about $11 an hour. He said the EJC is now working with UGA to end the university’s practice of laying off some employees when they hit 1,500 hours worked in a year, then rehiring them, so they can be classified as part time.

Davis, who also sits on the Clarke County school board, said the district is raising pay for bus drivers when they drive buses outside of their normal schedule, such as taking students on field trips. All district employees are also set to receive 3–5 percent raises in Superintendent Philip Lanoue’s proposed budget. But Davis did not know much bus drivers will be paid under the new pay plan, nor how many district employees, if any, are paid less than a living wage.

This post has been updated to correct the time of the next public input session on the budget.

The West Broad Garden Is Safe for Now, but Its Funding Is Being Cut