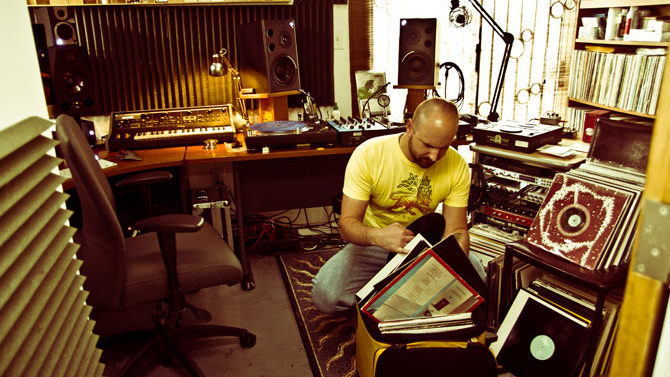 When seasoned touring DJ John Bailey moved to Athens over a year ago, he didn’t know where to start in the scene. Three weeks after he arrived—on Record Store Day weekend—Bailey stopped by Kurt Wood’s front porch record sale and began sifting through a stack of 45s. Noticing a man gravitating toward the same styles, he introduced himself to Mark Weathersby, aka DJ Mahogany. After connecting with other Athens DJs—the Booty Boyz, Daffy Duck and Nate from Wuxtry among them—Bailey began setting up collaborative gigs around town.

“We tried to do some [Georgia Theatre] rooftop events throughout the summer last year, and the ones that didn’t get rained out went off nicely,” says Bailey, who plays as DJ Osmose. This year, he says, “we decided to try again.”

To celebrate summertime spinning, Bailey and nine other locals came together to establish the Wax on Wednesdays series on the Georgia Theatre rooftop. The event focuses on all-vinyl sets, with different DJs exploring different styles every Wednesday through August. Depending on the week, the tunes might feature uptempo funk or chill B-sides.

“Athens is not the biggest DJ town,” says Bailey. “It’s very much a live-music city, and people get set in the things they like to do. It’s hard to talk them into seeing something out of their comfort zone.”

But in the summertime, the divides blur. Once students leave town and townies emerge from their cocoons, dance parties pour onto outside patios at places like Little Kings, Go Bar and Max. Grooving to decades-old hits or obscure favorites, dancers find new friends under the stars. Each week, folks thumb through Flagpole’s event listings to determine where to dance. (“Is Mahogany playing?”)

“It’s amazing that people have met, made new friends and even gotten married and had babies” through these dance parties, says Weathersby. “It makes me feel good to know other people are having fun.”

Some nights, Weathersby leads a one-in-one-out dance craze at Little Kings; on others, he opts for a quirkier, more intimate atmosphere at smaller venues such as Go Bar, Flicker and Manhattan. He envisions other types of dance nights in the future, such as a swing night at The Globe featuring big band hits.

“It’s good to not paint yourself into a corner, to continue to move and evolve,” he says. “I’d love to see people come with more of an open mind and dance to different music.”

For those who prefer a lower-pressure hangout, Bailey established the Friday Afternoon Beer Club series at Live Wire, which focuses mainly on funk, soul and reggae. During one of the early June events, Bailey recorded an instrumental hip hop mix for a podcast created by an “ethical streetwear company” in Germany. The FABC vibe is more relaxed, says Bailey.

“I’m a big proponent of trying to get happy hours going,” he says. “It’s a nice way for people to unwind after work.”

Bailey’s emphasis on vinyl-only spinning began with his early days as a DJ in Orlando in the mid-1990s. He stays loyal to records for a level of quality he says CDs and mp3s lack, with their deleted frequencies and limited sound points.

“On vinyl, the actual soundwave is cut onto a disc,” he says. “Everything else has been driven by convenience and storage, not sound.”

Nate Mitchell, who spins around town as DJ Nate from Wuxtry, began showcasing his vinyl collection on Sunday nights at local DIY spots several years ago. Now, he heads up the Loungy Tuesdays series at Manhattan, which features bummerish B-sides from the 1940s through 1970s. “Flip over your 45s, and you’ll find enough slow, sad songs to put together a four-hour set of nothing but blues and deep soul,” he says.

DJ culture in Athens has much room to grow. Mitchell, who works at Wuxtry Records downtown, says he doesn’t see his or other local stores focusing on the 12-inch singles or electronic mixes that top DJs use. Bailey, who is known to friends as JB, is one of the few locals Mitchell knows who actually spins and produces remixes.

“It would be great if more local DJs looked for white label remixes, and we could go that route and order more,” Mitchell says. “I like that JB has different musical interests and brings that to the table.”

Bailey says he plans to stick around town, working to strengthen the DJ scene with his vinyl-only label, Smokecloud Records, which produces reworks in the disco, funk, soul and reggae genres. Still, he says, vinyl will likely always remain foremost a collector’s arena.

“For the short-term, we’re going to see more people playing vinyl—until the next wave of convenience comes through,” he says. “This isn’t the first vinyl comeback I’ve witnessed.”

WHAT: Wax on Wednesdays
WHERE: Georgia Theatre Rooftop
WHEN: Wednesdays, 10 p.m.
HOW MUCH: FREE!

WHAT: Loungy Tuesdays
WHERE: Manhattan Cafe
WHEN: Tuesdays, 9 p.m.
HOW MUCH: FREE!