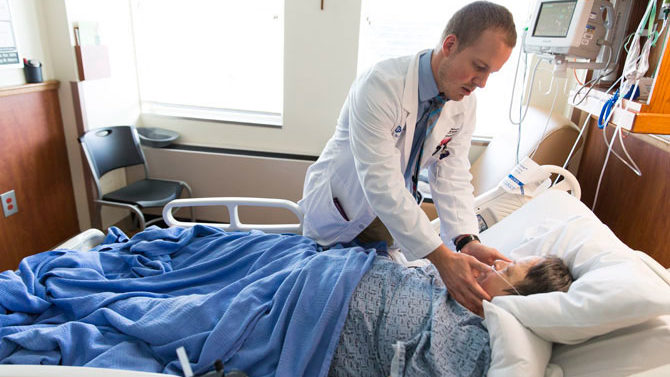 As Andrew Ke puts it, he didn’t wake up one day and decide to be a doctor. Rather, he fell in love with health and medicine along the way, first as an exercise physiology major at the University of Georgia and later as a medical school student at Ross University. Now, Ke is one of 10 new graduates of Athens’ first medical residency program—and he’s ready for the next step.

Ke and his classmates are the first students to complete the Augusta University/University of Georgia Medical Partnership residency program in internal medicine, which focused on creating community-based doctors at St. Mary’s Hospital. Several of the students are staying in Athens—or returning to town after a fellowship elsewhere—to practice medicine in the community. Ke, for instance, is a hospitalist at St. Mary’s.

“There couldn’t be a better place to start my career and continue to learn,” he says. “When you’ve lived a good percentage of your life here, Athens becomes home. To me, staying here brings everything full circle.”

As part of Athens’ first residency program, Ke and his classmates focused on internal medicine as a nod to the state’s need for primary care doctors. The U.S. is expected to face a shortage of 40,000–105,000 doctors by 2030, according to a 2017 report by the American Association of Medical Colleges. As the population grows and more Americans age, they’ll need more doctors to take care of them.

That’s especially true for Georgia, which is the ninth most populous and fifth fastest growing state but ranks 40th in the number of doctors per capita. In fact, Georgia already needs 1,500 more doctors in family medicine, internal medicine and general surgery and could face a shortage of 2,500 by 2020.

“The partnership was born out of the fact that Georgia has a doctor shortage, and we need more medical students training and staying here,” says Michelle Nuss, the partnership’s campus dean and an internal medicine and psychiatry professor.

When medical residents train and apprentice in Georgia, they’re more likely to stay here as doctors, Nuss says. With clinic programs at both St. Mary’s and Piedmont Athens Regional, more Athens residents have better access to health care, too. “People who hadn’t seen a physician in 20 years can now get plugged in and see a doctor under the supervision of our students,” she says.

Next up, UGA’s College of Public Health and St. Mary’s will create a clinical informatics fellowship program to offer advanced training for students in public health, population health and electronic medical records. The program is expected to be approved in late September. The medical school class will expand, as well, by fall 2020, accommodating 60 students per class year.

“The Health Sciences Campus has enhanced the delivery of care here in Athens,” Nuss says. “Having students who can take time to record a medical history, do the physical exam and look at lab results leads to comprehensive care, rather than a short 20-minute visit with a doctor.”

The unique residency program helped the students grow as doctors, too. With a small class size and as the only residents at the hospital, Ke and his colleagues say they gained more exposure to cases and had more time with mentors.

“We knew going in that our class would set the tone for how the rest of the program would be in the immediate future,” says Brian Brewer, who studied biology and exercise science at UGA as an undergraduate student, completed medical school through the AU/UGA Medical Partnership and was among the class of 10 residents. A former running back for the Georgia Bulldogs, Brewer is now completing a sports medicine fellowship at the University of Kentucky Medical School before returning to Georgia as a community-based doctor.

“Athens has been near and dear to my heart for 12 years, and I tried to do as much with the community as I could in medical clinics,” he says. “There’s more to the city than the campus, and I wish I had acted on that sooner.”