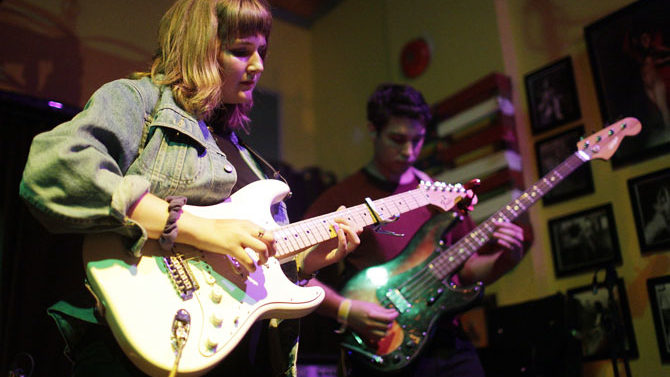 Located near the Pulaski Street stage, the bar annually serves as a safe haven for showgoers and townies alike. Often stacked several layers deep around the bar, the space bustles all weekend with people looking for an indoors bathroom, a cheap cold drink or a rare open spot on the outdoor patio.

After 15 years as an AthFest hot spot, Flicker runs double shifts with bartenders and has the service down to a science. “For us, AthFest is key. It essentially pays for July and keeps us alive,” says co-owner Jeremy Long.

Long and the staff plan each year to make the rough weekend as smooth as possible. Last year, as every year, he went downtown at 6 a.m. Saturday to lug ice into the coolers and prepare for the weekend. For the first time, he had nothing to do that early. They had planned well and were ready.

“We divide up the shifts so everybody gets their piece of the action,” he says. “It’s good to have days like that, when the bartenders can go to it and push themselves and take home enough to pay their rent.”

Across the street, The Rook & Pawn is ready to celebrate its second anniversary during AthFest weekend. When Tim and Carrie Kelly planned to open their new board game cafe in 2015, they marked AthFest as the “must open” weekend.

“That whole weekend became a trial by fire for the staff and concept of the space,” says Tim Kelly. “We were still figuring out how to make the sandwiches, and it helped us make quick decisions.”

Last year, The Rook & Pawn hosted a beer garden with tables outside and sold out of its stock by Saturday. This year, its staff are ready to face the dichotomy of outside beer sales and a cool gaming environment inside.

“It’s an all-hands-on-deck weekend, and we all know it’s going to be 10 a.m. to midnight for three days and then sleep for a week,” Kelly says. “AthFest is a gigantic boon for us and a focal point for the summer.”

Summer sales at The Rook & Pawn don’t fluctuate as dramatically, since families with kids come during the day to stay entertained while school’s out. But AthFest is still the busiest week of the year, Kelly says.

“Carrie and I have been in town for 20 years and love hanging out at AthFest,” he says. “But going back to the original notion of AthFest helping businesses during the summer, we’re so appreciative of that now as business owners being floated during slower times.”

AthFest originated in 1997, after Jared Bailey (then a bar owner, now an Athens-Clarke County commissioner) attended South by Southwest in Austin, TX with 40 Watt Club owner Barrie Buck and talent buyer Velena Vego and wondered if a smaller version could work back home. The Athens Downtown Development Authority director at the time, Art Jackson, persuaded them to hold the event during the summer to give a boost to downtown businesses during the slow season.

“Why couldn’t Athens have this, if Austin had it?” Vego says. “It’s been perfect having the Pulaski stage right here. We’re so lucky to get all the fans coming from the outdoor stage.”

“We’re always happy to see people leave in May so we can find parking spots and eat at our favorite restaurants, but by the end of June, we need them to come back,” Vego says.

The 40 Watt saw lower sales the year the festival required a wristband to enter venues. Now people can buy a full-weekend wristband or a ticket at the door if they want to see a particular show, and sales have bumped back up. This year, the 40 Watt and Georgia Theatre suggested that AthFest organizers approach their year-round ticket vendor—Ticketfly—about sponsoring the festival for ticketing, which succeeded.

“Every year, they ask what’s working and what’s not working,” Vego says. “It feels like a community working together to make this a positive experience.”

As the AthFest coordinator this year, Daniel Robertson pushed for additional changes that he believes will make the weekend better for both patrons and local business owners. A major change, for instance, doubles the size of the all-ages beer gardens at both the Pulaski Street and Hull Street stages. They’ll feature local drafts from Creature Comforts and Southern Brewing Company, as well as local food vendors.

“The intent was to create an environment to make it easier to get alcohol when you want it and enjoy music in front of the stage,” Robertson says. “With the new design, you can walk up to the stage with your beer.”

Nearby, Highwire Lounge will host the VIP area for the weekend, which includes a private area to watch the Pulaski Street stage, an indoor space for relaxing and food and drink access.

As a co-owner of music venue Live Wire, Robertson also sees the benefit to his own business during AthFest. Since the space is located a bit off the beaten path—at the corner of Hull and Dougherty streets—and isn’t open daily as a bar, summer months dip in profitability.

“During June and July, if I don’t have a wedding or corporate event booked, I don’t have much going on,” he said. “We don’t tend to get much walkup business either, so the Club Crawl each year really helps to drive people our way.”

Due to limited resources, AthFest hasn’t conducted an official economic impact study to say how much the festival helps local businesses. However, an informal survey by the Athens Downtown Development Authority of this year’s Twilight Criterium weekend gives some insight, says David Lynn, the ADDA’s director of planning and outreach.

“We know that events are good for downtown businesses overall,” he says. “Restaurants and bars tend to benefit more than retailers, but limited research suggests that traditional retailers see more business, too.”

During Twilight, for instance, 13 retailers said they had a positive experience. Some said it outperformed their typical Saturday sales, and two extended their business hours to stay open longer during the event.

“I thought retailers might suffer in the short-term with roads blocked and parking decks closed, but this is a good sign,” Lynn says. “One retailer even said it was one of their best Saturdays since moving downtown.”

In 2009, AthFest reorganized as the nonprofit AthFest Educates, with a new focus on local arts and music education. Since then, the organization has donated almost $300,000 in grants to schools, community groups and government agencies. (Yet it still struggles to put on the festival, which in spite of all the money circulating is a break-even proposition; most of AthFest Educates’ revenue comes from its annual half-marathon.)

As a business owner and a parent with two young children, The Rook & Pawn’s Kelly says AthFest’s education mission is just as important as the fact that it boosts sales.

“With a son in kindergarten, we already saw the benefits of ukulele and drum lessons,” he says. “The opportunities that these kids are afforded with music are unlike what I had growing up.”

This educational mission is also reflected in what local businesses do, such as teach customers about craft beer, says Chelsea MacDonald, the front-of-house manager at Trappeze Pub. “With music, art or craft beer, it’s about introducing people to something they haven’t tried before,” she says. “We say, ‘I got you. I know you. Let me teach you.’ AthFest creates a comfortable, supportive environment for people to ask questions and learn.”

Energy bustles through Trappeze and Highwire during AthFest weekend, MacDonald adds. Since the servers and bartenders are excited to see the shows, too, conversations revolve around the lineup and what’s happening outside.

“We live through the customers until our shifts are over,” she says. “It’s a comfortable, exciting energy, not manic and chaotic like football game days.”

Although the packed weekend boosts traffic and creates messier bathrooms, a sweaty environment and busy shifts, MacDonald says, customers tend to brighten up as they walk into the air-conditioned space, and reflect it in their tips. “They’re so appreciative to find relief from the heat for a bit that they’re generally nice and ask about our day, unlike on game days,” she says. “They get us, and we get them. We’re here for each other.”

For many of the small businesses around the West Washington Street corridor, the weekend is about survival. Packed venues, mixed with cranky people in the sweltering heat, can make for a miserable time. But each year, businesses prepare for the last weekend in June to be one of the best on the books.

“We’re a small space and probably never designed to host this many people in a day,” says David Eduardo, co-owner of The World Famous. “But when you live through it, you remember surviving it.”

The World Famous, next to the Hull Street stage, often bears the brunt on that side of the street for customers looking to cool down or find an inside bathroom. This year, like last year, the venue will host the Happy Happy Birthday to Me showcase.

“Infrastructure-wise, we’re never going to be able to handle the volume, but we become more prepared every year,” Eduardo says. “We ramp it up, hold on, and hope to survive. Bring it on.”