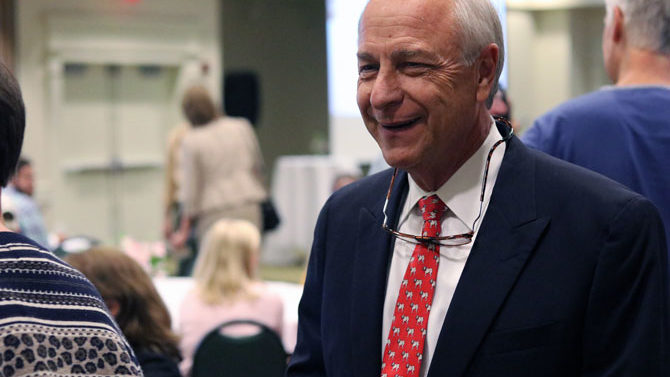 A legal case doesn’t end at the courthouse doors. This simple idea motivated David Sweat throughout his nearly 40-year career, first as a defense lawyer and ultimately as a judge.

When Sweat retired last month as chief judge of the Western Circuit Superior Court—which hears civil and felony criminal cases in Clarke and Oconee counties—he left behind a legacy of modernizing outdated legal practices. He argued against discrimination in favor of fairness and community-wide solutions to address substance abuse, mental health and rehabilitation issues.

“I’ve always said that if we can drag the courts kicking and screaming into the 20th Century, there’s hope that we can get them into the 21st Century,” Sweat says. “Many times, cases that seem unsolvable come up the courthouse steps, and we have to look outside to address them.”

Sweat, who was elected to the Superior Court in 2002, served more than 14 years and was re-elected three times. At the end of July, more than 100 Athens lawyers, court staff, mental health workers and police officers celebrated his retirement in a packed room at the Classic Center. The Mayor and Commission presented Sweat with a key to the city.

“The No. 1 promise he made during his campaign was to be fair, and he has been,” says Commissioner Mike Hamby, who served as Sweat’s first campaign manager. “He worked hard for people’s votes, and I saw that in action during budget discussions with the commission.”

In those discussions, Sweat advocated for a Treatment and Accountability Court, which provides those with mental illness and substance abuse problems with long-term treatment plans to follow alongside their sentences. Created in 2008, the court has kept more than 275 people out of prison while on probation.

“He spent a great deal of time trying to help people find ways to minimize the negative effects of issues that would make them more likely to get arrested again in the future,” says John Donnelly, head of the circuit’s public defender’s office.

Sweat has also supported other accountability courts, such as the Felony Drug Court, Veterans Court, DUI/Drug Court and Family Treatment Court. Last year, he pulled together local criminal justice advocates, health care providers and mental health groups to create the Justice and Mental Health Collaboration, which uses grant funds to help criminals with mental health or substance abuse issues rather than send them back to prison.

“When he was a lawyer, I remember him taking a discrimination case that his colleagues said wasn’t worth the time and trouble,” says Probate Court Judge Susan Tate. “He always said that if we really believe someone is suffering an injustice, there’s always a way to right that wrong.”

Sweat also pushed for sales-tax funding to build the diversion center, a sort of halfway house that opened in May 2012 and houses more than 50 nonviolent offenders, allowing them to work and support their families instead of languish in prison.

“Court can be a scary and confusing place for many people… and they will tend to agree with anything a judge says,” says Edward Brumby, chief assistant public defender. “By asking open-ended questions, Judge Sweat made sure people weren’t being rushed through a decision they didn’t understand.”

Under another SPLOST proposal, Sweat started a technology-driven case management system that better organizes information across several courts in Athens, incorporates video conferencing and allows court agencies to share real-time data. A new grant requested this year could pair a mental health professional with law enforcement officers during crisis situations related to domestic violence, substance abuse and mental health. Along with other judges, after evidence emerged that private probation companies were overlooking violations so they could keep collecting fees from probationers, he pushed to bring the program in-house.

“What attracted me to Athens at first is that it’s a place for second chances. People can reboot themselves,” Chief Probation Officer Dale Allen says. “When we started probation services nine years ago, the judges said they wanted to bring compassion, transparency and humanity to the table.”

At the state level, Sweat served on the Council of Superior Court Judges’ Uniform Rules and Accountability Courts committees. Once he became chair of the former committee in 2012, he created new rules for courts across the state, and Gov. Nathan Deal appointed him to the Georgia Commission on Family Violence in 2015.

“Serving as a judge is more work than people realize, in terms of the emotional and mental strain,” defense lawyer Mo Wiltshire says. “I witnessed Judge Sweat on the bench many times, and he tried to make a difference and treat everyone the same.”

Sweat’s legacy won’t stop here. Gov. Deal will likely appoint him to become a Superior Court senior judge to serve in mediations, arbitrations and judicial settlements. Deal will also appoint one of three finalists to serve the rest of Sweat’s term, which ends Dec. 31, 2018. (See City Dope on p. X for more.)

“I like to dig into cases and understand them. Even criminal cases have a larger picture when you incorporate the other party, the family members and the community,” Sweat says. “I try to find solutions that improve the mess at hand, but also the community as a whole.”

In the meantime, he plans to travel around the country with his wife, Kay Giese, who retired as ACC Municipal Court Judge in 2010. He also plans to spend more time with family and friends, including many of the people he met while a lawyer and judge.

During his retirement reception, Sweat gave special recognition to his staff, court deputies and bailiffs who often don’t receive applause for their daily actions that keep courtrooms running smoothly.

“When you see a judge on a bench, you don’t see all the people who make the job easier,” he says. “I’ve always felt that if we could work hard and do it together, there was no limit to what we could accomplish.”