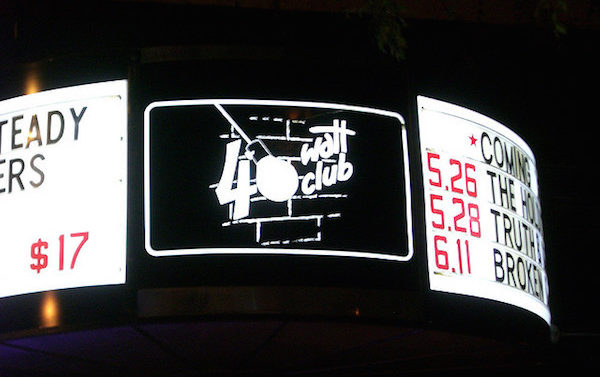 Dozens of pieces of music equipment were stolen from the 40 Watt Club during a break-in this morning, according to Athens-Clarke County police.

Many of the items are engraved with “40 Watt,” he said.

Epifiano said tonight that he is not aware of any suspects.

Check back to flagpole.com for updates.

UPDATE: R.E.M.’s Mike Mills and Cracker’s David Lowery say they are offering a combined $10,000 reward for information leading to the arrest and conviction of the thief (or thieves):

Let’s light this up, people. No resale of this equipment anywhere. I’ll add 5K to @davidclowery #40WattClub https://t.co/00ukdiPTM4

Here is the list of missing equipment, according to 40 Watt staff:

UPDATE: ACC police announced on their Facebook page early Wednesday that a suspect in the case has been identified and arrested, and the stolen equipment was recovered.

The Banner-Herald identifies the suspect as 36-year-old Michael Simpson Wilson. According to the Atlanta Journal-Constitution, a pawn-shop owner in Greenville, SC, recognized the equipment from media reports when Wilson tried to sell it to him. He contacted ACCPD, which reviewed security footage with club owner Buck, who identified Wilson as a former contractor for the 40 Watt.

As was reported earlier this week, ACCPD officer Nathaniel Franco’s incident report of the burglary noted the possibility that it was an inside job: “I think it is also possible that someone with a key entered and committed this burglary and ‘staged’ the damage to the back door to make it look like forced entry was made,” read the report.