Can New Madrid Put Athens on the Map (Again)? 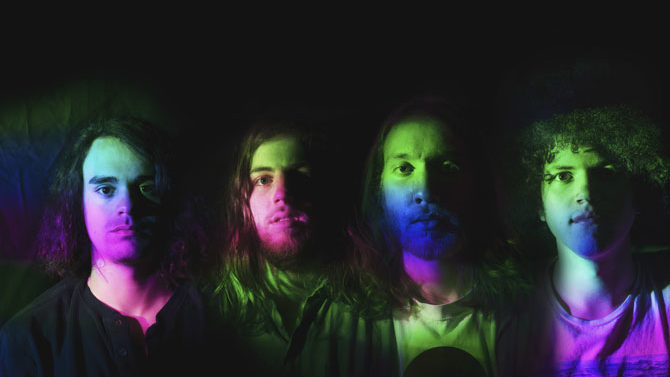 Shortly after pulling up to the farmhouse just outside of Athens that serves as New Madrid’s living and rehearsal space, I am greeted by guitarist Graham Powers, Fender Jazzmaster tucked under his arm. When I comment on how the place would be difficult to find without precise directions, Powers smiles widely and says, “We haven’t had any noise complaints out here.”

The vast, wide-open space that comprises the local group’s living quarters is analogous to its sound. Powers, along with bandmates Phil McGill, Ben Hackett and Alex Woolley, moved into the house between the 2012 release of New Madrid’s reverb-soaked debut LP, Yardboat (Flagpole review), and the construction of its strong upcoming second album, Sunswimmer (Flagpole review). With all members now residing in Athens (Powers, Hackett and Woolley moved here from Tennessee) and a critical buzz slowly building, New Madrid seems poised for big things.

Indeed, although it certainly isn’t uncommon for bandmates to live together, the group’s members see their cohabitation as an added opportunity: to get used to the close quarters they will experience sweating in a tour van for months on end. “Living together, we’ve figured out each other’s quirks and personalities, which has helped us out on the road,” says Powers.

For McGill, the 11 songs that became Yardboat, an album that was recorded in only three days, represented “just a little taste” of what New Madrid had to offer. Working on Sunswimmer, “we listened to Yardboat, and naturally we had things we wanted to change, to grow outward,” adds McGill. “At the same time, it does work congruently [with Yardboat], because we’re still playing those songs live and the new songs make it into the sets naturally.”

The new album’s matured sound owes a lot to band members’ decision to approach the record more deliberately than their debut. According to Woolley, for the first LP, they “weren’t really going into the studio to make Yardboat. We just had three days with [producer] David [Barbe], and that’s what came out of it.”

Although New Madrid recorded much of Sunswimmer back at Chase Park Transduction with Barbe again at the helm, the album is noticeably tighter, emphasizing hard-edged rock as much as washed-out folk-pop. Powers credits the alteration in aesthetic to the fact that the music was whittled down during the recording sessions. The band started with over a dozen songs, but only seven made the cut.

Still, this intensified focus doesn’t mean that the group’s live performances will be exact replications of what’s on the record. “We can embellish—not jam—but add character to the songs,” says Powers.

The album doesn’t just differ from its predecessor in terms of sonics. New Madrid’s new release is its first co-venture with Normaltown Records, the startup label based out of Athens with ties to influential indie New West Records.

After initial talks revolved around releasing a single on Normaltown, the band soon realized the label wanted much more. “Originally, we weren’t even thinking about a big thing. [We wanted to do] a seven-inch or something,” says Hackett. “[But Normaltown] said, ‘Rather than doing something small, let’s do this, and put out a whole album’.”

It is shocking, when you get away from Athens, to think about how special it is.

New West’s George Fontaine, Jr. says the relationship “just made sense,” since it formed organically. Fontaine says he became aware of New Madrid by seeing the band performing around Athens before asking it to play a few New West-sponsored showcases at South by Southwest in 2013.

The group’s members don’t take the affiliation lightly, but also don’t think getting signed has changed their work ethic all that much. “They’ve given us total creative control. They’re excited about the new album as much as we are,” says Powers. For Woolley, letting the label take care of the business end of things freed up the band to focus on what it does best. “This time, all we had to worry about was when we had to record,” he says.

In addition to the newfound label support, New Madrid has also enjoyed a burst of buzz after a recent positive review of Sunswimmer‘s lead single, “Manners,” appeared on the influential music website Pitchfork. The band chalks the attention up to Normaltown’s promotional efforts. The label has a “great new PR team… They’ve been able to do some surprising things,” says Powers. (The group will help its new label promote Sunswimmer by embarking on an extensive U.S. tour this spring.)

The record release show this weekend will represent another first for New Madrid. When the band’s members reflect on the Athens venues it has played over the past couple years, it occurs that they’ve played almost all of them—except New Earth, where they will perform Saturday. But wherever the group plays in town, the large and excited crowds that show up still manage to humble and surprise.

“It is shocking, when you get away from Athens, to think about how special it is,” says Powers, when asked how hometown crowds compare to those outside the Loop. Woolley concurs. “Athens is always on your mind.” Hackett cites the number of out-of-towners who continue to ask New Madrid about its hometown as proof that he is involved in a very special scene.

“We will go places, and venues will advertise that we’re from [Athens]. People will ask us, ‘Is it still great?’” As if on cue, the rest of the band answers Hackett’s rhetorical question in unison: “Oh, yeah. Definitely.”

WHO: New Madrid, Spaceface, The Woodgrains
WHERE: New Earth Athens
WHEN: Saturday, Mar. 1, 9 p.m.
HOW MUCH: $8