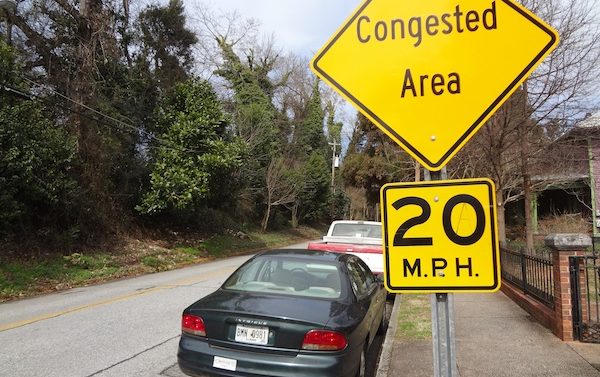 Athens-Clarke County Commissioner Kelly Girtz held an informal meeting Monday night to discuss the possibility of changes within the Pulaski Heights neighborhood. Points of recent concern in the neighborhood include non-resident street parking, traffic congestion and ultimately the effect these problems have had on pedestrian safety.

“I’m confident some kind of combination of traffic calming is likely, if we qualify,” Girtz said. “I’m most eager to get a sidewalk from Prince to the railroad tracks… Safety is my main goal.”

Sidewalks: It seems like a simple enough solution for improving pedestrian safety, but out of all of the proposed measures, extending the sidewalk (which now peters out not far from Dougherty Street) is by far the most unlikely solution in the near future. According to Girtz, there are currently 162 formal requests for sidewalk construction throughout the county. These requests are placed in order of priority based on a set of 11 weighted criteria. Based on these criteria, Pulaski Street is currently somewhere in the top 20 on the list. Clark estimated that funding for sidewalk construction averages $400,000 per year, enough for two miles of new sidewalks. That puts Pulaski about ten years away from seeing wet cement.

Traffic management: The goal would be to slow traffic by making it more difficult for drivers to speed through the neighborhood at unsafe speeds. In Athens, traffic calming usually takes the form of speed humps or radar speed signs alerting drivers of their current speed compared to the posted limit. Before any action can be taken, though, traffic engineers in transportation department need to conduct an evaluation of the neighborhood’s traffic flow. If the evaluation proves that Pulaski meets yet another set of criteria to warrant traffic management, the department will propose measures for the community to vote on. Girtz said he expects residents will support the initial evaluation, which would likely happen this fall.

One-way street: Because of Pulaski’s narrow breadth, newcomers may mistake it for already being a one-way street. Just like traffic management, moving forward with this idea is contingent upon the traffic flow evaluation.

Parking permits: Now here’s a solution which is actually feasible: requiring residents who wish to park on their street Monday-Friday, 9am-5pm, to display hanging permits. Many other intown neighborhoods, especially those where students like to park and walk to class, already have such a program. The cost is $10 per household for two permits (more can be purchased for an addition charge). Many people at the meeting were unenthusiastic about it, though, saying it feels kind of like putting a Band-Aid on a headache.