Califone Teams Up with Undertow for a Living Room Tour 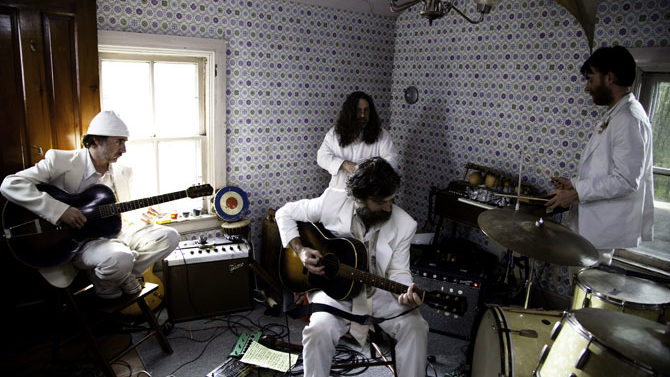 Califone is used to traveling in unfamiliar territory. For the band’s last album, All My Friends Are Funeral Singers, Tim Rutili and company produced an accompanying feature-length film, a 90-minute visual journey involving superstitions and ghosts playing music. This week, via Dead Oceans, the band releases its 10th full-length record, Stitches, a collection of songs that Rutili describes as his most vulnerable to date.

“These songs needed clarity,” says the bandleader, who moved from Chicago to Los Angeles roughly six years ago.

Rutili (who also fronted Red Red Meat, a band on Sub Pop’s roster in the ’90s) is reticent to answer questions about the content of his new record. “I’d rather people listen to this for the music rather than some story,” he notes while discussing the album’s personal nature. “It sounds like the landscape out here… I wanted to make music that sounded like there were no clouds in the sky.”

To celebrate the release of Stitches, Califone teamed up with filmmaker Braden King and programmer Jeff Garneau to create a music video created from content generated by Tumblr users. But the promo piece isn’t the only unorthodox device Rutili and Califone will use to draw attention to their new album. In addition to a more standard club tour to promote the album, the band has partnered with the Undertow Music Collective and will embark on a 15-date living room tour, stopping in Athens on Wednesday, Sept. 4—a day after the band officially releases Stitches.

Where in Athens will Califone be playing Wednesday evening? You’ll have to buy a ticket at undertowtickets.com to find out. Undertow’s living room shows are simultaneously public and secret; only those who purchase a ticket online will be given the address where the performance will take place.

Although the band isn’t a part of the regular Undertow roster, Rutili reached out to the firm when his son caught David Bazan (formerly of Pedro the Lion) play a stripped-down set at someone’s house and suggested that Califone follow suit. After a bit of hesitation, Rutili reached out to Undertow. A few trial runs worked well enough, so a longer tour to promote Stitches was organized.

The brains behind the idea of having established artists like Califone play shows in fans’ homes is Bob Andrews, a man whose music biz resume would make any alt-country aficionado blush. Having been the tour manager for Uncle Tupelo, as well as early-era Wilco, Andrews joined the Undertow team in 1996, where for the last several years he’s served as artist manager and ringleader for the management firm’s living room tour series, which has featured artists like Bazan, as well as Will Johnson (of Centro-matic), Anders Parker and Rocky Votolato.

According to Andrews’ story, the business model began modestly and honestly enough. He and Bazan were having beers in someone’s basement. Bazan admitted he wasn’t exactly enjoying the long break between completion of a solo record and its release when Andrews suggested that he play shows in living rooms to keep busy and make a little money.

To say the experiment worked would be an understatement. Within a few days of a blog post requesting fans to open up their homes, Andrews received somewhere in the neighborhood of 300 emails. When it was all said and done, Bazan wound up booking two living room tours, with around 40 shows selling out soon after they were announced.

“The first David Bazan living room tour was really scary and exciting,” recalls Andrews. “Every night I’d expect the ‘Dude, this is a terrible idea’ or ‘I’m being held hostage in a basement’ phone call. But the shows were good, and we knew pretty soon it was going to work out okay. We went into this with no expectations, other than [David] earning enough money to pay his bills before the next record came out.”

Although the shows he’s coordinated with artists like Bazan have exceeded expectations, Andrews makes sure to note that Undertow isn’t interested in managing just any band willing to play in someone’s living room. He says the model only works with artists that already have an established fan base, and that these events rely primarily on the support of the über-fans willing to open their homes to the songwriters they admire.

There are risks in booking shows like these, but as Andrews notes, “There’s a lot of trust being exchanged to make this work. So, we provide as much info as possible to the hosts and fans about how it works [and] what’s expected from everyone, so there’s no surprises or mystery.” If you’re attending a living room show, you can expect an intimate affair; they typically have only 30–60 fans in attendance, which also explains why ticket prices hover around $20—higher than the average club appearance for many of the artists involved.

“The trick is to never think about the money first,” says Andrews when asked about Undertow’s general approach. “If you make music people want to hear, everything usually works out okay. Sometimes not. But we have a much better chance if the music is good. The mission is for everyone to do this for as long as possible.”

Although Califone has played its share of massive stages, having toured with acts like Wilco in the past, Rutili looks forward to playing in small, quiet spaces.

“A lot of [playing living rooms] is stripping away layers and bringing the song down to exactly what it needs.” Rutili says. “There were older songs that I said, ‘There’s no way we can play this in someone’s house,’ and we wound up doing them anyway. Some songs just make their way into the sets. You just find a way to do it.”

WHO: Califone
WHERE: Undisclosed Athens Location
WHEN: Wednesday, Sept. 4, 8 p.m.
HOW MUCH: $20 (undertowtickets.com)