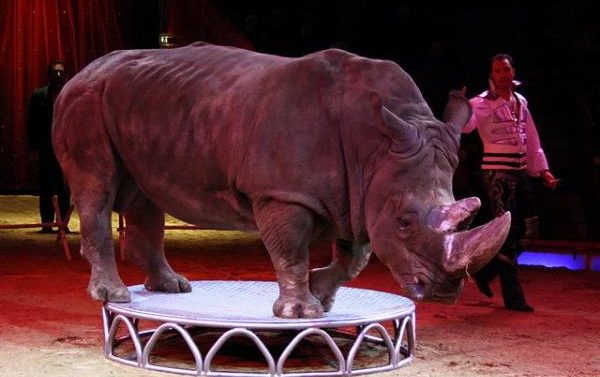 The Athens-Clarke Commission approved arena-style seating for the Classic Center tonight in spite of citizens’ concerns about circuses abusing animals.

Classic Center Executive Director Paul Cramer had mentioned circuses as one event—along with hockey, roller derby, ice shows and others—that could be held in the newly-expanded Grand Hall if it had bleachers, a scoreboard and ice-making equipment that could be installed and removed as needed.

Several speakers objected to the possibility of the circus coming to town.

Many circus animals are caught illegally and sold to dealers that lease them to circuses. where they are transported in chains, beaten, shocked, whipped and deprived of food, said Deborah Stanley and Jennifer McCauley.

“Please do not use my taxes to fund animal abuse,” Stanley said. (No tax dollars are slated to go toward the new equipment, but point taken.)

Wendy Moore said she would seek a ban on displaying exotic animals in Athens, similar to bans in dozens of other cities and countries.

Commissioners, however, approved issuing $5.4 million in bonds for the equipment, as well as 200 new parking spaces and a shuttle to and from other parking facilities for convention-goers, by a 6-3 vote.

Commissioner Kathy Hoard, a member of the American Society for the Prevention of Cruelty to Animals, said a circus-animal ban isn’t needed because the Classic Center would respect commissioners’ wishes to not lease out space to circuses.

“I don’t know about passing a ban on this issue in our community,” Hoard said. “I haven’t studied it enough.”

Classic Center Executive Director Paul Cramer said he and his board don’t support animal abuse, and they don’t need circuses to make enough money to pay off the bonds. A study projected $745,000 in annual revenue from arena-style events versus $500,000 a year for 15 years to pay off the bonds.

“I’m very much an animal rights person,” he said. “I don’t believe we need animal circuses.”

One commissioner who opposed the proposal, Allison Wright, said she was opposed to spending $1 million for equipment for a specific sport (hockey), although Mayor Nancy Denson pointed out that it will also be used for ice shows and open skating.

“It broadens the segment of our community that will use the Classic Center,” Denson said.

“I don’t think the Classic Center needs to be in the transportation business,” Bailey said.

Hoard inserted a clause in her motion that would bar the Classic Center from spending any money on shuttles for 60 days after the bond issue in mid-October. That will give officials time to study whether Athens Transit can provide a downtown circulator that would serve everyone, she and Commissioner Kelly Girtz said.

• Create an amnesty period so you can finally pay the tickets you got downtown and crumpled up in a rage without also paying late fees. After it ends, though, your car could be subject to booting.

• make it easier to start a community garden.

• make it easier to start a community garden.

• change the historic district designation process to give residents more information up front.

• put up public art at the ACC Library.