Modern Skirts Call it Quits, On Their Own Terms 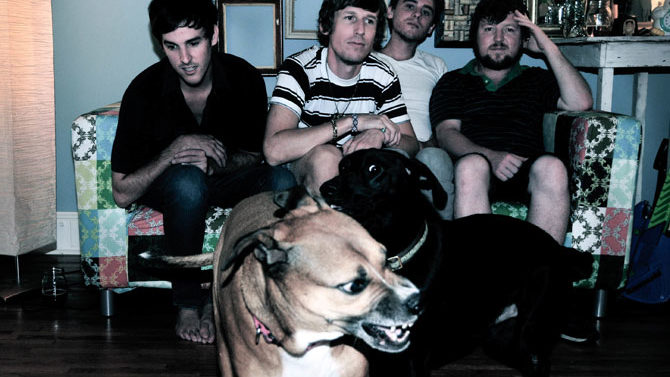 Nearly 10 years ago, a four-piece band with no official name was asked to play a show at Speakeasy. The Athens Visitors’ Center was courting travel writers and needed someone to perform for the sake of local tourism. The band knew the crowd would also contain many local music moguls. The guys—Jay Gulley, JoJo Glidewell, Phillip Brantley and John Swint—named themselves Modern Skirts, purchased a piano from a thrift store and prepared for the concert.

“It was neat and exciting,” says pianist, guitarist and vocalist Glidewell. “It made us feel like grown-ups, instead of playing for drunk people who might throw up in your lap later.”

From modest beginnings, the band quickly garnered momentum at the persistence of its first manager, Troy Aubrey. Within months, it was the talk of AthFest and catching on across the country. The group’s first full-length album, Catalogue of Generous Men, was listed at No. 11 on Paste magazine’s Top-50 Albums of 2005. The Skirts grew a passionate following and threatened to become the next big Athens breakout.

Now, four albums and a decade later, the band is calling it quits. The breakup, although disheartening, comes on amicable terms.

“It was nice to do it on our own terms when we’re all still friends, instead of somebody cheating [with] somebody else’s girlfriend or, like, drug problems,” says Glidewell. “We’ll just sidestep all of that.”
If it wasn’t rehab or relationships gone awry that eventually put an end to Modern Skirts, perhaps it was just time. “It just got to where we weren’t moving forward anymore,” says Glidewell, “and it seemed to be taking a lot of effort to push things forward at all.”

To be clear, this isn’t a break-up-then-make-up situation. Rather, it’s a conclusion that seemed obvious for the band and even many of its fans. The men have each been pursuing their own musical projects and to press on as Modern Skirts would only have constrained creativity. They considered a change in name to go along with a change in sound, but even that route seemed too forced.

“I think Modern Skirts should be the music that we’ve done,” says Glidewell, “and we’ll leave it at that.”

Even with a positive perspective, JoJo Glidewell is not without regret. The group needed a thicker skin, he says. Criticism led bandmembers to point fingers at anyone but themselves, which was, perhaps, a missed opportunity to evolve. Performance anxiety onstage caused lash-outs between bandmates, exhausted by the draining monotony of life on tour. And maybe they never got that Internet thing quite right.

Besides whatever they may have done wrong, the Skirts have spent 10 years living for and from their music—a privilege that none of the four take lightly.

“I realize that my life now—the friends that I have and the relationships that I’ve had, everything I know and use musically now, everything that I do now that I enjoy—my life would be absolutely different if we hadn’t had that experience,” says Glidewell. “Everything I’m doing now is a direct result of the last 10 years of the band being Modern Skirts.”

And the band has had exceptional experiences, making it far past the point of most bands, from Athens and elsewhere. In the summer of 2008 while touring with R.E.M. in Europe, Glidewell recalls that he and singer-guitarist Gulley dashed through the streets of London. As they were running through a busy intersection, one yelled to the other that they should be careful not to get killed two days before their Amsterdam show.

For Glidewell, this memory seems surreal compared to the time the band spends together now on the streets of Athens. These days, members run into each other in their quiet neighborhood and discuss meeting up for potluck dinners. It may not be the same as sharing a European dinner table with Thom Yorke and Michael Stipe—another surreal memory—but they have freedom that fame would have hindered.

And without the burden of building a name, the members of Modern Skirts are enjoying the last of their shows.

“I’m really happy that we’re doing these shows,” says Glidewell, “We just get to play and have the pure enjoyment of doing it without the heaviness of, ‘Are we making it for ourselves? Are we failing? Are we succeeding?'”

Sending out the recent announcement declaring the band’s breakup elicited an unexpectedly emotional response from Glidewell, who says he was torn between relief and regret. He was further surprised by how many people responded to let him know that the Skirts will be missed.

They will certainly be remembered, too, as Athens looks forward to what John, Jay, Phillip and JoJo do next.