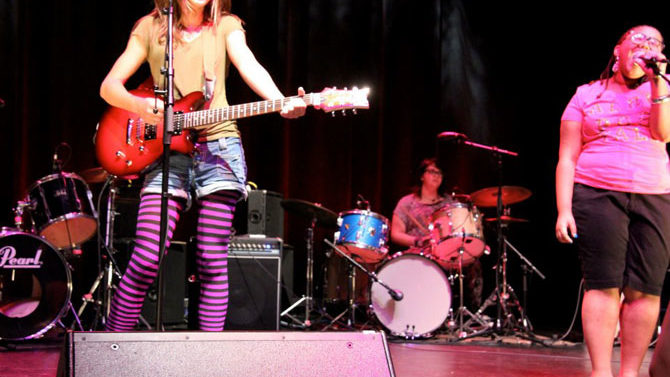 Not every summer camp is all about horseback riding and popsicle-stick art projects. Thanks to Girls Rock Athens, the young women of Athens can spend their summer days beginning their music careers.

Girls Rock Athens is part of the Girls Rock Camp Alliance, which began in Portland, OR in 2007. The Alliance is a coalition of nonprofit organizations that makes it possible for camps to take place in the U.S. and overseas by providing accredited member organizations with the network and resources they need to make an impact on young female musicians.

The first Rock ‘n’ Roll Camp for Girls took place in Portland in 2001. The movement came to Athens after UGA student Calley Payne volunteered at an affiliated camp in Atlanta. Knowing the Athens community would embrace any program that encouraged creativity and self-expression, Payne founded and ran the first Girls Rock Athens camp in 2009.

The Girls Rock Athens camp introduces girls ranging from age 9–15 to the aspects of professional music, and it also gives them the chance to meet positive female role models from the local music scene.

Erica Strout was a part of Girls Rock Athens from the beginning. The first year, Strout performed with her band, Incendiaries. She was amazed by the energy at the camp and felt a connection to the cause it represented. She returned the next year to work as a band coach.

“I found it a really rewarding place to be,” says Strout. “The next year, I took on the role of artistic director, then became program director.”

Strout herself played music from a young age. By requirement, she learned piano at 7. In 5th grade, she started to play saxophone in her school’s band. She experimented with different instruments, played drums in her high school drum line and then turned to guitar out of boredom.

But without an opportunity to meet peers who loved music, like the campers at Girls Rock Athens, playing rock and roll was an isolating experience.

“I do feel like there was a lack of support,” Strout says of her early years as a musician. “A good part of that was that nobody else really seemed interested…

I feel like that would have opened up my world a lot [sooner] than my world opened up.”

During her six years of involvement, Strout has witnessed the camp grow from 12 campers to more than 30 this year.

On their applications, girls identify themselves as drummers, bass players, guitar players or singers. At the beginning of the weeklong camp, they divide themselves into bands. Coaches spend the rest of the week developing the groups, giving individual instruction and dispensing general tips on how to make it as a musician.

The girls spend much of their time each day in workshops learning the basics of making and performing music. They attend and learn from expert volunteers about songwriting, the history of women in rock and roll, stage presence, self-publication, DIY merchandise making and even self-defense. Each day, a local band or performer plays for the campers, which serves to inspire the young music lovers.

When they’re not in workshops, campers receive lessons on their chosen instruments and practice working as a team within their bands. They spend two hours of each afternoon in band practice, writing songs together and practicing what they will perform at the end of the week.

No prior musical experience is required to be a Girls Rock Athens participant. Although girls have the opportunity to learn about being a musician and mastering their instrument, the camp is primarily intended to have an impact on their self-esteem and confidence.

“We want the girls to learn as much as they can when they’re [at camp], but we are more of a female youth empowerment organization,” says Strout.

The first “core value” of Girls Rock Alliance and the affiliated camps is “the power of music as a means to create personal and social change.” At its heart, the program is meant to increase opportunities for women of all ages and to provide a healthy outlet for combatting gender discrimination and inequity of all kinds.

To make sure the organization is as inclusive as its mission statement indicates, scholarships are available to campers who could not afford to participate otherwise. Equipment is also provided for, so that no one is limited by what they do or do not have at home.

By enabling young girls to perform at their individual best and as collaborating members of bands, the campers practice working with the organization’s values of integrity, honesty and respect.

For Strout, the end result is moving. “The first year I was a band coach, there was a girl who was there as a singer but didn’t have a lot of vocal control. So, we talked her into doing this Patti Smith thing, and she did so well. My heart bursts every time we go to the show.”

The hard work and learning from July 28–Aug. 1 culminates in a performance that is open to the public. This year, the campers will perform at the 40 Watt Club on Saturday, Aug. 2.