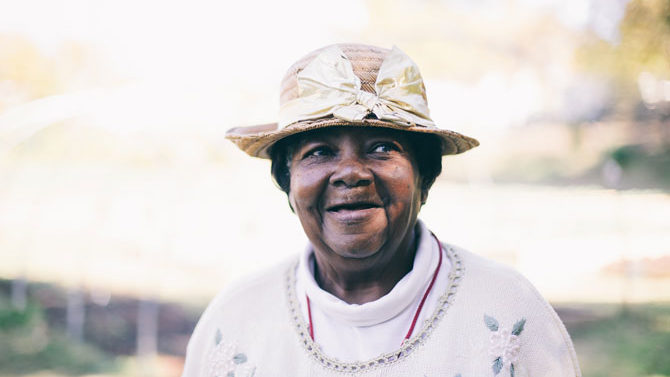 Editor’s Note: The locally grown movement keeps growing and growing, and this new column, The Locavore, will highlight the farmers, entrepreneurs and others who feed Athens with food grown in Athens.

“I believe in my vegetables,” says Ethel Collins, the 79-year-old visionary of the West Broad Market Garden, who can be found most any day of the week with her hands deep in the community.

Collins has had a lifelong love for produce. She was born and reared on a farm in the Wilkes County town of Rayle, where her parents were sharecroppers. When she was old enough to cook for herself and her parents, she departed from their normal biscuits and gravy and started working vegetables into their meals. She moved to Athens in the early 1950s and has been an active member of the community ever since.

Her belief in vegetables took a stronger hold late in life, when she was diagnosed with leukemia. Her doctor suggested that she reevaluate her meal plans to achieve a balanced diet. And it worked. Collins has long since been in remission and attributes her health entirely to the power of eating well.

When Collins caught wind of an organic garden in her Rocksprings neighborhood three years ago, she stopped by to see what she could learn. “What brought me into this garden was the word ‘organic,’” she says. “I wanted to find out what is organic—what’s going on with organic?”

At the time, Fenwick Broyard, now the executive director at Community Connection, was running the West Broad Market Garden that she stumbled upon. The half-acre of land is Athens’ first community-based urban farm (soon to be joined by another Athens Land Trust farm in East Athens). Here, produce is Certified Naturally Grown through bio-intensive growing methods like composting and companion planting.

Along with his colleagues from the Athens Land Trust, Broyard helped Collins become a fundamental part of the operation, and he taught her how to grow crops organically. As she tells it, “I came in the garden one morning, and I met Fenwick at the gate, and I said to Fenwick, ‘You mean to tell me you take all these weeds and all these vines and all this stuff that you can’t sell, you take it and you ground it back up and you mix it up and put it back in the garden, and that’s what you use for fertilizer?’ And he said, ‘Yeah, that’s what organic is all about.’”

She was astounded. The West Broad Market Garden verified her love for vegetables, and the organic practices pointed toward a higher belief.

“God didn’t make no junk,” says Collins. “To take what we call junk and to turn it into real life, to put that into the ground and vegetables will come out of it, healthy and ready to eat, that’s what it’s all about.”

Collins has helped to grow the garden in every way, since it began in 2012. In this time, the garden has produced more than 3,000 pounds of produce, and over 600 of these pounds have been donated to the food ministry of its neighbor, The Light Christian Church. On Saturdays 10 a.m.–2 p.m. and Thursdays 4–7 p.m. during the market season they sell what they’ve grown at the West Broad Farmers Market, 1573 W. Broad St.

The garden now hosts a composting program where about 400 pounds of vegetable waste and other compostable trash is dropped off by Athens residents and picked up from local businesses, diverting it from collecting uselessly in a dump.

The garden also provides a place for learning. “Miss Ethel” and her fellow West Broad gardeners teach Classic City High School students involved in the Young Urban Farmer Program how to grow food and run a farming business. Younger local students often visit on field trips to learn what’s going on, and people of all ages are welcome to volunteer in return for learning experiences and produce.

Collins hopes that organic farming can bring good health to her Rocksprings community. “It brings something positive to this neighborhood,” she says, “and I’m gonna be the one to voice that what we need is a clean street.”

Collins says she has witnessed a transformation already and sees fewer people causing trouble in the nearby streets. Instead, people are taking an interest in what’s growing in their backyards.

The West Broad farmers make a distinct effort to grow foods that their neighbors will enjoy, but they also try to expand their horizons to unfamiliar foods, like kale and eggplant. “But I’ll show them and teach them how to do it, what it’s for, you know?” says Collins. “They’ll get it.”

Collins also shares vegetables with fellow church members. She cooks for them twice weekly and gives demonstrations of new, approachable ways to prepare what comes out of the garden. She uses these opportunities to take a stance to change the norms of eating in her community.

“You can do your fast food or whatever, but please for God’s sake keep that balanced meal whole and wholesome,” she says. “Pay attention to what God gave us and how to use it.”