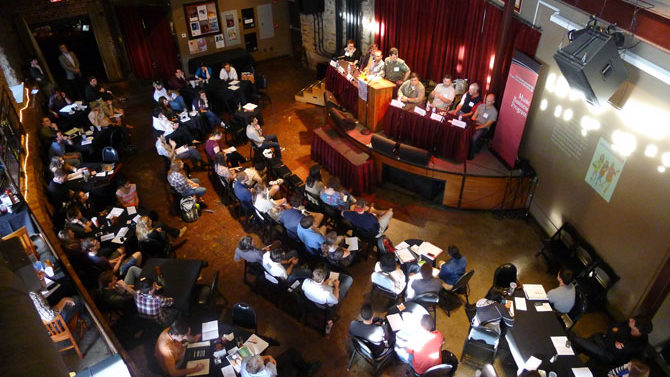 John Seay has seen the band-breaking problems time and again: a copyright issue misinterpreted; a crippling and ill-advised contract signed; a disgruntled split of assets in a band’s musical divorce. And in the digital age, the power that comes with having countless new ways to start a music career is offset by the sobering reality that there are countless new ways to end one.

“The advice used to be that artists should focus solely on their art and hire a team to handle the other aspects of their career,” says the Atlanta-based entertainment lawyer from his eponymous firm’s office. “I’m not sure that ever made sense, and it definitely doesn’t make sense now for the vast majority of artists. I think it’s important to at least be aware of the business aspects of an artistic career, and handle them, up to a point.”

Enter the Protect Athens Music Conference, a joint venture by UGA Law’s Sports and Entertainment Law Society and the university’s Music Business Certificate Program, intended as a preemptive educational strike to help musicians understand new age issues while also encouraging business-minded students who may want to one day work with those artists.

“[The line between business and art] is crossed when an artist is unable to generate revenue by creating art, because he or she is getting bogged down in mundane but important business issues,” says Seay, who will take part in the day’s “Legal Careers in Entertainment” kickoff panel at 3:30 p.m.

“Some artists prefer to be heavily involved in the business side of things, while some run screaming from it.”

Michelle Davis, a university law student and member of the panel’s presenting student society (and former Flagpole music editor), understands that there will be plenty of both types in the audience—and while the subjects discussed by the panel may not be uniquely local, the answers provided should at least keep the latter type from having to run too far.

“We’re putting a face to organizations and resources that Athens artists can start using and are there to help,” Davis says. “So, while the questions aren’t always specific to Athens, the speakers and the resources are.”

Just as the changing reality of the music business isn’t a strictly local happening, it’s also by no means new—different, yes, but not new.

“When I first started teaching law in 1988, one of the early bullet points you could expect to learn in the class was about technological change roiling the industry,” says retired law professor and former R.E.M. manager Bertis Downs, who will moderate the day’s second panel, “The Business of Music,” which will feature former Blake Babies guitarist/current music lawyer John Strohm, among other notables. “There’s always been this tension between music and innovation and technology and copyright law, and people’s ability to make a living in all of that.”

David Barbe, who has a unique perspective on the matters, being a musician himself and director of the Music Business Cerftificate Program, agrees.

“The great news is that there are now an endless number of entrance ramps onto the freeway. Unfortunately,” he laughs, “everyone else can get on, too.”

Discussing the tough issues that face young artists is most relevant when paired with evidence of success, so the artist-specific “Writing, Recording and Touring” panel (moderated by Barbe) will feature a handful of local artists who have come out on top: Patterson Hood (Drive-By Truckers), Julian Dorio (The Whigs), Dottie Alexander (of Montreal) and Ryan Engelberger (Reptar).

“The way that digital media is set up now, it’s so much easier for artists to do so many more jobs that were once reserved for record labels or executives,” says Davis. “Artists have the opportunity to take their careers to the next level themselves, and I think all of the artists on the panel have shown a lot of initiative there.”

The conference isn’t meant as a doomsday seminar. Yes, the issues discussed—starting a legal career, basic business education, digital licensing, viable touring and the sale of recorded music—are complex webs, but, frankly, it’s nothing that hasn’t been survived before.

“When you step back and look at it, the same concerns have existed on numerous occasions for over 100 years. The player piano, music being played on the radio and the invention of the cassette tape and the compact disc—those are all things that were going to kill the music industry,” says Barbe.

“Show up early, stay late, work harder, focus on quality, think on your feet and be nice to people. If you do all of those things, you’re going to do just fine.”

WHO: Third Annual Protect Athens Music Conference
WHERE: Melting Point
WHEN: Wednesday, February 27
HOW MUCH: FREE!