In Minneapolis, the winter that straddled 2011 and 2012 was a record-breaker. For Twin Cities resident Jonathan Miller, it was also a climatological deal-breaker. Miller, the force behind one-man experimental psych-pop act Hand Sand Hands, packed his musical bags and headed south, in search of a scene void of snowmageddons. 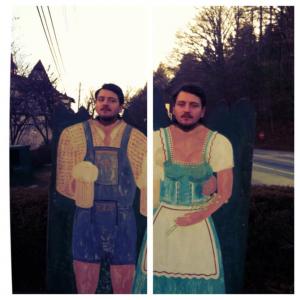 “I had always known about Athens,” says Miller now, a year after settling into his new area code. “I figured that it would be a more open environment, and it really is. I was surprised at how, even if you don’t have a cool name that people have heard of, people will sit down and listen to your set.”

Miller’s artistic journey began when he was a film student. After he fell out of love with that pursuit, he capitalized on the parallels between film and music creation as he began writing his own songs.

“It’s really the same thing for me,” he says. “It’s making a little movie. I can be the actor, the director, the cinematographer. I don’t have to rely on any one person, and I don’t have to get mad at anyone but myself. I can take my time; no one’s going to get mad that everything is taking forever.”

Time taken has paid off. What began as a more straightforward, guitar-focused approach has turned into a delirious flurry of soundscapes anchored by an array of electronic samples, all played and pre-recorded by Miller, loaded into pedals and deftly arranged (on record) or triggered (onstage).
“Most of the time, I’ll just fiddle with noises until there’s one that seems the most original or interesting,” he says. “In my head, I’ll think about how I can use that sound, [and] essentially, I’ll force a song around that particular sound.”

The obvious challenge for anyone who treads in loop-heavy electronica is to replicate a recorded wall of sound in a live setting. It’s a challenge that Miller, perhaps drawing on his film background yet again, approaches analytically, focusing on the experience of his live show as a whole while treating each individual moment with care.

“I want it really loud and enveloping,” says Miller. “A lot of the instruments on the samples are things I played, but [live] I’m not doing anything particularly visually impressive… besides keeping loops in time, which can be difficult. And I’m hunched over most of the time, which isn’t visually impressive. So, I’m trying to make it loud and enveloping, so you lose yourself in it.”

Miller has found more than warmth in Athens. Through the efforts that went into his already released Reded EP and the forthcoming Lord of Talk, he happened upon a collective of bands with which he immediately felt kinship.

“There’s a strange psychedelic climate that’s growing in Athens. I didn’t know about it when I moved here, but now I’ve been playing shows with these amazing psychedelic bands. So, I wanted a platform for these bands to play.”

That platform is an already begun January residency at Flicker, where each Thursday’s lineup features Hand Sand Hands and four other like-minded acts in what Miller is tongue-in-cheekily calling “Weird Fest.”

“I wasn’t trying to be a part of a scene at all. I was thoroughly rejected from any scene in Minneapolis, so I didn’t really expect much from trying to be in a scene anywhere else. I just wanted to be somewhere warmer and make a better album, and it turns out I found some cool people who are into similar things.”

WHO: Hand Sand Hands & Friends
WHERE: Flicker Theatre & Bar
WHEN: Every Thursday in January
HOW MUCH: TBA