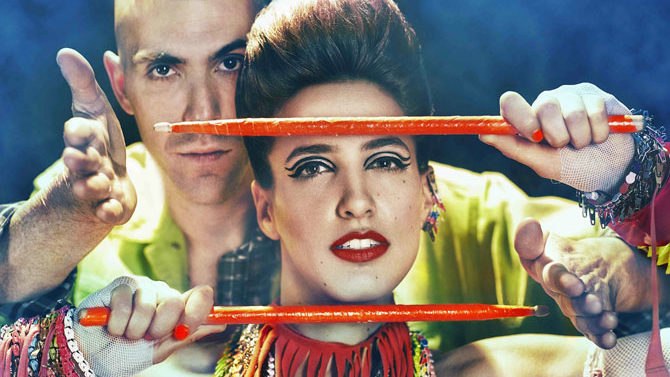 Sagit Shir loves being naked. Don’t misunderstand—she’s fully clothed on the other end of the phone line, steaming toward the next tour stop with her husband and bandmate, Ariel Scherbacovsky. But vulnerability and exposure have been integral parts of dance/electro-pop duo Hank & Cupcakes since it formed in 2008.

“‘Naked’ can mean a lot of things,” says Shir. “There is something about exploring your limits and exposing yourself emotionally or physically. That’s something we experiment with a lot in the band.”

On the surface, Naked is the simple and poignant title of Scherbacovsky (Hank) and Shir’s (Cupcakes) debut full-length album. But it’s also the mantra that the formerly Tel Aviv-based duo brought stateside. The group’s leap-of-faith move to Brooklyn defined a decidedly new direction toward its current sound, which blends high-energy disco rhythms with dense electro.

“We had a band [in Isreal] that was very quiet, acoustic, very gentle music with lyrics by famous Israeli poets. Kind of a heavy project,” says Shir. “We shaped our new sound before we moved [to Brooklyn], actually. We went into a very intensive period for five or six months where we started rehearsing every single day and dedicated ourselves 100 percent. That’s where the sound developed, exploring the ideas of bass and drums on their own. When we came to New York, the energy of the city was kind of like a slap in the face. It… gave us huge amounts of motivation to move forward, and keep on being creative and explore our urges.”

Those urges led to a substantial online buzz and the fulfillment of the duo’s original goal: getting signed, which they did by BMG Rights Management for 2012’s Ain’t No Love EP, a collection that featured three original tracks, an RJD2 remix and a curveball cover of Joy Division’s “She’s Lost Control.” The tracks were part of the ready-made (but consistently delayed) full-length, which was ostensibly set to be released by the same label. But only after a recent split from BMG did the duo officially release Naked, despite the tracks being almost two years old.

The delay could have been a blessing in disguise. Naked already has a cult fan base (the band has quietly been selling the tracks at shows for the past year) yet with the official release, the album has new shelf life. Meanwhile, Shir and Scherbacovsky can write and release new music in short order as a piggyback to any buzz the album may generate, and the meticulous writing process for a follow-up has already begun.

“I usually start our songs on the piano, and we take it into the rehearsal space, and it goes through a metamorphosis and becomes a Hank & Cupcakes song,” says Shir. “Usually it takes a long time. To take a song that was written on piano and translate it into our style, [with] the bass and drums—it takes a lot of time for us to make it sound right. It’s a very limited instrumentation, but we try to make it sound very full and very rich and original and different. We’re kind of perfectionists, so it can sometimes take a few months for us to get a song really ready to go.”

Hank & Cupcakes have largely made their name in a live setting, drawing praise for a high-energy live show and wall-of-sound effect that betrays the group’s simplistic, two person setup.

“[Performing live is] the complete expression of what we are,” says Shir. “We’re very focused on bringing out a lot of energy. It’s an urge we have, but not something that we think about, really. It’s something that, if we don’t do, we don’t feel satisfied with the way we performed afterwards. That’s what makes us feel good, when we give everything we have at a show.”

And as for finding a new label? No rush, says Shir, who says the band is more content than ever.

“Now that we’ve been flopped out on the other side, we’re extremely relieved, and feel like [it’s making our] music stronger,” she says. “We know our place more than we have ever before—that place is to write directly to our fans and the people who love the music. We feel really at home with the fact that there is nothing other than us, and the crowd in front of us.”